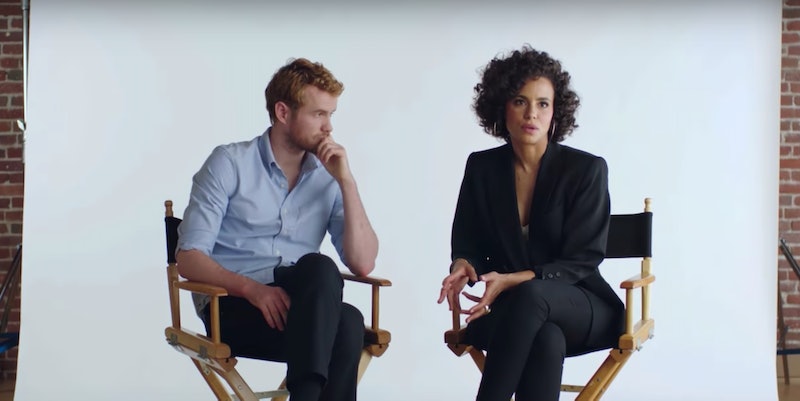 Lifetime
By Kristie Rohwedder
May 1, 2018

In the clip, Fraser says, “At the start of the movie, we find Harry when he is partying and he’s very scrutinized in the press for going out a lot." Ah, would you look at that? Art seems to be imitating real life. Fraser adds, “The journey that Harry goes on through the movie is kind of a real coming-of-age for him in a lot of ways, and him finding himself and making his own mark.”

Like the Prince Harry character, the Meghan character goes through a journey, too. Fitz-Henley explains,

“There’s a lot at stake. She fell in love with somebody who put her at the very center of the world stage. Does she want to continue her career as it’s been, or change it completely? Does she want to move across an ocean?”

Assuming Harry & Meghan: A Royal Romance follows what happened in real life, it looks like the Meghan character in the movie will step away from her role on a long-running scripted series and move across an ocean. Of course, the movie could take artistic license and end with... uh... the Prince Harry character and the Meghan character moving to a space station or something. What a twist that'd be.

“Chronicling the courtship and love story between a beloved prince and his new fiancée, the film will examine the history of Prince Harry (Murray Fraser) and Meghan Markle (Parisa Fitz-Henley) from the moment they met after being set up by friends, through their initial courtship when they were able to keep their romance under wraps, and ultimately the intense global media attention surrounding their relationship and Meghan’s life as a divorced American actress.”

Once again, the Lifetime art imitates life. The real Prince Harry and the real Markle were introduced by a mutual friend in 2016. They hit it off, went to Botswana, and became an item. Their courtship has been lovely and romantic, but it has not been without complications. Prince Harry and Markle’s relationship has received a great deal of attention from the media, and when that attention crossed a line, Kensington Palace addressed it head-on. In November 2016, Prince Harry released an official statement in response to the harassment that Markle and her family have endured. The statement read,

“His girlfriend, Meghan Markle, has been subject to a wave of abuse and harassment. Some of this has been very public — the smear on the front page of a national newspaper; the racial undertones of comment pieces; and the outright sexism and racism of social media trolls and web article comments. Some of it has been hidden from the public — the nightly legal battles to keep defamatory stories out of papers; her mother having to struggle past photographers in order to get to her front door; the attempts of reporters and photographers to gain illegal entry to her home and calls to police that followed; the substantial bribes offered by papers to her ex-boyfriend; the bombardment of nearly every friend, co-worker, and loved one in her life.”

The message continued, “Prince Harry is worried about Ms. Markle’s safety and is deeply disappointed that he has not been able to protect her.” The statement asked members of the press to “pause and reflect before any further damage is done.”

In November 2017, Kensington Palace announced that Prince Harry and Markle got engaged. About a month later, it was revealed that they would tie the knot the following May.

And before they say "I do" later on this month, the dramatized version of Prince Harry and Markle's story will appear on a small screen near you.