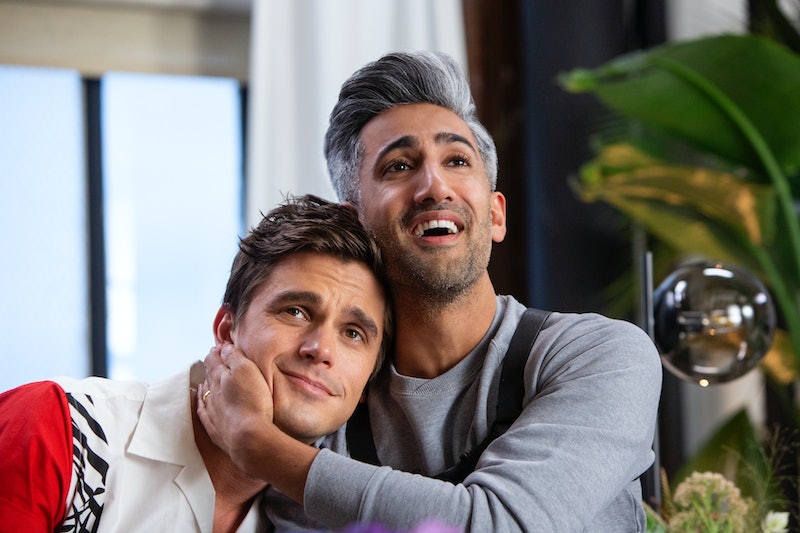 When it comes to the tear-inducing power of Queer Eye not even members of the Fab Five are immune. Case in point, the show's Food and Drink expert Antoni Porowski isn't afraid to shed a tear or two onscreen or off. This week the Queer Eye Season 3 moment that made Antoni cry in Season 3 was revealed. And for those caught up on the latest installment, released March 15 on Netflix and set in Kansas City, Missouri, the emotions are mutual.

Antoni told E! News that while each Fab Five member is doing their own thing throughout the week, Tan teaching the art of a french tuck, Bobby remodeling a home, they don't see some of the most tearjerking moments until they're at home bingeing the episodes themselves.

"Watching the episodes is really interesting," Porowski said to E News. "Because I don't get to see what a lot of castmates, what the other Fabers, do in a lot of their field trips. We sort of talk about it during the week, but we never really know what's going on until we see the episodes."

One episode in particular got Antoni in his feelings and it came relatively early in the season when the Fab Five's heroes were Mary and Deborah, aka "Shorty" and "Little" Jones.

The sisters were undeniable standouts from the season, serving up their famous Jones Barb-B-Q sauce and receiving some much needed TLC from the Fab Five. Mary, though brimming with personality, struggled with smiling because of dental issues. But when Tan and Jonathan accompanied Mary to the dentist to get her teeth fixed, Antoni had a good old fashioned cry. "That just, like, blew me away. I had a really good snot-cry with that one," Antoni said to E News. Us too, Antoni.

Antoni didn't have the same satisfying outcome when it came to finding out the secret ingredient in the sister's now sold out BBQ sauce. "I still don't know what's in it! There is something apple cider vinegary in there…I have no idea. They didn't let anybody see, they're so protective over it. And I really respect that, as frustrating as it is" he said in the same interview.

When Antoni isn't having a cathartic cry or bringing the avocado into every home in America, he's got quite a full plate. (Pun intended.) In September 2018 he opened a healthy fast-casual eatery in the West Village called Village Den. He's also got a cookbook on the way. Plus, he still finds time in the midst of it all to become an unintentional Internet sensation, seated next to a lip-locked Kate Beckinsale and Pete Davidson at a hockey game. (To know the pics is to love them, and relate.)

Not only does Antoni continue to be the multi-tasking food expert we don't deserve, but he consistently wears his emotion on his sleeve. With each new episode of Queer Eye, it's comforting to know that each Fab Five member is feeling just as touched by their Heroes stories as we are. Until Season 4 and the new Antoni content we crave, we'll be rewatching the Jones Bar-B-Q episode and crying along with him.