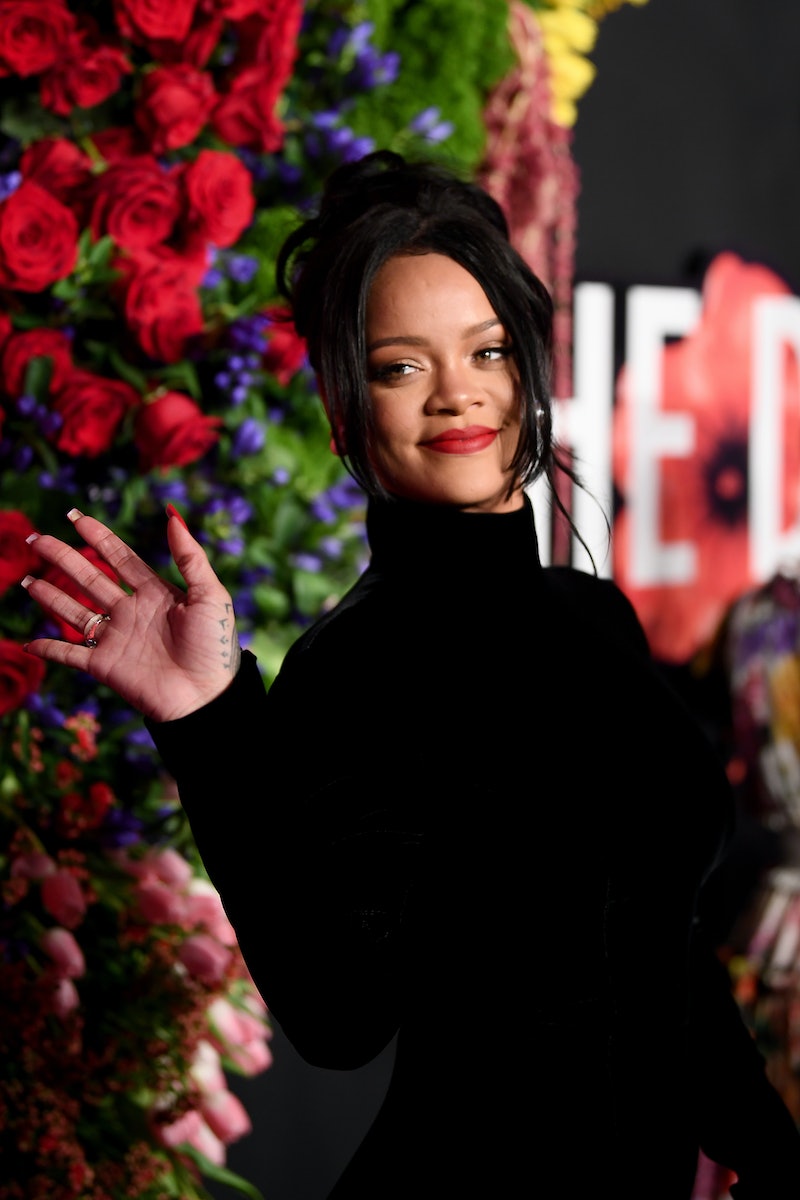 Since Rihanna is one of the most famous women in the world, there's no surprise that the singer has to deal with a fair share of rumors every now and then. As E! News noted, the latest Rihanna pregnancy rumors emerged, thanks to what seems to be a widely misinterpreted quote and a bit of judgment about her body shape. As a result, "Rihanna is pregnant" was trending on Twitter on Friday morning. (Bustle has reached out to Rihanna's reps for comment and clarity on the situation, but did not receive an immediate response.)

Now, her comment, "I'm going to give birth to a black woman," specifically caused some to question whether she meant that literally (as opposed to being a comment about any future children). But when reading the full quote in context, it really seems to be a statement about generational power. In addition to that eyebrow-raising message, some tried to add fuel to the fire by saying Rihanna looked pregnant at the Diamond Ball, simply based on the shape of her stomach, which places unfair scrutiny on her body.

Of course, it's possible that Rihanna's comments were meant to be taken literally and that she is actually pregnant. However, until she explicitly states that fact herself, it's probably best that fans simply let the singer live her life without critiquing every single one of her statements — or her body — in the process.

Unfortunately, this is far from the first time that Rihanna has had to deal with pregnancy rumors (and, in turn, judgments about her body). Over the years, there have been multiple reports and rumors about the Fenty beauty mogul possibly being pregnant. In January 2018, some fans thought that the "Work" singer was expecting because of the look she donned during a Grammys performance, per The Mirror.

According to BET, the baby rumors sparked up again in October 2018 thanks to a parody account. The publication reported that an account called "@StanNEWZ" captured a fake screenshot from Rihanna's Instagram in which she supposedly announced her pregnancy (the account subsequently deleted their message). Their faux report caught on amongst users on the internet, who soon took to social media to spread the rumor. But, of course, the entire report turned out to be false.

Rihanna has yet to comment on the most recent pregnancy rumors, but that's probably because the superstar has other things to focus on at the moment. In addition to celebrating her annual Diamond Ball event on Sept. 12, she just put on her first Savage X Fenty fashion show on Sept. 10 (the special will release on Amazon Prime on Sept. 20). She's also pretty busy with her successful makeup line, Fenty Beauty, and is, possibly, working on some new music.

Basically, Rihanna is too busy with all of her successful business pursuits to concern herself with the latest, silly rumor concerning her personal life. And that's exactly why she remains an unbothered icon.