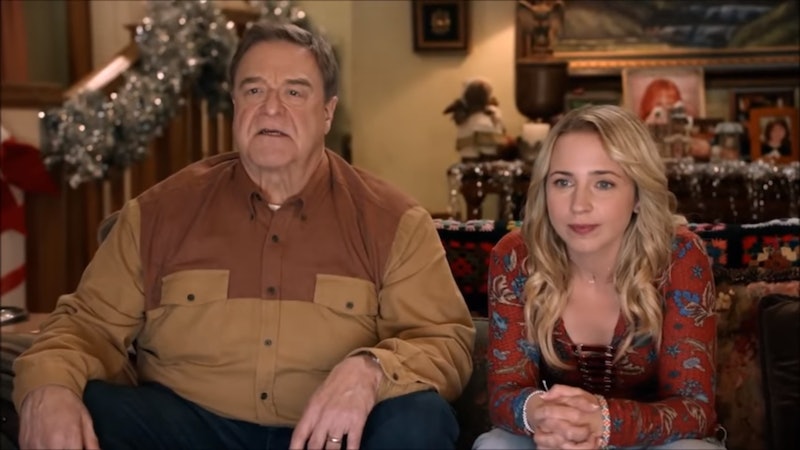 It's no secret that the Roseanne series finale was a bit controversial among fans. The final episode's twist revealed Roseanne had made up details about her family's life, and that her husband Dan was dead. Now E! has revealed that the Roseanne reboot will directly address Dan's "death" in the opening scene. And, you guys, it sounds like it's going to be hilarious.

The reboot is undoing the many curve-balls that the finale threw at the fans, and will instead continue the story of the Conner family as they were before they won the lottery. Rather than simply ignore the strange events of the final episode, it sounds like Roseanne is going to immediately address the living Dan in the room.

In E!'s exclusive new teaser, the original cast reunites for a table read of the reboot's first episode, and the opening lines of the season are seemingly revealed. The opening scene features the following exchange between Dan and Roseanne:

Roseanne: "I thought you were dead."

So did everyone else, Roseanne, so did everyone else. It's comforting to know that the series will at least acknowledge the strange way that it originally ended before diving into this new chapter of the family's life. There's no need for Roseanne to go through all of the plot twists — remember, Darlene and Becky were revealed to be married to Mark and David, instead of the other way around — but given how heartbreaking the reveal that Dan had died was, that's one issue the show definitely needed to deal with.

According to E!, Roseanne Barr revealed at the 2018 TCA Winter Press Tour that the original series finale will be addressed throughout the reboot. With any luck, that means the show plans on continuing to expand the idea that Roseanne has been making good use of the writing room that her family made for her way back in Season 1. While the finale's twists were unexpected, the idea that through all of the ups and downs of life, Roseanne continued to find time to write is beautiful.

For Barr, getting the cast back together again is a way to finally end the Conners' story on her own terms (although, if Roseanne is half as successful as NBC's Will & Grace reboot, ABC might be convinced to keep it around for more than nine episodes). Barr told the press,

"In the original series, I always wanted to have the tenth year so I could do exactly what I did in these nine [episodes,] which was to finish and complete the story of this family. So, I always had that in my head that that was how it would go, and so I'm very happy we got a tenth season and we got to do that."

As for what else Season 10 will bring, a few details have been revealed beyond Dan being alive and well. Darlene and her two kids have moved back home, and her youngest, Mark, is gender fluid. Meanwhile Becky will be seeking to have a child via a surrogate played by Sarah Chalke, who played the second Becky when Lecy Goranson vacated the role. Perhaps the most surprising development is that Roseanne will be revealed to be a Donald Trump supporter — a choice that some members of her family, including her sister Jackie, will disagree with.

Only time will tell if the Roseanne reboot will be able to recapture the magic of the original series. But no matter what happens next, it's reassuring to know that not only is Dan alive, but the show is totally OK with poking fun at its original finale if it means keeping the Conner family together.