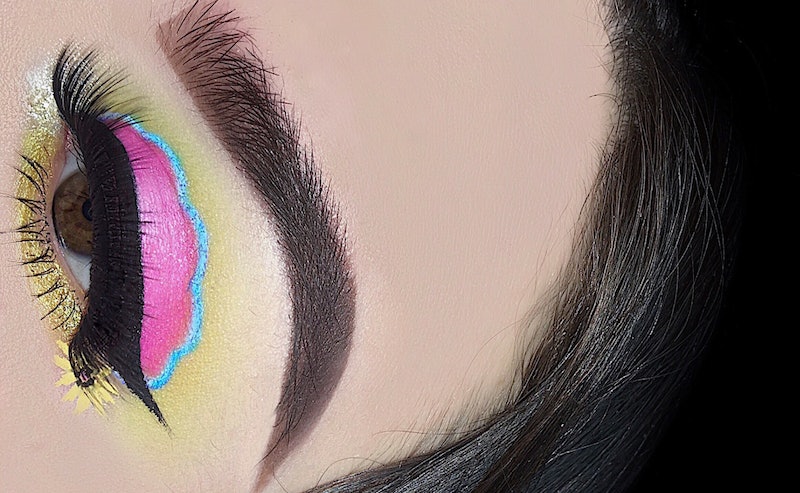 Growing up, there was no feeling quite like parking yourself on the couch or the floor to hear those five little words: "...and you're watching Disney Channel." After all, tuning into your favorite show was everyone's favorite after-school pastime. Chances are you don't spend your weekday afternoons the same way as an adult (sadly), but that doesn't mean you have to abandon your old favorites altogether. Teen makeup pro Gabi Greer has been showing off some Disney Channel-inspired eye makeup on Instagram, and her interpretations are incredible.

Greer's eye artwork is inspired by some of her favorite childhood shows (both Disney Channel and Nickelodeon, because there was always something awesome on one or the other). But the actual makeup is anything but child-like — while the looks use color and design themes from the best old-school shows, they're impeccably done, using pro-level products and tools (which she includes in her captions, in case you want to attempt to recreate).

Some of her handiwork includes looks inspired by shows like Drake and Josh, iCarly, Zoey 101, Danny Phantom, and Fairly Oddparents. Her Disney-inspired creations, though, feel particularly nostalgic. Here are six looks that'll take you right back, in the best way — see if you can guess what they are without peeking at the caption

2. The Best Of Both Worlds

Kim Possible was the true hero of your childhood.

You know you wanted to live in the Wizards of Waverly Place world.

5. A Look Worth Being Proud Of

The Proud Family was one of the most entertaining households on TV.

6. The Future You Can See

Think this That's So Raven eye makeup will give you visions?

Here's a look at all of Greer's show-inspired creations.