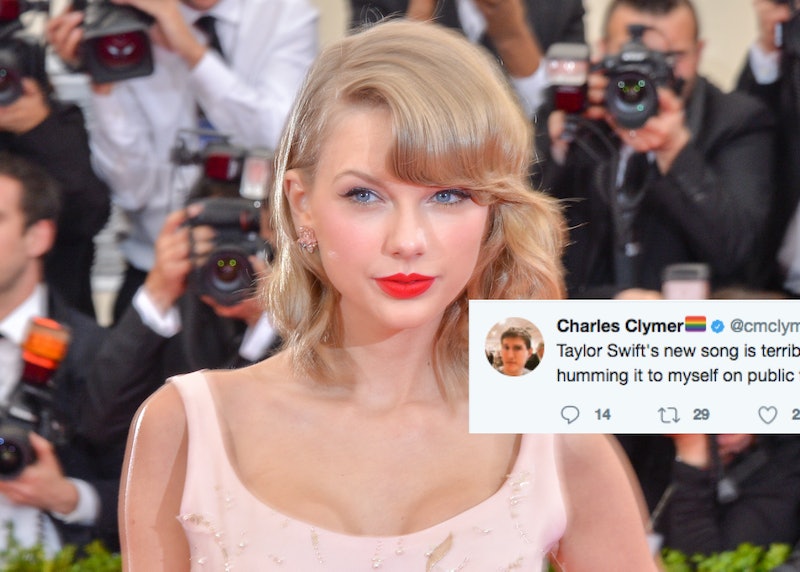 As a certain singer once said, "Haters gonna hate, hate, hate, hate, hate." And obviously, that singer was Taylor Swift. It's almost like she predicted the reaction to her latest single a few years back. But no matter how much flak the new song is receiving, this tweet about "Look What You Made Me Do" flawlessly sums up every Swift hater Friday morning. Twitter user Charles Clymer understands the initial dislike and future obsession begrudging fans know all too well.

"Taylor Swift's new song is terrible, and I give it about five days before I'm humming it to myself on public transportation," Clymer wrote.

Honestly, it's the most relatable reaction thus far. And if you are currently scoffing thinking it won't happen to you, come on — this is Swift we're talking about. She's the same person who made you belt out "Teardrops on My Guitar" and "Shake It Off" and probably every other hit song she's dropped since her career began.

So, sure, bask in your Swift hate right now. Post a meme about that "the old Taylor Swift is dead" line. But before you know it, you'll be on the subway with a beat in your head. Yes, that one that sounds strangely similar to Right Said Fred's 1992 hit, "I'm Too Sexy." Swift's song will nestle its way into your brain. (Sorry, that sounds incredibly ominous.)

And yet again, it's like Swift predicted it. As she sings in this just-dropped Reputation track, "I'll be the actress, starring in your bad dreams." Alright, maybe not actress, but she's the singer starring in your soon-to-be humming. Just wait and see.

At this point, all of us should just embrace it. Sure, the old Swift may be dead, but her new song is alive and well — and you won't be able to get it out of your head.