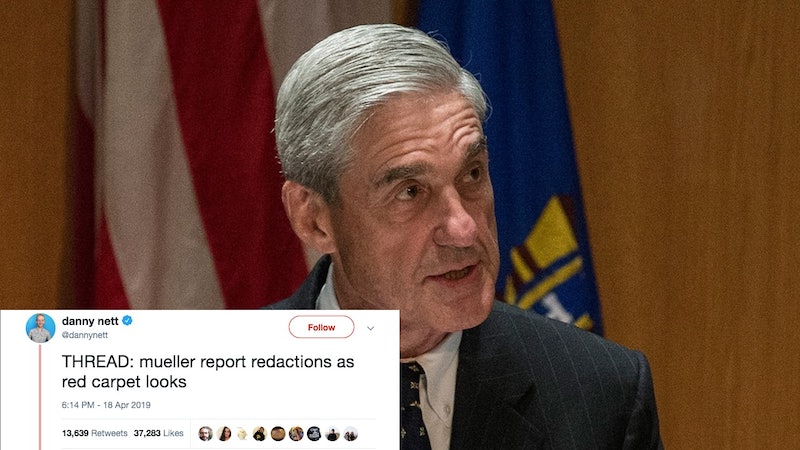 There's not a lot of humor in the news lately but, thankfully, Twitter can help fix that. On Thursday, a Twitter thread of Mueller report redactions as red carpet dresses basically took over the internet. The thread has essentially gone viral now, and it's not hard to see why. It's internet gold, and for politically savvy fashion fans, it may be the best thing you see all day.

While it's unlikely that you haven't heard by now, the Justice Department released the redacted version of Robert Mueller's findings from his investigation into Russian efforts to interfere in 2016's presidential election. On March 24, Attorney General William Barr released a summary of the report, but now, the full (kind of) findings from Mueller's investigation have been released.

However, there is a bit of a caveat to the release. Major sections of the report have been redacted by the Justice Department due to contents deemed sensitive. While opinions about those large swatches of redactions have made their way onto Twitter, NPR Engagement Editor Danny Nett may just have created the best Twitter thread of the day thanks to his comparisons of the redactions to black and white red carpet looks of some seriously famous celebrities.

If you haven't seen Mueller's report, the redacted portions of the document have been blacked out with only a few words, paragraphs or phrases able to be fully seen on the page.

While you probably would have never thought, "Hmmm, that looks like Billie Porter's Golden Globes red carpet look from this year," Nett did, and the result was total genius.

In the thread, Nett took some of the pages of Mueller's report that had major redactions and placed them next to notable red carpet looks that well, kind of resemble the blacked-out sections of text. Honestly, they looks are so on point.

Take Porter's Christian Siriano tuxedo gown that was a stand-out on the 2019 Golden Globes red carpet. Now, it's going viral again thanks to its comparison to the massive redaction from the report. Then, there's Lady Gaga's ruffle and bow number from the 5th Annual Fashion Los Angeles Awards which looks oddly like yet another page.

Given just how expansive the redacted portions of the report on Russian interference are, there had to be an all black look in Nett's line-up, and he chose Kit Harrington's black suit from the 2018 Golden Globes. Of course, what would a black and white red carpet look round up be without the queen or rocking the colors, Janelle Monae? The singer and actor's look is from the premiere of Creed, and it may just be one of Nett's most accurate choices in the whole thread.

Of the idea for the thread, Nett told Bustle, "I think it’s a testament to how much the internet has melted my brain that this thread was the first thing I thought of when I saw all the report pages together." Most importantly, though, Nett was quick to credit his co-workers for their news work explaining that they were doing, "very good and very hard work all day before I got caught up to speed and made a dumb thing on the internet."

People seem to love the "dumb thing" Nett made on the internet and soon began thanking him for bring a bit of levity to an otherwise stressful news day.

Honestly, the thread is applause worth.

As of press time, Nett's Twitter thread comparing red carpet looks to the Mueller report has over 37,000 likes and over 14,000 retweets. Basically, it's a viral sensation, and you have to see it. If you want to peep the whole thread, head over to Nett's Twitter because sometimes, the internet does get it right.