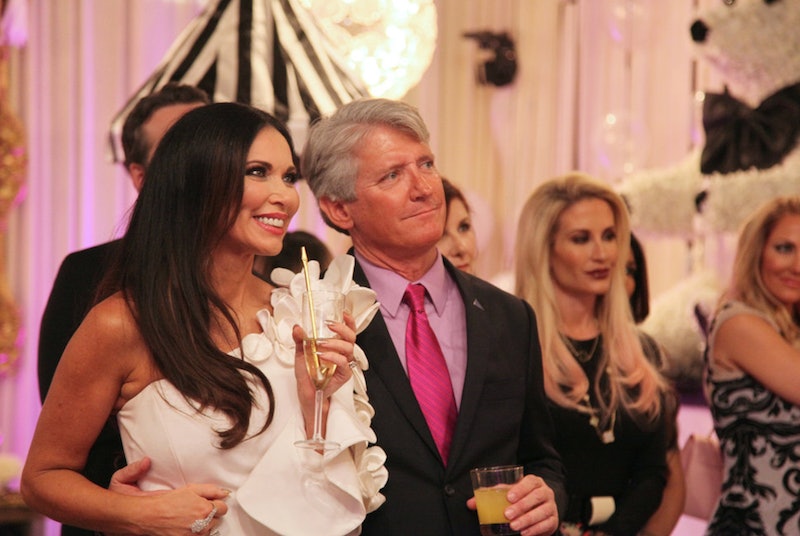 Everyone's favorite bowl-toting Bravolebrity is getting ready to walk down the aisle, and she's got the legal document to prove it. As Us Weekly shared on Wednesday, April 3, Real Housewives of Dallas stars LeeAnne Locken and Rich Emberlin have obtained their marriage license. This LeeAnne and Rich wedding update isn't terribly shocking; we already knew they're getting married later on this month, and you gotta get that license if you're going to make it official. However, it's still exciting to see them get one step closer to their big day. The couple, who we saw get engaged on Season 2 of the Bravo reality series, are all set to tie the knot on April 27.

Bravo has not officially announced whether or not RHOD will be back for round four, but do not worry: Season 3 was not confirmed until April 11, 2018. Also? It looks like the Dallas Housewives have been filming since the end of February, so again, do not worry. This bucking mechanical bull of a reality show is not going anywhere.

And if Season 4's shooting schedule matches last season's, it feels fine to assume that LeeAnne and Rich’s wedding day will be featured on The Real Housewives of Dallas. Because she said as much. When she appeared on Bravo's The Daily Dish podcast last August, she explained, "Yes, I have always said that I would share [my wedding] with our audience because I feel like I've taken them down the journey of watching me get engaged on camera."

She went on to add,

"The wedding is a ceremony that I think people should get to enjoy. I mean, I want you to see if I get nervous or, god forbid, I trip in my wedding dress or my flowers die in my hands as I'm walking down the aisle or lightning strikes me and whole church burns up. Yeah, I want to share all that."

However, it's probably not correct to assume that all of her RHOD colleagues will be there. Again, because she said as much. As LeeAnne told Us, “The wedding is happening, and not everyone is invited.” Huh. How about that. Going to go out on a limb and predict Brandi Redmond is one of the co-stars who did not receive an invitation.

When Entertainment Tonight asked LeeAnne about the wedding guest list back in November, she did not flat-out say certain members of the RHOD cast would not be in attendance, but she did offer up that she “would prefer it to be intimate.” She explained,

And when DailyMailTV broached the subject with LeeAnne in February, she said,