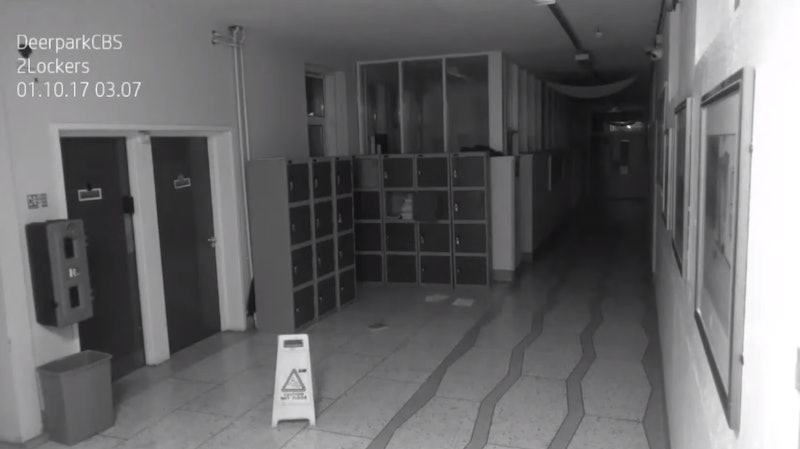 ‘Tis the season for all things spooky, so it’s perhaps unsurprising that this little tidbit is currently making the rounds: A video of an alleged ghost at a high school in the Republic of Ireland has gone viral, giving us another maybe-real, maybe-not supernatural story to obsess over (Dear David who?). Captured by security cameras at Deerpark CBS in Cork, the footage shows an unseen force wreaking havoc on the hallways at about three o’clock in the morning on Oct. 1; the school subsequently posted it their YouTube channel and Facebook page, and, well… the rest, as they say, am I right?

According to its website, Deerpark CBS is the oldest school on Cork’s south side; however, although it was founded in 1828 on Sullivan’s Quay, its secondary school section was moved to Deerpark in 1968. Either way, there’s a lot of history at work here — which, of course, is just adding fuel to the proverbial ghostly fire. Old places just lend themselves to ghost stories so well, don't they?

For what it's worth, if Deerpark is, in fact, dealing with an actual ghost, I think it's likely a poltergeist — a variety of spirit known for its propensity for violently interacting with furniture and other objects (and people). The ghost that flings chairs across the room and scratches or bites people who happen to be present at the time? That’s usually a poltergeist. Indeed, the term itself derives from the German words “poltern,” a verb meaning “to knock” or “to make noise,” and “geist,” a noun meaning “spirit” or “ghost” — that is, a poltergeist is literally a noisy ghost.

The Deerpark video itself isn’t long — it clocks in at a mere one minute and 41 seconds — but in that space of time, four odd occurrences can be seen: First, at about the 13-second mark, a door at the end of the hallway opens and shuts with great force:

Then, at around the 34-second mark, a set of lockers begins rocking back and forth:

At the 58-second mark, another locker’s door flies open, causing papers to spill out:

And at the 1:23-mark, the “Caution: Wet Floor” sign displayed on the floor appears to throw itself across the hall:

So: Is it a ghost, or is it a hoax? The teachers of Deerpark CBS are baffled. “If it’s a prank, we don’t know how it was done,” headteacher Aaron Wolfe told UNILAD. “Motion sensors were set off at this time — that’s how it was caught.” What’s more, said Wolfe, other teachers have complained about this area of the school — which, by the way, is right outside the Religion Room— being extremely cold.

Additionally, Principal Kevin Barry isn’t sure whether they’ve actually captured supernatural activity on camera or whether it’s a “very well-designed prank,” according to Express. For what it’s worth, Barry noted that “it’s a very old building, going back a number of years, and it’s got a lot of history”; he continued, “People in old buildings are always hearing noises and strange sounds, but this is the first time we’ve actually caught something. We’d often come across papers strewn about but we were never able to say what it was, we just assumed it was pupils that were doing it.” Barry also said that none of the school’s other motion-activated cameras leading to that area had been triggered: “Because we have motion-sensor detectors now, we should have been able to detect other people coming towards that area on the other cameras, and we haven’t been able to,” he said.

However, I feel I should probably also point out that the kinds of events seen in this video are incredibly easy to fake. Here’s an example of how it could be done:

I’ve pointed to this video by Duck of Truth a few other times recently — namely when discussing the pet cam footage from the Dear David story — but I think it’s worth drawing attention to again. As Duck of Truth’s video demonstrates, it’s quite simple to rig simple remote-controlled devices that can be triggered offscreen to make things like lockers shake and doors open and close; additionally, the “Wet Floor” sign could simply have been the result of a firmly-tugged wire and some careful editing.

Also, the Deerpark footage seems to be fortuitously timed; the school is currently gearing up for an event it’s running called Fearpark (I see what you did there, Deerpark CBS!) — which, according to the Facebook page for last year’s edition of the event, is a combination haunted house/Halloween party. Kevin Barry even gave the event a plug when speaking to Independent.ie: “We can’t explain the footage, but we invite people to make up their own minds on Sunday, 29th Oct. — we are holding an event at the school called ‘Fearpark,’” he said.

Personally, I think the signs point to the video being a hoax that was concocted as part of one of two possible scenarios: Either it’s a prank carried off by some enterprising and tech-savvy students without the help of any adults at the school, or it’s a collaboration between the students and faculty meant to drum up interest in Fearpark. I don’t mean to rain on anyone’s parade; on the contrary! Indeed, I applaud the school — whether we’ve got its students to thank for this delightfully spooky littler diversion, its faculty, or both — for what looks like a well-executed way to promote their planned Halloween festivities.

If it does turn out to be a poltergeist, though, I’ll definitely eat my words.

More like this
On TikTok, Users Are Pranking Their Loved Ones With Minions Makeup
By Emma Carey
13 Selfie Instagram Caption Ideas That Exude Main Character Energy
By Jessica Booth and Emma Carey
TikTok Is In Its Elle Woods Era
By Meguire Hennes
RushTok 2022 Is Here & TikTok Is Just As Obsessed As Last Year
By Sarah Ellis
Get Even More From Bustle — Sign Up For The Newsletter