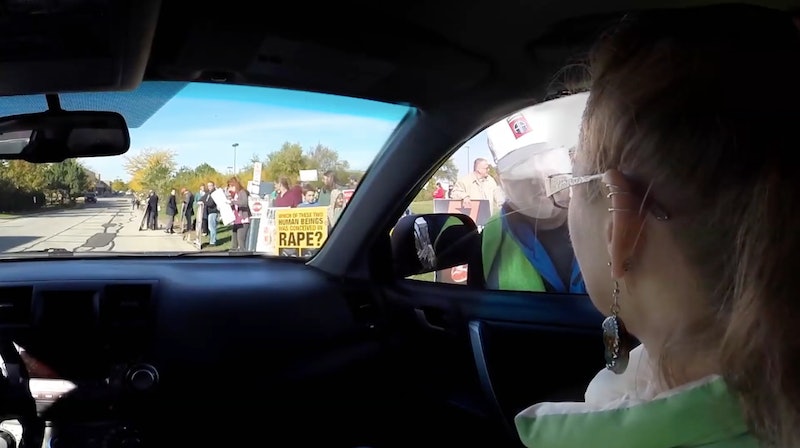 At abortion clinics across the country, women and their companions are faced with harassment — and sometimes even physical violence — as they try to access safe and legal abortions. Protesters range from Catholics silently doing the rosary to members of anti-choice groups and churches who scream, call names, and may even attempt to physically block clinic access. It’s a horrifying situation for people who are often already going through a really hard time, but it’s a situation that you can’t truly understand unless you’ve been in it yourself. Until now.

Across the Line is a new virtual reality experience that lets anyone experience just what it looks and feels like to walk through that throng of protesters. The film was created by Nonny de la Peña of Emblematic Group in cooperation with Brad Lichtenstein and Jeff Fitzsimmons of 371 Productions/Custom Reality Services and was executive produced by Planned Parenthood. The filmmakers took real audio from abortion clinic protests and combined it with scripted scenes and documentary footage with the goal of giving people a deeper understanding of exactly what happens at some clinics when a woman goes for an abortion.

"Nobody should have to face shame, judgment, harassment, or intimidation in order to get or provide health care."

"Across the Line puts the viewer in the shoes of someone who is trying to access a safe and legal abortion, offering a new and immersive experience that can help people better understand what thousands of women face when they seek health care," Molly Eagan, vice president of Planned Parenthood Experience tells Bustle. "When surveyed after seeing Across the Line, both providers and health center staff said the film accurately portrays the harassment they’ve experienced when accessing or providing care. Nobody should have to face shame, judgment, harassment, or intimidation in order to get or provide health care. Nearly a third of women in America decide to end a pregnancy, and a woman’s decision about her pregnancy should be respected and valued."

The experience is in three parts, starting with a woman in a clinic room with a doctor. The scene then fades back in time to the woman arriving to the clinic with a friend, where they can see protesters shouting and holding graphic signs. In the final scene, the viewer actually becomes the patient and has to navigate a group of computer-generated protestors “shouting highly offensive remarks aimed at shaming and stigmatizing her.” The audio is real audio captured at abortion clinics across the country and the filmmakers hope that this combination of fiction and documentary will help give people a deeper understanding .

And it looks like it might be working. A group called Sea Change Program spent January through April of last year conducting research to measure the impact of Across the Line. They surveyed 284 viewers and intended viewers of Across the Line about their views on abortion, clinic harassment, and clinic violence. Their study found that watching the film increased empathy for women who were getting abortions and decreased tolerance for clinic harassment.

When Planned Parenthood examined the effect of Across the Line specifically on people with moderate and conservative views on abortion in Kansas City and Atlanta, they also found that watching the film was associated with decreased tolerance for clinic harassment and increased empathy for women who were getting an abortion. More than 75 percent of viewers in this group supported legislation keeping protesters away from clinics and 66 percent were more likely to support political candidates who support safe and legal abortion. Those numbers are roughly in line with other studies on the issue, like a recent survey by The Hill that found 81 percent of people in general (not just those with moderate or conservative views) support laws protecting clinics and 69 percent support the right to choose overall.

“We have suspected for a long time that virtual reality is a powerful medium which can incite empathy at a deeper level and also potentially shift opposing attitudes,” says de la Peña. “This study breaks new ground by showing that this in fact does hold true in the real world. With so many women facing increased lack of access to health care, it is exciting to see that our VR piece can have an impact around this issue.

Roe v. Wade has been the law of the land since 1973, but over the past decade we’ve seen a dramatic uptick in laws restricting access to safe and legal abortion across the country. Since 2011, more than 300 state-level laws restricting abortion access have passed, which is more than 30 percent of all laws about abortion since 1973. Planned Parenthood reports that more than half of American women of reproductive age live in a state where abortion access is restricted by their state legislature. Abortion clinic escorts tell Bustle that they’ve also seen an increase in protesters, as well as a more aggressive approach in recent years. As virtual reality technology becomes more accessible, however, experiences like Across the Line will hopefully move to the front lines of the fight for the right to choose, showing people just how horrible it can be to face protesters.