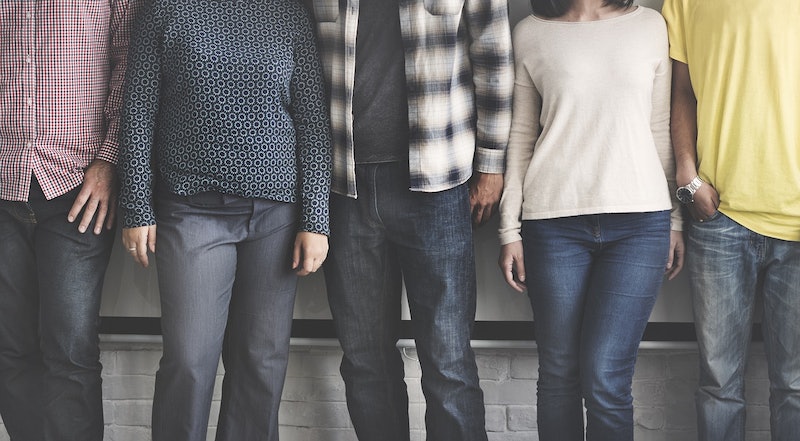 Earlier this month, New York's Colgate University went on lockdown for several hours due to a suspected gunman. The gunman? An male African-American student carrying a glue gun. Now, another student is explaining white privilege at the school with a sword. Let me explain.

After the whole ordeal (fortunately, the student was not hurt), students and staff came together to discuss matters, and many voiced the concern that the college overreacted to the situation because of the man's race. To further demonstrate this point, student Jenny Lundt shared a photo on Facebook of herself carrying a sword around campus. Her message? White privilege made it safe for her to do so, whereas a black man with a glue gun was a serious threat that affected the entire school.

"THIS is what white privilege looks like," she says in her Facebook post. "This is me, only one year ago on this very campus, running around the academic quad with a fucking sharp metal sword. People thought it was funny. People laughed- oh look at that harmless, ~ silly white girl ~ with a giant sword!! Today, a black man carrying a fucking glue gun shut down my ~prestigious liberal arts college~ for 4 hours."

Lundt points out that the limited amount of information authorities were working with at the time — likely that they were looking for a black man with a weapon — put all black men on that campus in serious danger. "That is the reality of the institutionalized racism in the United States ... This is engrained in our university and our larger society. White Colgate students, we need to do better."

Lundt was never stopped or called into question for carrying a legitimate weapon around school, and she still has it in her possession to this day — something else she says her white privilege is responsible for: "If you think for even a second this wasn't profiling, ask yourself why this sword is still in my room and has not ONCE made anyone uncomfortable. No one has EVER called the police on me."

Lundt's post went viral (that still might be an understatement), flooding with comments and opening up a very sensitive conversation that we've had a difficult time discussing without feelings getting hurt. The student is so determined to have a positive impact that she's openly welcomed even criticism of her approach, which is sort of what happened when someone by the name of Sahil Gadhavi penned an open letter in response to her message.

Gadhavi explained that Lundt's calling out white privilege, and receiving so much support, further demonstrates her white privilege — because if she had been a person of color, the response might not have been so great: "I only write this to make people realize that even in doing so she is exposing more white privilege by the stark difference in how much positive response from white people she is getting and how negative it would’ve been had she been a black person trying to talk about white privilege," writes Gadhavi.

With so much focus on her, Lundt took the opportunity to remind everyone in a follow-up Facebook post that this isn't about her — not by a long shot: "I just want to remind everyone viewing/sharing my posts that this narrative is not about me and my feelings. This story, and the event that happened last week, is about people of color that are oppressed each and every day by this institution and this country at large and I in no way meant to take the conversation away from them and their stories ... My privilege allowed me to share my story. My privilege and my influential friends and thus their influential friends made this post go 'viral'. All of that is privilege at work."

It's an honest look at the racism that it still so heavily embedded in our culture today — a culture where a man with a glue gun, who was just working on an art project, can't walk across campus without fear of having the cops called on him. Would it have been different if we changed the color of his skin? We can't all relate to this feeling of oppression, but that doesn't mean we aren't responsible for trying to fix it. Lundt's message is a step in that direction.