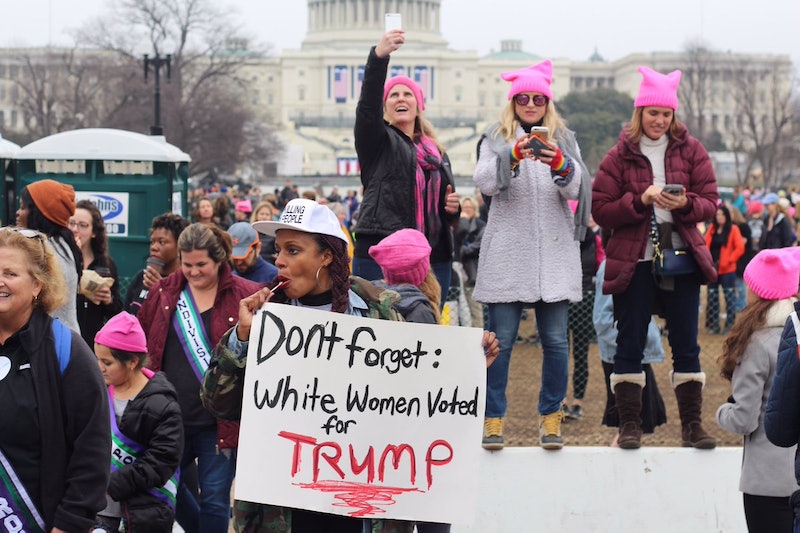 One year after the inauguration of Donald Trump, the second annual Women’s March will take place this weekend in Las Vegas, Nevada. Like last year, hundreds of thousands of women are expected to participate in the national event and at sister city marches across the country. This year’s Women’s March theme focuses on voter registration in preparation for the 2018 midterm elections and the 2020 presidential election. In addition to being the kickoff for a national voter registration drive, the Women’s March has cemented itself in American history as a protest against the patriarchy. Often when we discuss protesting, the conversation tends to skew toward who “shows up” to the protest and who doesn’t — but showing up is more than wearing a pink "pussy" hat and toting a clever sign. To really be an active participant in the resistance, one must show up beyond Women's March 2018 — and remember the Black women who have consistently been doing so.

Last year's Women’s March was a historical event and is considered the largest one-day demonstration in U.S. history, so I’m not suggesting that participating in it was innately frivolous. But, it is not lost on me that many of the same white women who patted themselves on the back for attending the first Women’s March were complicit in Donald Trump's rise to power by remaining silent as he campaigned on a platform of xenophobia. Of course, there are white women who have been showing up and putting in the work since long before Donald Trump was even on the campaign trail. But if the election of Donald Trump was the first time you woke up to America's systemic racism, you haven't been paying attention. And as you continue to unlearn unconscious white feminism, it's important to remember, listen to, and learn from the people who laid the groundwork for you.

One of the tenets of white feminism is not including the specific experiences of women of color in your understanding of how sexism affects people differently. After producer Harvey Weinstein was accused of sexual assault by dozens of women, sparking the #MeToo movement, many (previously silent) women began campaigning for a more nuanced discussion of how rape culture impacts women. Rose McGowan, one of the most visible faces of the movement (and speaker at the Women's Convention), was criticized for suggesting replacing the word "women" with a racial slur, which many people thought implied McGowan's privileging of white women. This lack of nuance was the case as far back as first-wave feminism. Susan B. Anthony, one of the most famous white feminists, once said, “I will cut off this right arm of mine before I will ever work or demand the ballot" for Black people and not for women.

White feminists — which does not necessarily mean feminists who are white — have always had a problem with intersectionality. The only difference now is that it can be easily documented on Instagram and Twitter. But Black women show up when it’s not convenient or Instagrammable, and we do so consistently. In Alabama, Black women overwhelmingly voted for Democrat Doug Jones (98 percent), tipping the election in his favor, while the majority of white women (63 percent) voted for Roy Moore, who was accused of sexual misconduct with a minor. Black women were roundly "thanked" across social media for "saving" liberals who couldn't vote in Alabama, but that isn't the same as payment for continuing to show up again and again.

Following the destruction of Hurricane Harvey, Dr. Roni Dean-Burren, a Houston native, coordinated a way for folks to donate directly to Black women who were affected by the storm. As of Sept. 1, 2017, #SupportBlackWomenHOU had raised over $30,000 in direct donations. On her website, Dr. Dean-Burren states, “Being about this work — dismantling oppressive systems, challenging places of privilege and caring for the least of these — means being about people." Showing up means doing the necessary work to help those who are often ignored in their time of need. It’s been time to respect the fact that Black women have been showing up in every worthwhile instance — regardless of how much attention their actions will receive.

There are more ways to uplift women than attending a march or protest, and I’d argue that while the Women’s March is important, participating in it is a low bar. The real work comes from what you do during your daily life. Do you challenge microagressions and racist policies at your workplace? Do you correct family members who dismiss the legitimate grievances of people of color, or do you remain silent to keep the peace? When a queer person calls you out for perpetuating homophobic or transphobic ideas, are you quick to defend yourself? Or are you more concerned about listening, understanding, and changing your behavior?

The revolution isn’t going to be pretty. Folks in power don’t willingly give up their power without a fight. Black women have taken the lead in organizing and direct action initiatives, but it’s time for white feminists to step up and do substantive work that goes beyond one day.