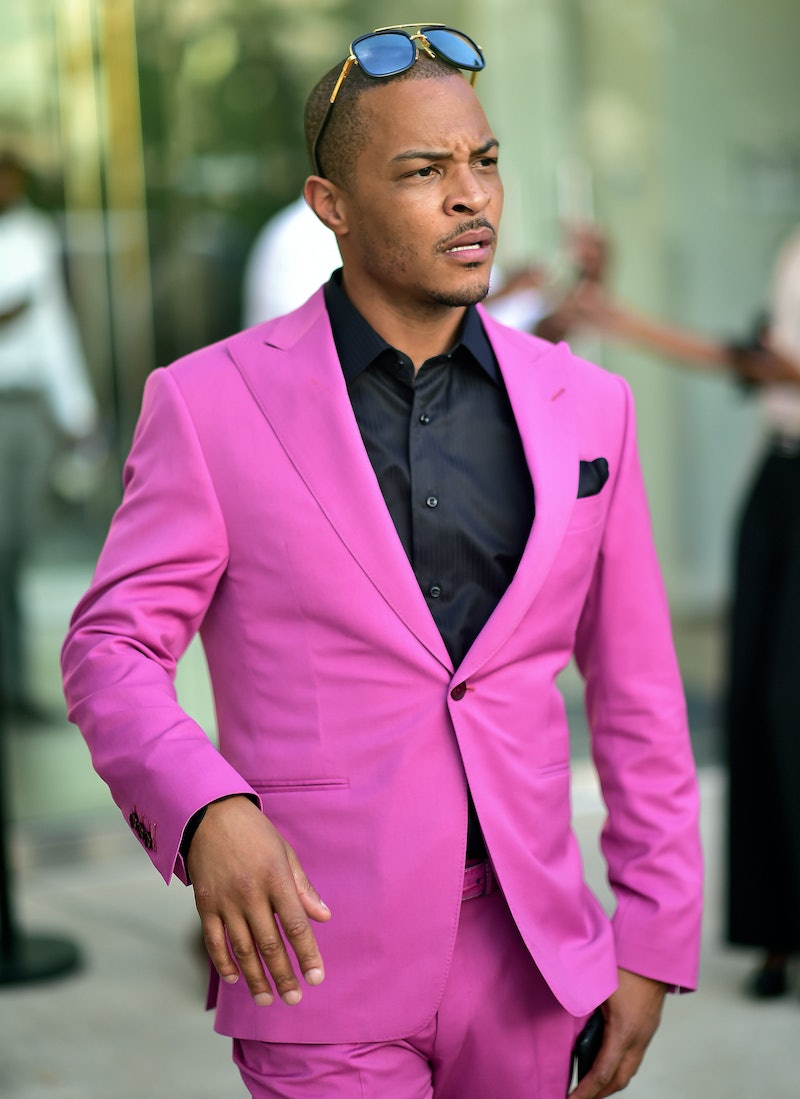 Earlier this month, rapper T.I. faced backlash after appearing on the Ladies Like Us podcast and revealing that he requests his teenage daughter's gynecologist "check her hymen" during yearly visits. Now, T.I. has justified checking his daughter's hymen during an appearance with his wife, Tiny, on Jada Pinkett Smith's Facebook Watch series Red Table Talk. While the rapper began the segment by apologizing to 18-year-old Deyjah Harris for sharing such intimate details about her publicly, he also continued to defend his actions by suggesting that through "protecting" her virginity, he's protecting her.

Throughout the interview, T.I. compared young women and young men, often suggesting that young men aren't capable of connecting emotionally as teenagers, but are acting on "primal" urges when they have sex. "I'm talking about all the slimy, grimy, chubby-fingered little boys, who want to defile and destroy the sanctity..." he said. "The thing that's the most important in my life... I'm going to deal with that with extreme care."

He also suggested that the repercussions of a young woman becoming pregnant are immediate, and that losing her virginity meant she was now an adult in need of a life plan. When Pinkett Smith pressed him on the patriarchal double standards of how society looks at a boy's virginity versus a girl's, T.I. said, "If my son goes out and gets a girl pregnant, how is a household changed for those nine months? Whereas if my daughter comes home, my household changes immediately."

T.I.'s attempts to justify the practice of checking a young woman's hymen only perpetuate the myth that a "virginity test" is possible. The idea of tying a woman's worth to her virginity isn't just sexist, it's also harmful. Caitlyn Caruso, manager of state and local campaigns at Advocates for Youth, recently told Bustle, "If we're discussing T.I.’s behavior right now by claiming he’s a protective father, we're inherently defending other behavior that's along the same strands."

She added, "We see abusive fathers who often want to protect their daughters from men like them — that's a very common notion. It's seen as this protective father trope, but it's actually just creating abusive environments where young people don’t feel free and supported in all of their ventures."

By projecting his fears onto Deyjah under the guise of protectiveness, T.I. is — knowingly or not — controlling his daughter's autonomy. In his original interview, T.I. discussed visiting the gynecologist with his daughter, and having her sign a waiver so that information about her hymen could be shared with him. "Just check the hymen, please, and give me back my results expeditiously," T.I. said during his appearance on Ladies Like Us. "I will say, as of her 18th birthday, her hymen is still intact," he continued.

The rapper backtracked in his discussion with Pinkett Smith, and clarified that he "began to embellish and exaggerate" during his podcast appearance. On Red Table Talk, he said that he was never in the exam room with Deyjah, and he also claimed that these check ups aren't being done in the present day, now that his daughter is 18. Additionally, he stated that he only agreed to the interview after receiving Deyjah's permission.

By the end of his talk with Pinkett Smith, T.I. seemed to acknowledge that he doesn't fully understand the impact of his actions, or why what he views as a protective action is actually harmful. However, the Red Table Talk host insisted that his situation was a teachable moment. "There's a patriarchal structure — it's structured by the views and outlook of men. It tends to be, at times, oppressive to the feminine journey," Pinkett Smith said. "There's a lot that happens in the feminine journey. It's often told and seen and led through the eyes of men, who know nothing of what we're going through."

Now it's time for fathers like T.I. to start listening to their daughters and the women around them, instead of making unilateral decisions they believe will protect them.