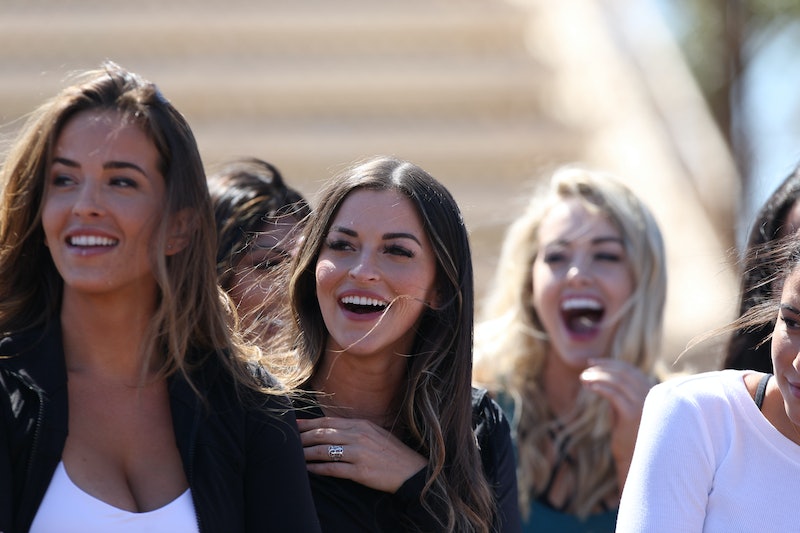 The grand tradition of hometown dates on The Bachelor means a few things. The first is that the Bachelor, in this case, Arie, will be very nervous. The second is that basically all of the contestants will tell the Bachelor, “I love you” or “I’m falling for you” if they haven’t already. And the third and perhaps most important (and most entertaining) factor of hometown weeks is that at least one family will hate — and I mean hate — the Bachelor. Like when Tia’s brother called Arie a “playboy” on The Bachelor, and Arie didn’t really know what to say.

Tia Booth made it this far on The Bachelor, and that means that she gets to take Arie home to meet her family. The family, well, they’re happy to see their daughter and sister walk through the door, but not necessarily the salt-and-pepper-haired stranger behind her. And who could blame them? This guy is statistically going to break Tia’s heart, so why even bother getting to know him? There’s a 75 percent chance that Tia gets left in the dust at the end of this thing, and Jason, Tia’s brother, knows that. That’s why, as soon as he gets a few minutes alone with Arie, he immediately asks Arie about his “reputation” and the fact that he’s called “the kissing bandit.” You could hear Arie’s gulp from 3000 miles away.

It’s Jason’s job to be defensive of his sister, and now, it’s was up to Arie to respond to the “playboy” rumors. Now, Jason never really explained what rumors he had heard about Arie — just that Arie allegedly got around — but Arie basically explained it away saying that he'd had some good years filled with travel and fun times but now he could see himself spending the rest of his life with Tia. And you know what? Jason folded like a cheap suit. All Arie had to say was something like, “I may love your sister” and Jason was sold. Come on, man! Where’s your sense of duty to your sister for this long, strange ride she’s been on with Arie? It’s perfectly acceptable to ask Arie about his alleged reputation if you think he’s going to marry your sister after knowing her for only three weeks. Heck, Tia’s dad called Arie a “playboy,” too. Clearly these rumors were an issue for them.

But Jason’s line of questioning may get Tia in trouble. Using that word, “playboy” — that’s not something that you want to do on The Bachelor. Dropping a p-bomb, as it were, can get you eliminated. Just ask Desiree Hartsock — on Sean Lowe’s season of The Bachelor, Des’ brother got into it with Sean calling him a player, and Des was eliminated in the same episode. Can’t be a coincidence that Des’ brother made the Bachelor, bastion of love and romance, seem like a player, and then she was kicked off the show. Tia is fabulous and a hoot and her family toasts with cocktail wieners (because she is from Weiner, Arkansas), so here’s hoping that her family’s doubts don’t signal the end of her road with Arie.

In fact, many happy Bachelor and Bachelorette couples have to go through this sort of drama to reach the end of the line. Remember Rachel’s season of The Bachelorette, when Rachel introduced her whole family to Bryan (her eventual winner) and they hated him? JoJo’s parents and brothers were not fans of Ben Higgins (that was the most awkward hometown ever), and JoJo still got an “I love you” out of the deal. Ultimately, it’s Arie’s decision on whom to keep around on The Bachelor, but I hope that a heavy ribbing by Tia’s family doesn’t take her out of the running for happily ever after.