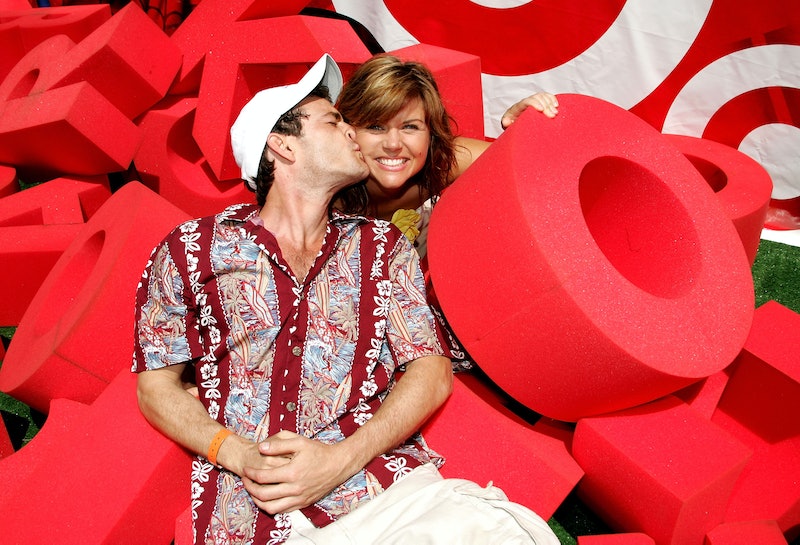 Here is yet another heartbreaking tribute for Luke Perry. On Thursday, March 7, Tiffani Thiessen honored Luke Perry on Instagram by recalling their past working relationship on the set of Beverly Hills, 90210. Thiessen first joined the former drama series in 1994 as Valerie Malone, a master manipulator who once tried to romantically pursue and seduce Perry's Dylan McKay. This is the first time Thiessen's publicly spoken about Perry since his death was confirmed on March 4.

Next to a black-and-white photo of Perry and the former Saved by the Bell star, Thiessen emotionally shared,

"My heart has been weighing heavy. The loss of a man who started as my co-star but quickly became my friend. He welcomed me on my very first day of #90210 with open arms. A day that was not an easy one for me. I was coming in to a show, a family really, that had been together for over 4 years. But this man took me under his wing and made me feel at home. Made me feel like I belonged in his TV family. He was sincere, sweet, warm, kind, professional and funny as all heck. And most of all, the definition of a gentleman."

For the Pull Up a Chair author, there is now a "hole" in the world without Perry here in the flesh. That said, Thiessen wrote, "But heaven definitely gained you as an angel. #RIP #LukePerry #gonetoosoon."

Thiessen's post follows many other tributes from Perry's 90210 costars. Most recently, Jason Priestly remembered Perry with a heartbreaking photo and message posted on Instagram on Thursday. For Priestly, it understandably took him some time to create a tribute for Perry, a man who was his friend for almost 30 years.

Next to an image of the two from somewhat recently and another of them back in the '90s, Priestly wrote,

"It’s taken me a couple of days to figure out how to write this... My dear friend of 29 years, Luke Perry, was one of those truly special people who really cared... Luke was not only a star, he was an incredibly bright light that was extinguished far too soon... and that is why I, and so many others, are in so much pain today..."

Priestly ended his post by focusing on what made Perry truly special — his bright light. "If you had the good fortune to know Luke, or to have ever crossed his path, I know you are sad today as well... the candle that burns twice as bright only burns for half as long... you burned oh, so brightly Luke... Goodnight Sweet Prince," he concluded.

Perry's rep previously confirmed to Bustle that the actor had passed away at the age of 52 after suffering a stroke by releasing a statement which read:

The amount of statements and social media posts that continue to be shared in honor of Perry reflects how much he truly impacted the lives of those closest to him. He definitely made everyone feel like family.