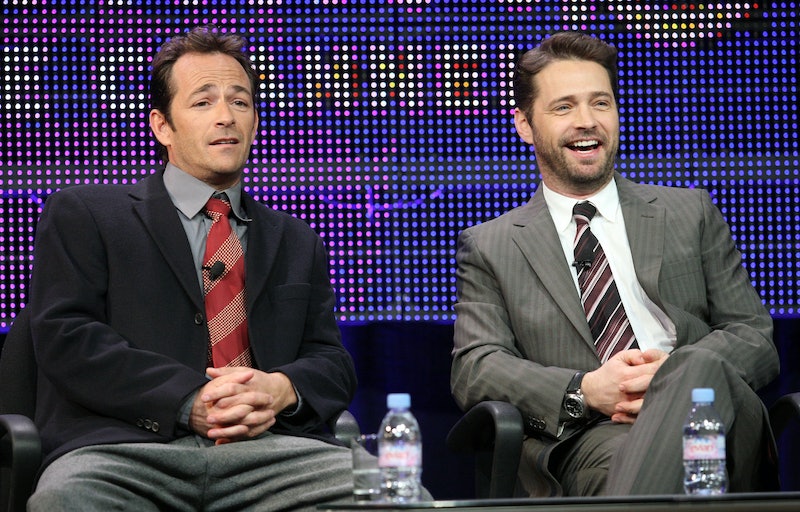 The Beverly Hills, 90210 cast continues to post tributes for their dear friend they lost only a few days ago on March 4. Jason Priestly recently honored Luke Perry on Instagram with a touching post. Priestly and Perry formed a close friendship when they scored respective roles as Brandon Walsh and Dylan McKay in the '90s teen drama. And their bond is one that continued to the day Perry died unexpectedly at the age of 52 after suffering a stroke, as Priestly made clear in his Thursday tribute for the late Riverdale actor.

Not only did Priestly share a recent photo with Perry, but he also posted it right next to a black and white image from their 90210 days. As for the more current picture, it's clear how much they truly cared about each other and never let their friendship fade. Understandably, Perry's death hit Priestly hard. He wrote,

"It’s taken me a couple of days to figure out how to write this... My dear friend of 29 years, Luke Perry, was one of those truly special people who really cared... Luke was not only a star, he was an incredibly bright light that was extinguished far too soon... and that is why I, and so many others, are in so much pain today..."

"If you had the good fortune to know Luke, or to have ever crossed his path, I know you are sad today as well... the candle that burns twice as bright only burns for half as long... you burned oh, so brightly Luke... Goodnight Sweet Prince."

Like Priestly, many other 90210 cast members have paid tribute to the late actor. On March 5, Shannen Doherty honored Perry with a series of photos on Instagram and also wrote, "Yesterday morning I got a phone call that devastated me. I’m struggling with this loss and am having a hard time with my thoughts." She continued, "But, my heart goes out to his family and friends who were blessed by his light in their (and mine) lives. Processing this is impossible right now."

In addition to Priestly and Doherty, Ian Ziering shared several Instagram posts. Next to a happy and silly picture of the two, Ziering wrote on March 4, "Dearest Luke, I will forever bask in the loving memories we've shared over the last thirty years. May your journey forward be enriched by the magnificent souls who have passed before you, just like you have done here for those you leave behind. God please give him a seat close to to you, he deserves it."

His other costars, Tori Spelling and Jennie Garth also released statements to People expressing their sadness over Perry's untimely death. Spelling told the magazine, "I’m in utter shock and heartbroken. I'm saddened for his kids whom he adored beyond words. He was so proud of Jack and Sophie." As for Garth, she said, "My heart is broken. He meant so much to so many. Such a very special person. I share my deep sadness with his family and all who loved him. Such a terrible loss."

Perry's rep previously confirmed to Bustle that the actor had passed away and released a statement which read:

There's no denying Perry's death is greatly impacting those nearest and dearest to him. His bright light will never be forgotten and will continue to light the way for those who loved him most.