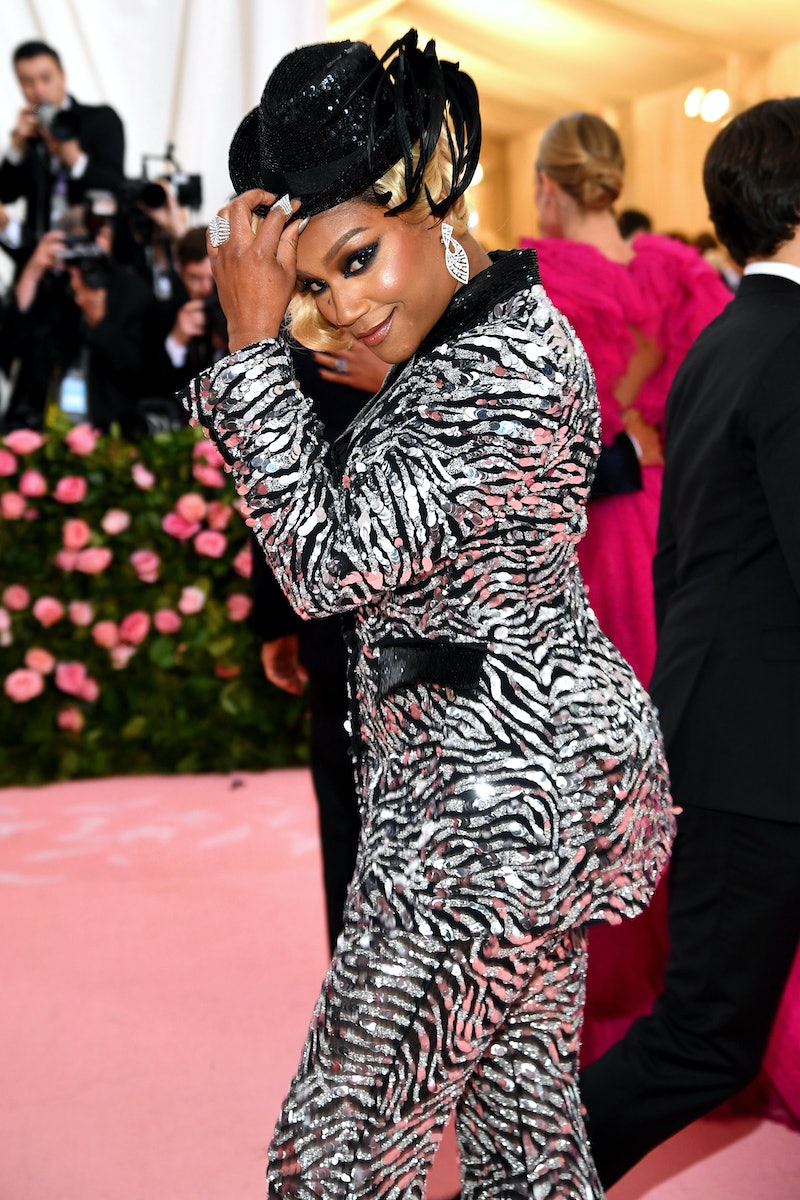 The first Monday in May could be just another day to some, but to celebrities, fashion designers, and style enthusiasts, the date is the day of the annual Met Gala. The celebrity-filled occasion is when stars' styles are on full display, and Tiffany Haddish's 2019 Met Gala outfit is no exception.

Haddish, the star of TBS' The Last OG, attended the gala for the first time in 2018, and she's back on fashion's biggest red carpet for the 2019 event. This year's theme, "Camp: Notes on Fashion," provides celebrities and designers with ample opportunity to go beyond the traditional glamour of an award show red carpet and into the realm of the extreme, the outrageous, and the fun. Camp is larger than life, and Haddish's look was zebra print and sequin and definitely camp.

For the 2019 Met Gala, Haddish wore a suit designed by Michael Kors, and it featured not just sequins but a a full-on zebra stripe print. Haddish didn't just stun in her wide leg zebra print trousers and blazer, though. She also switched up her hair with a stunning blonde bob and joined in on a hair change theme with other stars like Mindy Kaling and Kris Jenner going blonde as well. She finished the hair look with a sequin, feather top hat that was definitely on theme.

While Haddish's perfectly glittering look was a show-stopper, there was something a little extra in her bag that'll make fans love her even more than they already do.

In interviews on the red carpet, Haddish revealed that there's just not enough food at the Met Gala, and she brought her own fried chicken. While yes, the moment is hilarious, twitter user Shelby Ivey Christie noted the way that the unusual accessory can actually be a meaningful part of her look.

Christie, who previously worked with Vogue magazine and is an MA candidate in Costume Studies at New York University according to her Twitter explains in a tweet, "Tiffany Haddish brought fried chicken in her purse. Again, Camp has an element of “spoof” or “trolling” - Making fun of cultural + societal moments. Love that she’s trolling to this friend stereotype of blackness while dressed as a pimp #MetGala."

As for whether or not Haddish was nervous walking her second Met Gala red carpet? The answer certainly appears no. During her first carpet, she totally crushed it, and even admitted that she wasn't nervous at all. According to People, last year when she walked the red carpet at the gala, she was asked about nerves and responded saying, "I feel like ‘She ready.'"

In fact, Haddish seemed more than ready wearing a gorgeous Brandon Maxwell design. In an Instagram video posted prior to the 2018 event, she said, "Bout to represent for comedy, for women, for all of us." Now, she's doing it again on the 2019 Met Gala red carpet.

Haddish was joined on the Met Gala red carpet by a plethora of other actors including Lady Gaga and Priyanka Chopra who both make up this year's hosting committee. Until tonight, however, Vogue's Anna Wintour had kept the full lists of guests secret. Of course, there were always obvious attendees like hosts Harry Styles, Lady Gaga, and Serena Williams.

Now, comedy fans can add Tiffany Haddish to the list of attendees representing for women in comedy, and she looks incredible. With her zebra print pantsuit by Michael Kors and snacks in her bad, Haddish is definitely one of the stand outs on the 2019 Met Gala red carpet.