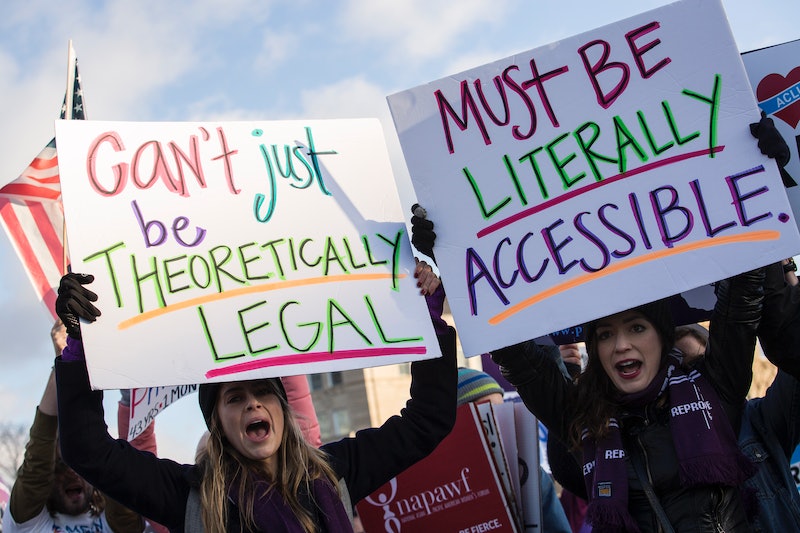 The Kansas State Senate spent the bulk of their Tuesday arguing the merits of different font sizes (no, really) while discussing the future of a so-called "informed consent" bill that would require abortion providers to disclose additional information about themselves before being allowed to perform an abortion. The bill text specifies that print this information out in "black ink with 12-point times new roman font." Of course.

Along with Kansas's myriad of other requirements (calling for doctors to describe the procedure, the gestational age of the fetus and mandated offers to view an ultrasound of the fetus), this particular bill, SB 98, would require abortion providers to provide individuals seeking abortions with a document (in the aforementioned font size and color) "at least 24 hours before" their procedure that contains information about the doctor's personal and employment history.

This required information includes whether they live in the state or not, whether they have clinical privileges at a hospital nearby, when they graduated from medical school, when they started working at a clinic, if they've ever had any disciplinary action and if they have malpractice insurance. While these aren't necessarily bad things to know about your doctor, the motives behind this bill have abortion advocates concerned because it's yet another targeted measure that (despite offering little medical benefit to patients) codifies into law that abortion providers aren't worthy of their patients' trust.

As the Wichita Eagle reported, the bill's authors and supporters insist that these requirements "aren't an undue burden" on providers — but also stress their interest in pushing what they call "pro-life" legislation.

Meanwhile, abortion advocates and doctors themselves argue that requiring doctors to provide printouts of information that is easily accessible through the Kansas Board of Healing Arts is insulting and undermines the relationships of doctors and their patients

“You’re demanding a burden that sets the stage for distrust within the patient-physician relationship of only one small subset of physicians and patients,” Carol Joy Darrah, a licensed physician told the Wichita Eagle. “It is clear that this legislation is prejudicial, singling them out in a way that is unnecessary and has no medical basis.”

Abortion providers are frequently targeted by the anti-abortion movement on a personal and legislative level. Whether it's through sidewalk bullying outside of clinics where they shout "baby killer" or depicting them in anti-choice media as trying to make a profit off of what they call "the abortion industry," anti-choice lobbyists frequently seek to demonize and discredit doctors who perform abortions. Through crafting legislation like SB 98, they're teaming up with politicians to create a legal standard that scrutinizes abortion providers more than their colleagues and further supports the myth that abortions aren't as safe as any other common medical procedure.

The font thing? It's just the petty tip of a more insidious iceberg. While this is arguably more mild than the more well-known Targeted Regulation of Abortion Providers (TRAP) laws that closed countless clinics prior to Whole Woman's Health v. Hellerstedt ruling, bills like SB 98 (along with other so-called "informed consent" legislation) attempt to claim that introducing state-mandated, medically unnecessary steps for individuals seeking abortions somehow benefit patients.

Meanwhile, the bills contribute to a recent trend among anti-choice legislators to create a culture that treats these doctors — despite their commitment to helping women and uterus-owning individuals maintain control over their own bodies — like criminals.