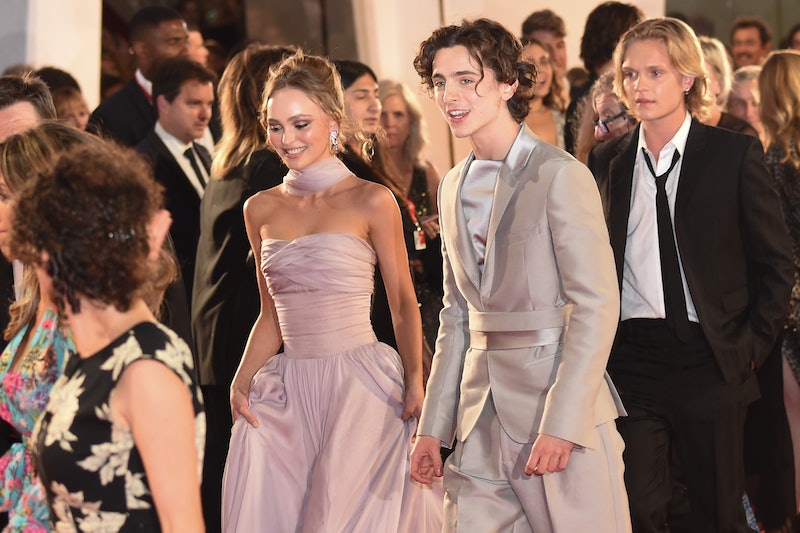 The Internet's Boyfriend is back on the market once more. According to Us Magazine, Oscar nominee Timothée Chalamet and Lily-Rose Depp have reportedly broken up after about a year and a half of dating. While both actors haven't spoken about their relationship publicly, Chalamet is featured in the May 2020 issue of British Vogue alongside his 4000 Miles costar Eileen Atkins, and in the article, the outlet noted that he is currently single.

Reports that Chalamet and Depp had begun dating first surfaced in October 2018, when E! News reported that the two young actors — who met while filming the 2019 Netflix film The King in France — had been spotted spending time together and enjoying a coffee date in New York City. Around the same time, Us reported that as they were walking down the streets, Chalamet was spotted pulling Depp in for a kiss. "They were walking down the street and he stopped her and pulled her close," a source told the outlet. "They started making out for a while, for over a minute."

The couple appeared to "confirm" their relationship a month later, when E! reported that Chalamet and Depp had been photographed kissing during another date in New York; a month later, they were snapped holding hands in Paris. While they kept their relationship under wraps for quite some time afterwards, in September 2019, they were photographed kissing on a boat while on a trip to Capri, Italy, and the pictures quickly became a meme.

During their romance, Chalamet proved adept at sidestepping questions about Depp, although he did seem to agree that "Lily makes [him] speechless," during an interview with Access Hollywood at the 2019 Golden Globes. In October of that same year, he told USA Today that he enjoyed working with his rumored girlfriend on The King. "It was awesome and what great scenes [we shared]," he said, describing her character of Catherine of Valois as "fearless" and "righteous."

Though she wasn't particularly forthcoming with any comments about their romance either, Depp did praise Chalamet during The King press tour as an actor and a scene partner. "Timothée brings an emotional vulnerability to everything he does, almost without even trying. That's his gift," Depp told Vogue Australia in Oct. 2019 about her onscreen partner. "He's so immensely talented, and I feel like nobody could have taken on the role like he did."

Of course, now that he's single once more, Chalamet won't have trouble finding a new partner to fall in love with, thanks to his status as an Internet heartthrob. Jennifer Lawrence even joked about her crush on the actor during a February 2018 interview with Entertainment Tonight. "Timothée, I’m waiting for him to get a little bit older, you know?" she said, after telling the outlet that Chalamet is "so hot" in her opinion. "[I’m] buttering him up like a pig for slaughter, and then I’m going to swing right in there as soon as he’s, like, 30."

And he has plenty of non-famous admirers as well: after he was spotted handing out bagels to fans who ran into him in New York City, Chalamet joked to USA Today that he was often followed by fans. "I was just saying to my mom the other day that I need to scope out some new bagel places," Chalamet says. "Thankfully, New York is the best city in the world for that – it's not like looking for bagels in Paris." Chalamet and Depp may no longer be young Hollywood's royal couple, but it's clear that he's still the king of pretty much everyone's hearts.

More like this
Robert Pattinson & Suki Waterhouse Made Their Red Carpet Debut — 4 Years Later
By Jake Viswanath
Keke Palmer Paid Tribute To "Other Half" Darius Daulton After Announcing Pregnancy
By Jake Viswanath
Jodie Turner-Smith & Joshua Jackson's Relationship Timeline Includes Her Proposing
By Jake Viswanath
J.Lo Wants To Make A Sequel To This Movie With Ben Affleck
By Jake Viswanath
Get Even More From Bustle — Sign Up For The Newsletter