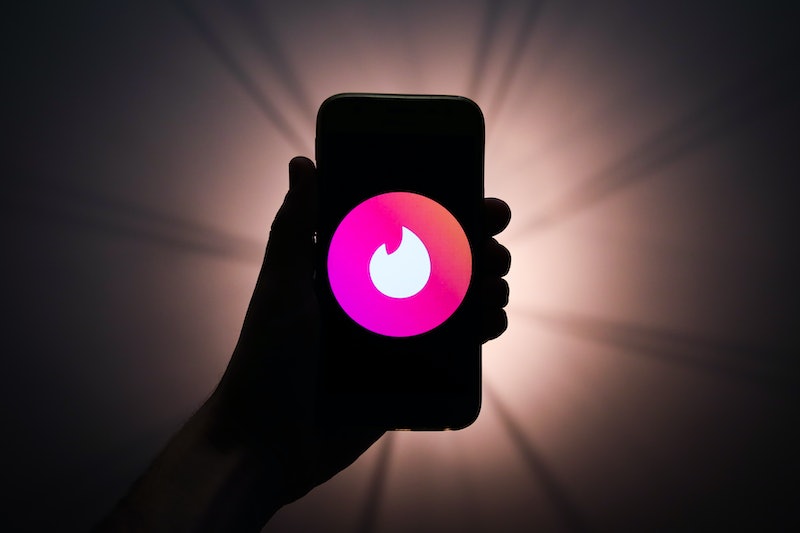 In a continued effort to prioritize users' safety, Tinder is adding a “panic button” to its dating app. According to a Jan. 23 press release, the feature comes in partnership with an app called Noonlight, a safety platform that tracks users’ locations and contacts police services in cases of emergency. And it's not the only new tool rolling out to users in the coming days. Soon, the app will also include photo verification, which allows users to self-authenticate their identity using real-time photos, and a “Does This Bother You?” prompt as a means to detect potentially offensive messages.

Here’s how the "panic button" tool works: starting Jan. 28, users who elect to use the Noonlight safety feature will be able to input information about their dates. This includes when they’re going, where they’re going, and who they’re going with. The app shares users’ locations with Noonlight, tracking them in real-time. If a user triggers the Tinder panic button, it will alert a Noonlight dispatcher who will then notify local police or other authorities.

It’s free to opt-in to the new safety features and an emailed press release specifies that Match Group, Tinder's parent company, will be rolling out similar features on other dating apps it owns — like Hinge, Match, OkCupid, and Plenty of Fish — in the next few months.

If a user opts in to the feature, they’ll have the additional option to add a badge to their Tinder profile to show they’re protected by this “silent bodyguard.” Match Group is hoping this badge will work as a deterrent. “Noonlight acts as a silent bodyguard in situations when you're alone or meeting someone for the first time,” Brittany LeComte, Co-founder and CCO, Noonlight, said in the press release. “Now, through our integration with Tinder, it can serve as a quick backup for daters, helping to deter bad behavior and helping members meet matches with more confidence. It’s a first-of-its-kind added security measure to help protect Tinder members even when they’ve taken their interactions off the app into real life.”

Understandably, this brings up the inevitable issue of privacy. Tinder specifies in its press release that Noonlight will not be sharing location data with Match Group. Additionally, any sensitive information will not be used for other purposes like marketing.

Tinder isn’t the only app adding features to help protect people on dates. In September 2019, Uber added RideCheck, a safety feature which tracks users’ routes, working to detect if something is amiss during your ride. The feature uses your phone’s GPS and sensors like the accelerometer and gyroscope to keep tabs on you and the vehicle you're traveling in in case of emergencies. For example, if RideCheck notices you've stopped in the same location for an extended period, it will send an alert to the user checking in, giving options to call emergency services in cases of a crash or other threatening situation. The same month, Lyft added similar safety features including one that will call 911 for you through the app.

Your iPhone also has built-in safety features including a discrete way to call 911. If you rapidly click the sleep/wake button on the right side of your phone five times in a row, it will help you quickly call emergency services. Features like this and Tinder's new "panic button" make it easy to prioritize your safety so you can swipe right with a little more peace of mind.