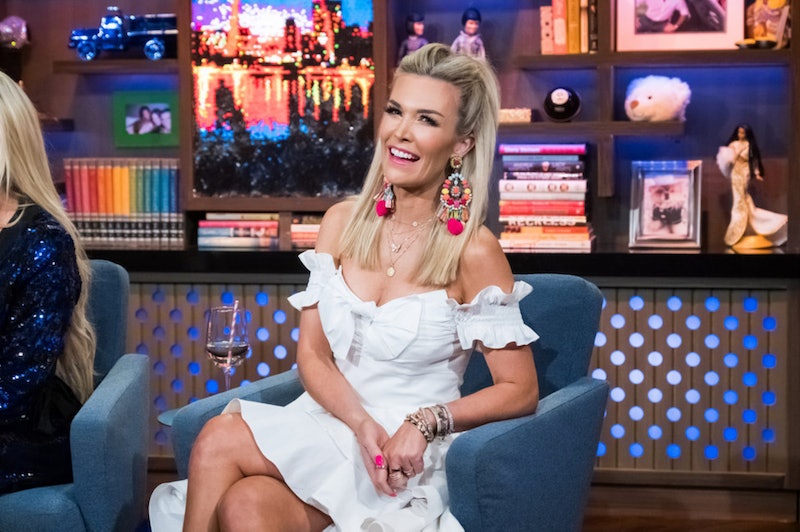 In a turn of events that will not surprise Real Housewives of New York City fans, Tinsley Mortimer seems to be back with Scott Kluth, her on-again, off-again boyfriend of over two years. On Monday, Oct. 21, Tinsley posted a photo on Instagram and not only credited Scott with taking the picture, but tacked a heart emoji to the end of his name in the caption. Tinz did not flat-out say she and Scott have rekindled their relationship in the IG caption, but their reunion in Chicago and that heart emoji suggest something's up. After the post went up on social media, E! News shared that a source said Tinz and Scott are back together. (Bustle reached out to Tinsley's rep for comment on the report, but did not receive an immediate response.)

A few days before Tinsley posted the snapshot taken by Scott, Us Weekly reported an insider said the RHONY star told her cast mates that she is dating the CouponCabin founder and CEO again. Per the outlet’s source, Tinsley shared the news about her and Scott at a RHONY tea party on Wednesday, Oct. 16. Us Weekly’s insider went on to say the pair “are fully back together.”

Tinsley and Scott were introduced by former RHONY star Carole Radziwill in February 2017. The two hit it off right away, went on a first date that ended up lasting five days, and decided to give a long-distance relationship a try: Scott is based in Chicago, and Tinsley resides in New York City. In Oct. 2017, Page Six reported Tinz and Scott had broken things off. A source told the tabloid that "long-distance relationships are never easy" but Tinsley had not "closed the door to a possible reconciliation in the future." They have gotten back together and broken up several times since.

As recently as RHONY Season 11, Tinsley and Scott's relationship status was a topic of conversation. They started the season together, but several episodes in, Tinsley revealed to her costars that she and Scott decided to split up. However, they did not sever ties completely. After Tinsley's dog Bambi died, Scott sent her his condolences along with a pair of shoes. This move raised some of of her costars' eyebrows; Dorinda Medley and Sonja Morgan wondered if Tinsley and Scott's relationship was actually over, or if there was still something going on between them behind the scenes. When Tinsley appeared on Watch What Happens Live with Andy Cohen in May, she confirmed that she really was no longer with Scott.

When it comes to Tinz and Scott, never say never. It sounds like their latest reconciliation could be featured on RHONY. Bravo has not officially announced the show's renewal, but Season 12 reportedly began filming in September. And as the aforementioned Us Weekly source shared, Tinsley apparently took a moment at a RHONY event last week to spill the relationship update beans. Season 12 presumably will not premiere until 2020, so fans will have to wait a little while to see how the latest chapter in the Tinsley and Scott's story unfolds.

More like this
'RHOP' Stars Robyn & Juan Reportedly Got Remarried & Filmed The Ceremony
By Brad Witter
Andy Cohen Apologized To Larsa Pippen After A 'RHOM' Season 5 Reunion Dust-Up
By Brad Witter
'RHOSLC' Star Jen Shah Refuses To Do A Post-Sentencing Interview With Andy Cohen
By Brad Witter and Jake Viswanath
Lenny Hochstein's “Boob God” Reputation Bolsters His Multimillion-Dollar Net Worth
By Brad Witter
Get Even More From Bustle — Sign Up For The Newsletter
From hair trends to relationship advice, our daily newsletter has everything you need to sound like a person who’s on TikTok, even if you aren’t.