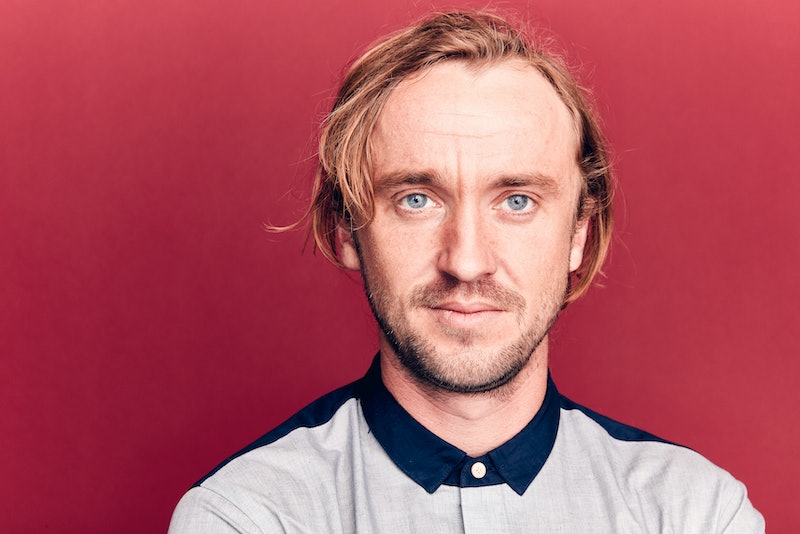 Everyone on social media might be freaking out about Netflix's wildest documentary, Tiger King, but one Harry Potter star knew all about Joe Exotic before he became an online phenomenon. During a mini-reunion with his onscreen father, Jason Isaacs, Tom Felton revealed he once met Tiger King Joe Exotic — whose real name is Joseph Maldonado-Passage — while filming the movie Braking for Whales.

Isaacs shared a video of the mini reunion on his social media account in order to promote the British Red Cross campaign to encourage people to stay home during the new coronavirus crisis. While the pair were discussing how they've been passing the time in self-isolation, both Isaacs and Felton mentioned that they had recently watched Tiger King, the outrageous series that profiles Maldonado-Passage and his years-long feud with Big Cat Rescue founder Carole Baskin. It was then that Felton revealed he actually ran into the man known as Joe Exotic long before the rest of us.

"Weirdly, I did a film a year or so ago where we did a cross country trip and one of the stops was Oklahoma," Felton recalled, referencing Braking for Whales. "We filmed in this bar and the owner of the bar was this nutter who walked in with the full-on mullet and the hat and ... two guns, I think he had. We were all like, 'Who the hell is this guy?' And lo and behold, two years later, he's got a documentary on Netflix."

"Wait, that was him, the Tiger King?" Isaacs asked in disbelief, before Felton confirmed that he did, in fact meet Maldonado-Passage during filming. "So [that's a] very strange coincidence there," Felton said, in what might be the understatement of the year.

In addition to chatting about Tiger King, Felton and Isaacs also shared the things that are keeping them sane while social distancing. In particular, the pair named, darts, streaming services — Isaacs says he subscribes to "every single [one]" that's available — and mountains of junk food as their preferred ways of passing the time. "My diet has totally changed," Felton explained, before adding that "I'm still on mostly Kit Kats and salt and vinegar crisps right now."

The Harry Potter costars have remained close since filming wrapped on Deathly Hallows Pt. 2 back in June 2010. Isaacs has shared many tributes to his onscreen son on Felton's birthday over the years, often joking about their long-lasting bond and their cinematic relationship. "You've brought the Malfoy name into horrendous disrepute by turning out to be a gorgeous human being and a fairly average guitarist," Isaacs wrote about his "favorite son" back in 2018. "I'm so ashamed and proud of you," he continued.

In 2019, The OA star even revealed that he calls himself the younger actor's "Bad Dad" in a sweet birthday message. "Proud and lucky to be switching roles as you get wiser and I show my true colours," Isaacs wrote on Instagram at the time. "Hope you've had a day full of self and free of selfies. Have some cake, sing a song and pull a wheelie for me, son. Happiest Birthday, [from] Bad Dad."

Thankfully for Harry Potter fans everywhere, Isaacs and Felton aren't letting social distancing stop them from reuniting for a friendly chat — and to provide us all with the memorable image of Draco Malfoy hanging out with Joe Exotic.

More like this
Anne Hathaway Shared A "Thrilling" 'Princess Diaries 3' Update
By Darshita Goyal
Sandra Bullock’s Razzies Speech Proves She’s The Ultimate Miss Congeniality
By Sam Ramsden
The OG Power Rangers Are Returning For A Spandex-Clad Special
By El Hunt
Rupert Grint Just Shared A *Major* Update About Ron Weasley’s Future
By El Hunt
Get Even More From Bustle — Sign Up For The Newsletter
From hair trends to relationship advice, our daily newsletter has everything you need to sound like a person who’s on TikTok, even if you aren’t.