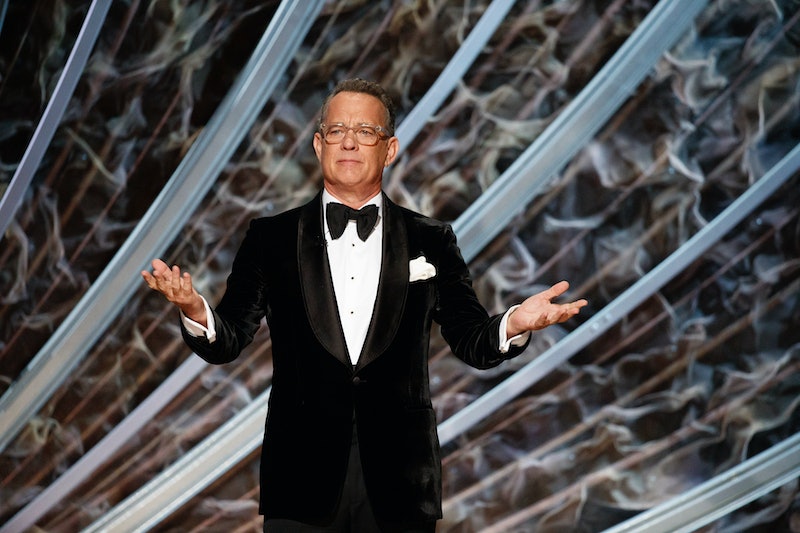 One celebrity couple is doing their part to promote social distancing. Tom Hanks' latest coronavirus update stresses shelter-in-place, encouraging fans to look-out for each other and their communities. On March 11, Hanks confirmed testing positive for COVID-19, along with his wife, Rita Wilson, on Instagram. The couple contracted the virus while in Australia for pre-production on Baz Luhrmann's Elvis Presley biopic. Warner Bros. reportedly halted production and worked with Australian health agencies to ensure the safety of all other members of the film's team, as per Deadline. On March 16, Wilson and Hanks were released from hospital isolation, and sent home with an order to self-quarantine.

On Sunday, Hanks posted a new health update on Twitter, and included a message for fans about shelter-in place protocol. He wrote: "Hey, folks. Two weeks after our first symptoms and we feel better. Shelter-in-place works like this: You don't give it to anyone - You don't get it from anyone." The A Beautiful Day In The Neighborhood star acknowledged that social-distancing would be uncomfortable, but necessary. "Going to take awhile, but if we take care of each other, help where we can, and give up some comforts...this, too, shall pass."

Hanks, who has served as a public voice of calm and reason since being diagnosed, added a positive sign-off at the end of the update. He wrote: "We can figure this out. Hanx."

Wilson and Hanks were among the first celebrities to confirm a COVID-19 diagnosis, and the couple have kept fans updated on social media throughout the recovery process. On March 12, Hanks posted a selfie with Wilson from the hospital on Instagram, writing, "We are taking it one-day-at-a-time. There are things we can all do to get through this by following the advice of experts and taking care of ourselves and each other, no?"

On March 17 , Hanks shared yet another health update on Twitter, assuring fans that the couple were on the mend. "Good News: One week after testing Positive, in self-isolation, the symptoms are much the same. No fever but the blahs." The actor once again stressed the importance of social distancing in order not to overwhelm hospitals, writing, "We are all in this together. Flatten the curve."

The actor also thanked healthcare workers on Twitter, posting a photo of a stuffed kangaroo, Australian flag, and toast with Vegemite, a quintessential down-under snack. He wrote, "Thanks to the Helpers. Let’s take care of ourselves and each other. Hanx." The post references a popular quote from Fred Rogers, whom Hanks recently portrayed in A Beautiful Day In the Neighborhood.

Fans of the beloved actor will likely be comforted to hear that Hanks and Wilson are feeling better. But, most importantly, hopefully they'll listen to Hanks when he says that shelter in place is a good policy that should be followed. Not just for your own safety, but for everyone's. Don't disappoint Tom Hanks!

If you or someone you’ve been in close contact with appears to have shown or be showing symptoms of coronavirus, which include fever, shortness of breath, and coughing, visit the NHS website in the UK to find out the next steps you should take, or visit the CDC website in the U.S. for up-to-date information and resources. You can find all Bustle’s coverage of coronavirus here, and UK-specific updates on coronavirus here.