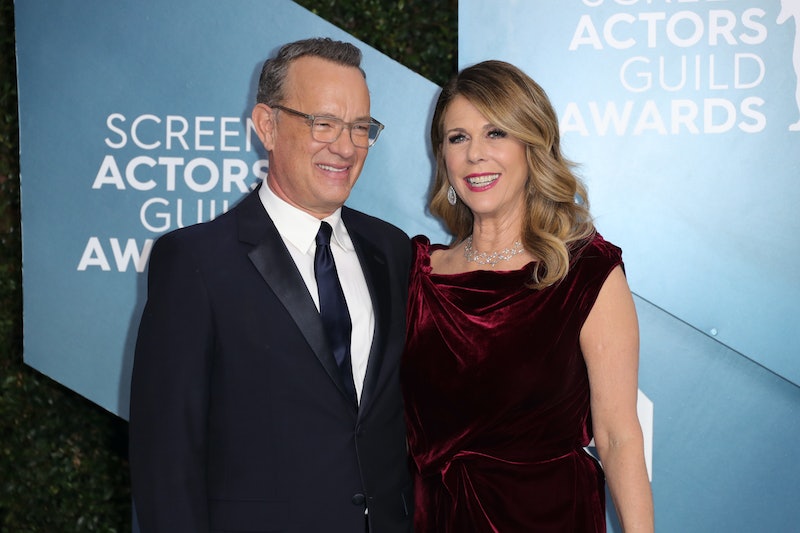 Tom Hanks is often considered to be America's dad, and he's doing his best to look after everyone in the middle of the coronavirus pandemic. According to MSN, Tom Hanks and Rita Wilson donated blood towards the development of a coronavirus vaccine now that the actors have both fully recovered from COVID-19, the illness cause by the novel coronavirus. On March 11, Hanks revealed that the couple had tested positive for the coronavirus while in Australia, where he was filming Baz Luhrmann's upcoming Elvis Presley biopic.

After a few days in the hospital, both Hanks and Wilson were released and spent a few weeks in quarantine in Australia before returning home to Los Angeles, where the couple — who were now fully recovered — immediately offered to donate their blood and plasma to scientists who are working on a vaccine. "We just found out that we do carry the antibodies," Hanks said on the NPR podcast Wait, Wait ... Don't Tell Me, referring to the proteins that would be useful developing a COVID-19 vaccine.

"We have not only been approached [about donating]," he continued. "We have said, 'Do you want our blood? Can we give plasma?' And, in fact, we will be giving it now to the places that hope to work on what I would like to call the 'Hank-ccine.'" (Truly, nothing can be more comforting than the idea of a vaccine named after Hanks.)

On April 19, Hanks opened up about his COVID-19 symptoms during an appearance on The National Defense Radio Show, where he explained that he primarily dealt with "bad body aches and was very fatigued." During the couple's three-day hospital stay, Hanks found out just how fatigued he was, when he attempted to exercise in his room and was "wiped" after just a few minutes.

After a member of the staff came into "our air pressurized, isolation rooms" to check on him, Hanks told her, "'I just tried to do basic stretches and exercises on the floor and I couldn’t even get halfway through. And she looked at me through her glasses like she was talking to the dumbest human being. And she said, 'You have COVID-19.'"

Despite that awkward moment, Hanks admitted that Wilson's symptoms were much more intense than his, noting that at one point, the actor and singer was "so nauseous, she had to crawl on the floor from the bed to the facilities." He recounted, "Rita went through a tougher time than I did. She had a much higher fever. She had lost her sense of taste and sense of smell. She got absolutely no joy from food for a better part of three weeks."

On April 11 — one month after revealing his diagnosis — Hanks revealed during his Saturday Night Life "at-home" monologue that both he and Wilson had made a full recovery, saying, "we're doing fine, we're doing great." He also poked fun at the public reaction to the news that he had tested positive for COVID-19 joking that he is "more like America's dad than ever before because no one wants to be around me very long, and I make everyone uncomfortable." Between his goofy jokes and his quest to help everyone get better, Hanks is truly living up to his title during the pandemic.