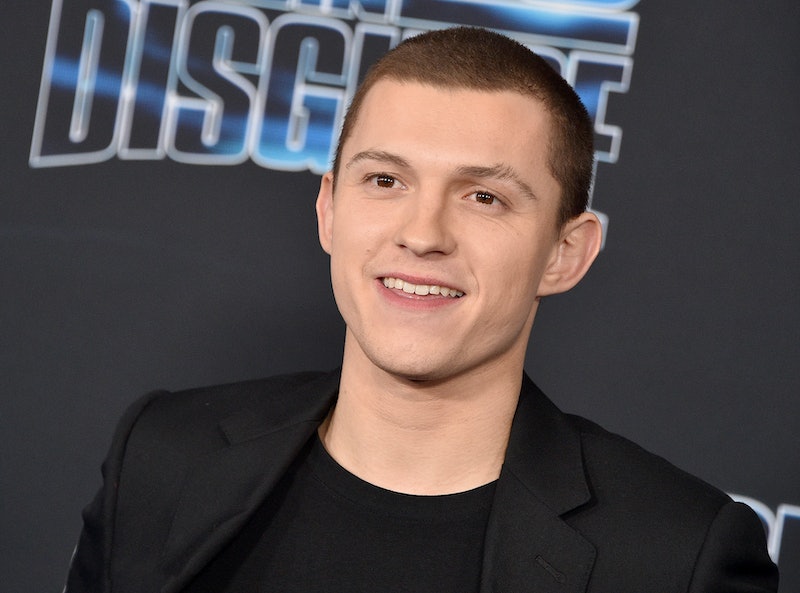 Tom Holland is a real-life superhero — even under the influence. During a Dec. 4 interview with Jimmy Kimmel, Holland revealed how he saved Spider-Man from leaving the Marvel Cinematic Universe (MCU). And far from Peter Parker fashion, the 23-year-old British actor admitted he chatted with Disney CEO Bob Iger while he was drunk and playing bar trivia.

During his Jimmy Kimmel Live! appearance, Holland told Kimmel that he was "devastated" when he initially learned in August during the D23 Expo that Sony and MCU failed to reach an agreement about Spider-Man's future rights, which meant that Spider-Man would no longer be a part of the MCU. Holland was so upset that he asked for Iger's email to thank him for the "amazing five years of my life." Holland said Iger responded to his email right away and asked the actor when he was free to chat. But, as he told Kimmel, "You don't give Bob Iger like a schedule. You're like, 'Whenever, Bob.'"

It turns out, he might have regretted that choice. After a couple days, Iger called, but the young actor wasn't really in a professional setting. He was sitting in a local pub, "three pints in," playing trivia with his family. His first thought upon seeing a phone call from an unknown number: "I think this is Bob Iger, but I’m drunk." The actor told Kimmel that he hesitated to answer, but luckily, he picked up the phone, helping save Spider-Man in the process.

On Oct. 2, THR first reported the rumor that Holland helped saved Spider-Man, which secured a return to the MCU in September. And, the following day, during Iger's Kimmel appearance on Oct. 3, he confirmed the report by telling the late-night host about their phone call. "It was clear that he cared so much. He's a great Spider-Man," he said. "I felt for him and it was clear that the fans wanted all of this to happen." Iger also added that "sometimes companies, when they are negotiating, they forget that there are other folks out there that actually matter."

Holland is currently set to reprise his superhero role in the third installment of the Spider-Man series, which is scheduled for a July 16, 2021, release. And with this new deal, he's also set to appear in another unspecified Marvel film.

More like this
Anne Hathaway Shared A "Thrilling" 'Princess Diaries 3' Update
By Darshita Goyal
'The Queen’s Gambit' Season 2 Tweet Wasn’t From Anya Taylor-Joy
By Mary Kate McGrath, Jack Irvin and Grace Wehniainen
Kukulkan From 'Wakanda Forever' Has A Surprising Connection To Marvel History
By Grace Wehniainen
Netflix Shut Down 'Bridgerton' S3 Rumours About A “Very Dark” Storyline
By Bustle
Get Even More From Bustle — Sign Up For The Newsletter
From hair trends to relationship advice, our daily newsletter has everything you need to sound like a person who’s on TikTok, even if you aren’t.