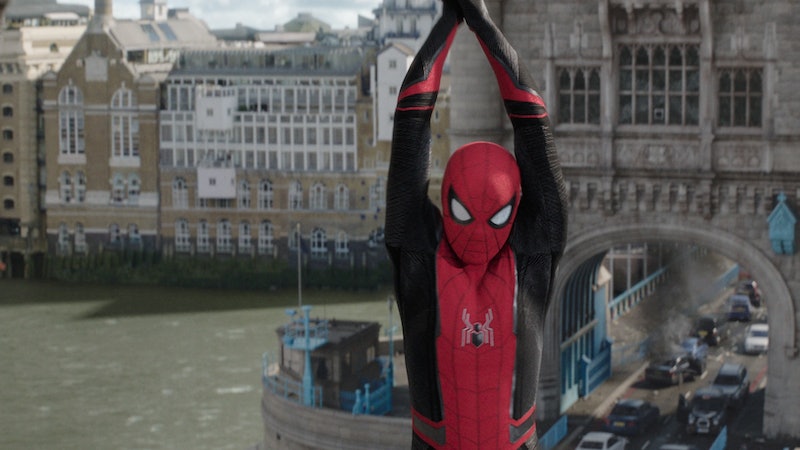 Your friendly, neighborhood web-slinger is staying right where everyone wants him — at least, for a little bit longer. On Friday, Sep. 27, Sony and Disney released a joint statement confirming that Spider-Man is staying in the Marvel Cinematic Universe for at least one more film — including the third installment of the Homecoming series and an as-yet-unspecified Marvel film — after a great deal of outcry from fans in the wake of a dispute between the two studios.

According to Deadline, the two studios reportedly failed to reach an agreement regarding the future of the rights to Spider-Man back in August, leaving his presence in the MCU — and his new role as the leader of the Avengers, as seemingly established by Spider-Man: Far From Home — in jeopardy. However, it seems that Sony and Disney have finally reached an agreement for the time being. Marvel Studios and Kevin Feige, Marvel Studios President, will produce the next installment in the Tom Holland-led Spider-Man franchise, and allow his version of Peter Parker to appear in future Marvel films, per a press release obtained by Bustle.

"I am thrilled that Spidey’s journey in the MCU will continue, and I and all of us at Marvel Studios are very excited that we get to keep working on it," Feige said in the statement.

The statement also hinted that Holland's Spider-Man isn't the only version of the Queens-based hero that fans will get to see on the big screen in the future. "[Spider-Man] happens to be the only hero with the superpower to cross cinematic universes, so as Sony continues to develop their own Spidey-verse you never know what surprises the future might hold," Feige said in the statement. As for whether that will include sequels to the Oscar-winning Spider-Man: Into the Spider-Verse, a brand new, live action franchise, or more films starring Holland, Spidey fans will have to simply wait and see.

While he didn't release his own statement on Sony and Disney's new agreement, Holland did weigh in on the news by sharing a joking video on Instagram. Shortly after the news broke on Sep. 27, Holland posted a clip from The Wolf of Wall Street in which Leonardo DiCaprio's character, Jordan Belfort, tells his coworkers, "You know what? I'm not leaving. The show goes on." The actor simply captioned the clip with a sly-faced emoji, rather than sharing an official statement on the new agreement.

In August, Holland thanked fans at the D23 panel for supporting him in though all of the uncertainty after Sony and Disney's original announcement. According to IndieWire, the actor told the crowd, "It's been a crazy week, and I love you all from the bottom of my heart, and I love you 3000."

After the panel, Holland explained to Entertainment Weekly that he was choosing to remain positive that Sony and Disney would be able to work out some kind of agreement that would allow him to continue to play Peter Parker. "Basically, we've made five great movies. It's been five amazing years. I've had the time of my life," Holland said at the time. "Who knows what the future holds? But all I know is that I'm going to continue playing Spider-Man and having the time of my life. It's going to be so fun, however we choose to do it."

"The future for Spider-Man will be different, but it will be equally as awesome and amazing, and we'll find new ways to make it even cooler," he continued. Based on the studios' newest statement, it seems as if Holland will indeed get to continue to have the time of his life as everyone's favorite web slinger — and the MCU will continue to have Spider-Man for a little while longer.