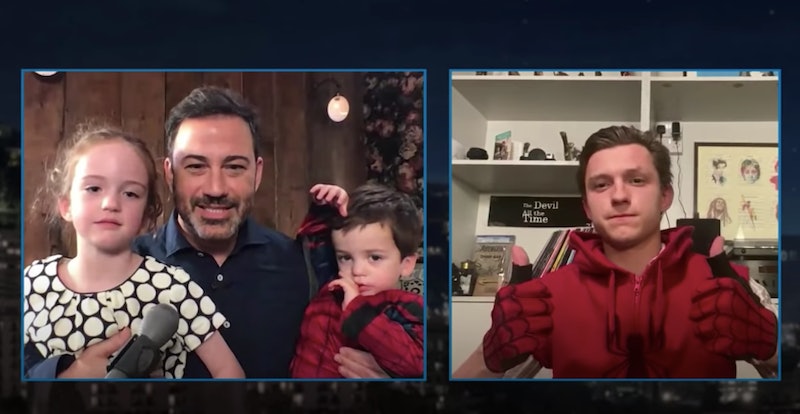 He really is your friendly neighborhood Spider-Man. Tom Holland surprised Jimmy Kimmel's son for his third birthday, but he didn't do it as himself. While virtually chatting with the late-night host on Tuesday, April 21, Holland channeled his Marvel character, Spider-Man (aka Peter Parker), in order to wish Kimmel's son, Billy, a very happy birthday.

Billy is a huge Spider-Man fan and was even wearing his very own Spidey suit while chatting with "Peter Parker." As Kimmel explained, since most everyone is practicing social distancing and many states are under stay-at-home orders, Billy's Spider-Man-themed birthday party didn't happen. So, the comedian asked Holland to step in, because celebrities have that kind of superpower. "We promised him that the real Spider-Man would come to his party," Kimmel explained to Holland. "Now, of course, we were just going to hire a guy in a suit, but now nobody's coming to his party, his party is just us, and I was wondering if you would say hello to him. I can't guarantee it's going to register, but would you mind?"

Of course the 23-year-old Marvel star obliged. What made the birthday surprise even better is that Holland wore a homemade superhero outfit — hoodie, ski mask, and gloves — inspired by his character's makeshift Spider-Man suit seen in Spider-Man: Homecoming. In his full American accent, Holland said, "Hey, Billy, it's nice to meet you. My name's Peter Parker. I live in Queens, New York." Billy was definitely surprised and also shy in the presence of Holland as Parker. He even hid his head in Kimmel's chest.

As adorable as the entire interaction was, including Holland his buddies singing "Happy Birthday" to Billy, Kimmel's daughter, Jane, stole the show. She even told Holland he was "cute." It's clear she's already a girl in charge at just 5 years old.

Holland may have not been able to be there in person, but Kimmel web-slinging the actor for a virtual hello as Peter Parker will definitely go down as one of Billy's best birthday memories.