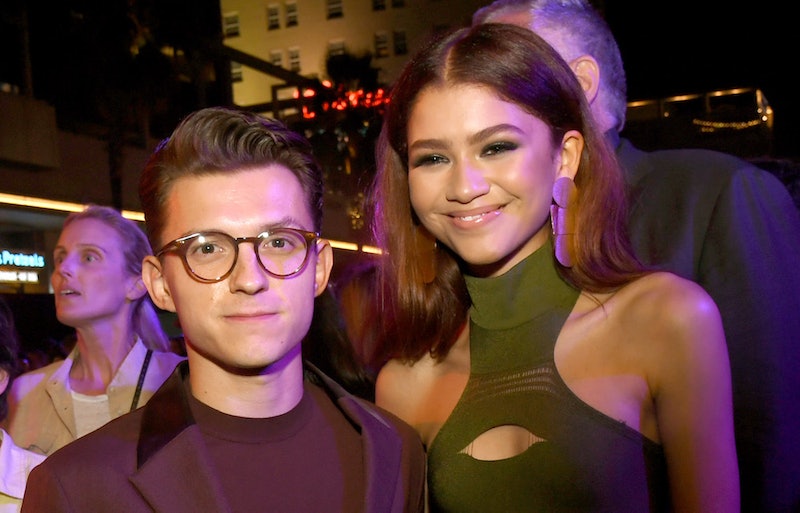 On Instagram on Sept. 27, Holland responded to the news with a clip from Martin Scorsese’s 2013 dramedy The Wolf of Wall Street, which starred Leonardo DiCaprio as Wall Street stockbroker and fraudster Jordan Belfort. In the post, captioned simply with a smirk emoji, Holland shared a dramatic clip from the film in which a disgraced Belfort tells his shell shocked colleagues, “You know what? I’m not leaving.” He continues in the scene, “I’m not leaving. I’m not f*cking leaving! The show goes on!” The Wall Street employees then burst into rapturous applause.

The message is clear: Spider-Man is not leaving. Elsewhere on social media, Holland’s co-star Zendaya, who plays MJ in the franchise, offered her own approval of the news. On Instagram Story on Sept. 27, the actor shared a picture of Homecoming and Far From Home director Jon Watts — who's currently in final talks to return to direct the third film, according to a Sept. 27 Deadline report — flashing photographers a thumbs up. On Twitter, she also shared a dancing Spider-Man gif.

The third Spider-Man is scheduled for a July 16, 2021 release, with both Holland and Zendaya expected to reprise their roles. According to a Sept. 27 report from Variety, the newfound agreement stems from Marvel Studios’ president Kevin Feige reportedly reaching a deal with Sony Pictures that would allow Marvel to receive “roughly 25%” of the profits. More so, the deal also means that Spider-Man will appear in one more future Marvel Studios project in addition to Spider-Man 3.

“I am thrilled that Spidey’s journey in the MCU will continue, and I and all of us at Marvel Studios are very excited that we get to keep working on it,” Feige said in a statement. “Spider-Man is a powerful icon and hero whose story crosses all ages and audiences around the globe. He also happens to be the only hero with the superpower to cross cinematic universes, so as Sony continues to develop their own Spidey-verse you never know what surprises the future might hold.”

Robert Lawson, chief communications officer for Sony Pictures Entertainment, echoed Feige’s sentiments in a statement. “We have had a great collaboration over the last four years, and our mutual desire to continue was equal to that of the many fans,” Lawson said, as per Variety’s report. “We are delighted to be moving forward together.”

Spider-Man is back in the MCU, folks — and Tom Holland and Zendaya approve.

More like this
Gabby & Rachel Reveal How That 'Bachelorette' Rose Ceremony Twist Happened
By Grace Wehniainen
7 Of The Highest Highs (& Lowest Lows) From Love Island 2022
By Victoria Sanusi
Everything To Know About 'RHOC' Season 17
By Brad Witter and Sophia Moore
Why Did Meatball Leave 'The Bachelorette'? His Second Chance Didn’t Last Too Long
By Grace Wehniainen
Get Even More From Bustle — Sign Up For The Newsletter