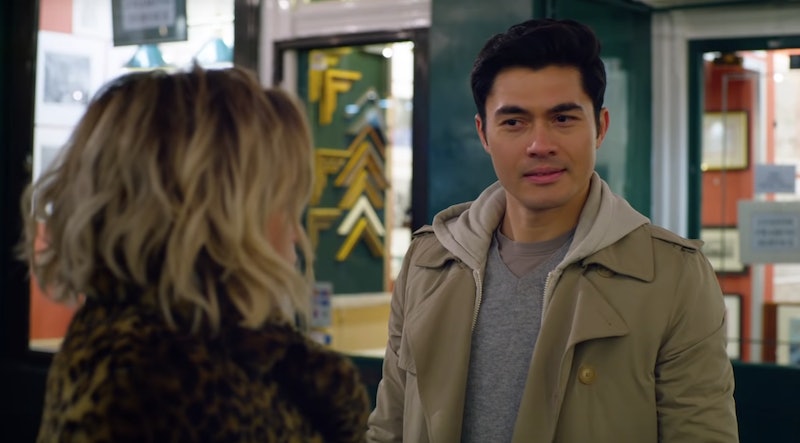 Major Last Christmas spoilers ahead. Henry Golding, with his dashing good looks and approachable charm, is the physical embodiment of a man who seems too good to be true. So the fact that his Last Christmas character Tom just so happens to befriend Kate (Emilia Clarke) at a time when she's spiraling out of control set off some alarm bells among fans when the trailer was released. Is Last Christmas a simple holiday rom-com, or does Tom's suspiciously perfect demeanor hint at a twist? It turns out that if you see the movie, you might find yourself haunted by more than the George Michael songs stuck in your head.

Let's start at the beginning. It's long been known that Last Christmas screenwriters Emma Thompson and Bryony Kimmings would be basing the film on the Wham! song of the same name, the most famous lyrics of which are: "Last Christmas, I gave you my heart/But the very next day you gave it away." At first, it might just seem like the movie would be about two people falling in love at Christmastime, but the trailer strongly hinted at something more literal: a character would have given away their actual heart last Christmas.

The movie, from director Paul Feig, confirms this. Tom is a man who died and whose heart was donated to Kate, a woman who was in need of a transplant the previous December. Of course, this reveal comes at the end of the film, so it's not entirely apparent how, where, and why Tom exists to Kate.

Kate is able to see Tom for the entirety of the movie. They have deep, meaningful conversations. They go ice skating. They kiss. In the end, Tom explains that he and Kate are connected in this supernatural, I-see-dead-people way because she has his literal heart, but it's not explicitly said that he's an angel or some other kind of supernatural being.

Which leaves another option open: Kate is imagining Tom — perhaps as part of a psychological disorder, perhaps as an embodiment of her subconscious. During their most intense conversation in the movie, Kate tells Tom that she doesn't feel she's right in the head. And when Kate finds out that Tom died a year ago, her reaction implies a questioning of her sanity. (Of course, realizing you can see an angel would make one question their sanity, too, but that doesn't seem to be the case here because we're shown a montage of flashbacks of Kate talking to herself.)

It could be that Tom lies somewhere in the middle: an angel, but one that Kate is able to access due to her mental state. After all, Tom was a real person. He takes her to his actual former apartment (or, in a sense, she takes herself), and later, a realtor confirms that Tom Webster was the person who lived there before he died. Tom also has a motivation: He tries to teach Kate to be a better, more giving person. (Just as a side note here: The woman had a heart transplant a year ago. Give her some time.)

On the other hand, Tom doesn't tell Kate that he's dead, which feels a bit un-angelic and dishonest of him. Also, Kate could be teaching herself to be a better person via her visualization of Tom, because her subconscious knows it's the right thing.

Either way (or both ways), it's a surprising amount to grapple with for a movie that presents itself as a rom-com inspired by Wham!. The film doesn't explain the answer one way or the other, or make clear whether we're even supposed to be left curious about Kate's mental state.

But, yeah, if you came here just wondering if Tom is dead — yes, he is. Very dead and very much pulling off that trench coat.