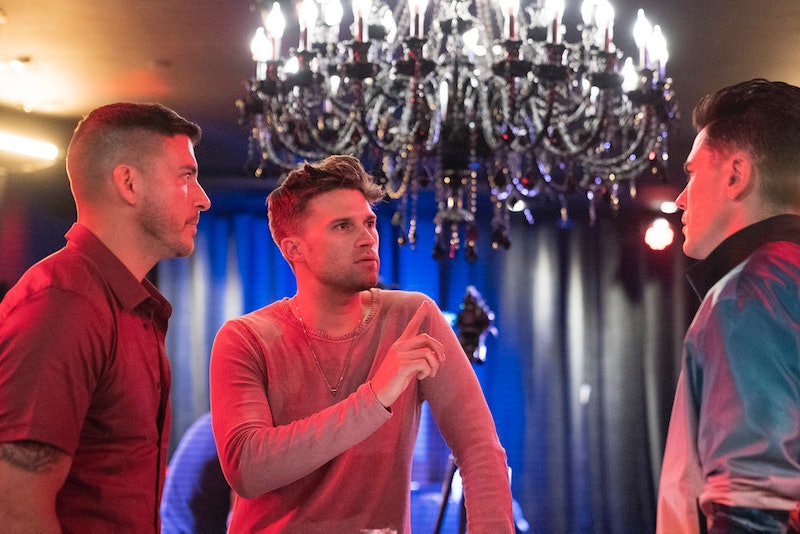 Between all the lies, betrayal, and insults that have been hurled back and forth over the years, it can be hard to morally police the cast of Vanderpump Rules. On the one hand, they're human and thus bound to make mistakes. On the other, they've done some pretty messed up stuff to one another. There is, however, one person who seems to slide by without consequence no matter how egregious his actions — and no, I'm not talking about Jax Taylor. Vanderpump star Tom Schwartz has gotten away with pretty much everything scot-free, and it's time that we talk about it.

For seven seasons, Schwartz has skated by with puppy dog eyes, youthful charm, and an "aw, shucks" attitude. It's not that he's a bad person, it's just that he tends to let the blame fall on others rather than taking responsibility for the things he's done. Jax, for example, has committed way worse offenses: shoplifting, lying compulsively, cheating on almost every woman he's ever been with. But the difference between Jax and Schwartz is that Jax does always eventually admit to his wrongdoings, and based on Season 7, he seems to have learned from those experiences and is now actively working to become a better person. That doesn't justify his past transgressions by any means, but it does, unfortunately for Schwartz, make him more accountable.

Schwartz, on the other hand, is Teflon. Remember when he admittedly cheated on Katie during a trip to Las Vegas with Jax and Tom Sandoval (actually, everyone allegedly cheated on their significant others in Vegas at one point or another)? Yes, he did cop to the Vegas incident, but it was pretty immediately forgotten. And while it sounds like he and Katie worked through it privately, it does put into perspective some of the show's earlier episodes — especially considering that, after they were married, rumors of infidelity once again emerged and he was so drunk that he couldn't remember whether or not they were true. Originally, Schwartz wasn't featured as prominently on the show, which made it easier to see Tequila Katie — her self-proclaimed drunk alter ego — freaking out on him as an overreaction. However, as he's become a more integral part of the cast, it seems like Schwartz could have played a bigger part in their issues than we initially saw.

As their fight during the March 25 episode showed, Schwartz also isn't the best at listening to his wife. Katie told him repeatedly that she was feeling neglected, but according to him, he never heard it. It's possible Katie wasn't as direct as she thought she was, but it's also become kind of a pattern for Schwartz. It took him years to understand where she was coming from regarding getting engaged, and he only proposed after she gave him an ultimatum (but let's not forget the ring-on-a-string moment, where she specifically said she didn't want a ring on a string, and he bought her...that exact thing).

Even more infuriating, as Ariana recently pointed out, is that Sandoval always ends up shouldering the blame when it comes to his and Schwartz's antics. Who was the person who invited James to Mexico this season? Schwartz, not Sandoval. Who invited James on the trip even though James called his wife fat and made her almost quit her job? Schwartz! Who made Sandoval un-invite James when the whole thing blew back in his face? Also Schwartz.

To be fair, Schwartz has certainly done some growing up. He's committed to a job at TomTom and has been working hard at it, and he's also cut back on his drinking. However, it's still unfair that he continuously skates by without consequence because of a fun-loving persona and a cute smile. It's high time that Schwartz be the adult that he is and take responsibility when he makes a mistake. Everyone has to pay the piper eventually — even on Vanderpump Rules.