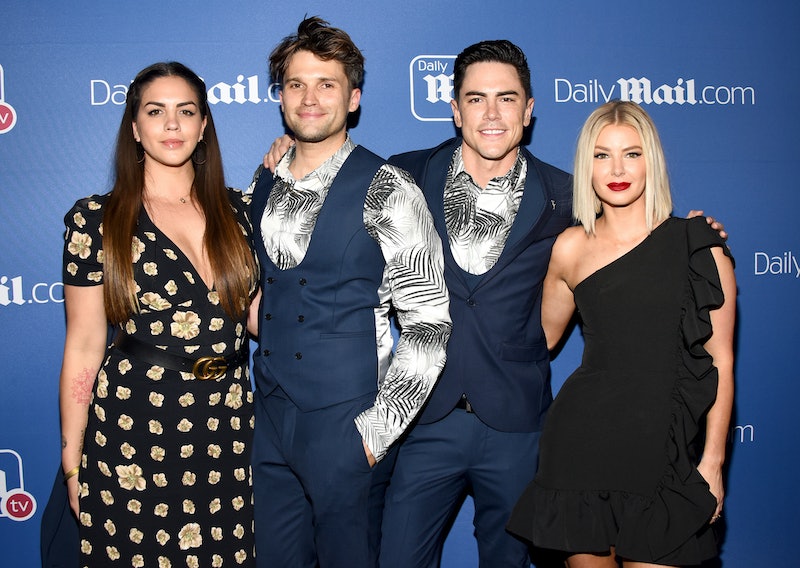 The ribbon has been cut, the customized motorcycle has been parked in front of the joint, and the Gentleman's Curses have been poured, so you know what that means: Tom Tom's opening day is upon us. Over the weekend, the Tom Tom Instagram account revealed they would be announcing the opening to the public this week, and it really looks like the bar Lisa Vanderpump, Ken Todd, Tom Sandoval, and Tom Schwartz have been working on together for the last two years is ready to go. On Sunday, Aug. 5, Tom Tom opened its doors to friends and family for a ribbon cutting ceremony.

Never ones to miss a party, Sandoval and Schwartz's Vanderpump Rules co-stars attended the ribbon cutting ceremony on Sunday. And of course, they documented the event on Instagram in all of its glorious detail.

Though I was not present for the ribbon cutting ceremony, I feel it's safe to make the following declaration: There isn't anything on this spinning rock we call Earth that could possibly replicate the feeling of standing on Santa Monica Blvd. as the Toms Sandoval and Schwartz cruise down the street on a white motorcycle while wearing matching white suits minutes before they cut the ribbon in front of the newest addition to LVP's bar empire. However, the Pumpers' IG posts may be the next best thing. (Until Season 7 airs, that is.)

So cue up "Raise Your Glass" by Dena Deadly, pour yourself your favorite beverage, light some votive candles, and give these snapshots of Sunday’s Tom Tom event a scroll.

Here Are The Toms Riding The Tom Tom Motorcycle

The goggles. The sidecar. The Tom Tom logos on the bike. All of it is perfect.

Here Are The Toms Posing Atop The Tom Tom Motorcycle

Oops, still not over the Tom Tom logos on the bike.

Here Are The Toms & LVP Cutting The Ribbon

Here Are The Toms With Their Significant Others

Yes, Schwartz, the very same human who dipped out on his only bartending shift at PUMP a billion years ago, made drinks at Tom Tom. What a world.

And Here Is The Evening's Drink Menu

Ah, yes. There is a cocktail called the Kentucky Muffin. Because what would the Tom Tom menu be without a reference to that joke LVP made about Kristen Doute and Brittany Cartwright at the top of Season 5?

Congrats to the Toms, LVP, and Ken. And to the helmets. Man, those helmets SUR-e do Vanderpump rule.