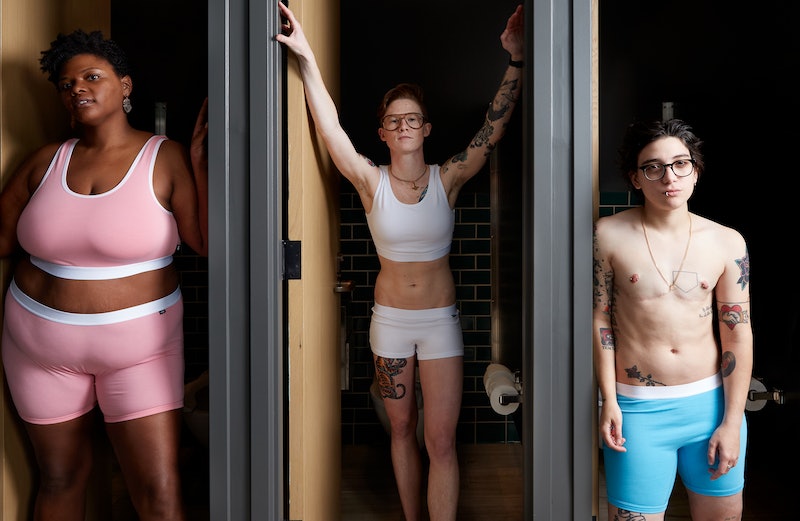 On March 31, the U.S. celebrates Trans Day of Visibility. It is a day created to celebrate the lives and accomplishments of transgender and gender non-conforming people, while also raising awareness of the discrimination and threats the community still faces today. To recognize the day, TomboyX's launched its Trans Visibility Day undies to help customers show their trans pride.

If you aren't familiar with TomboyX, the queer-owned brand was created by married couple Fran Dunaway and Naomi Gonzalez. Originally, the brand began as a clothing line meant to provide fashions to those who didn't fit the traditionally gendered mold. However, after the brand launched, Dunaway and Gonzalez received ample praise for their gender inclusive underwear, and the company rebranded to create TomboyX to focus more closely on undergarments.

The concept of gender-free underwear can be seen as soon as you head to the brand's website. Once there, shoppers will find that the underwear TomboyX makes isn’t separated by gender at all but is instead classified based on the types of underwear. From briefs to boxers to bikinis and bralettes, the brand creates it all — but also understand that gender doesn’t dictate the undies someone may choose.

Now, TomBoyX is launching new items for Trans Day of Visibility, and the new pieces will help customers show support for trans and gender non-conforming people long after March 31 is over. To show them off, TomboyX partnered with indie musician and all-around heartthrob Ryan Cassata for the campaign.

For the holiday, TomboyX is debuting three new releases. The first is selected three packs of some of their underwear styles. The three packs feature a pink, blue, and white item meant to represent the trans pride flag. Customers can shop the packs for between $36-$58, depending on their needs. Options include boxer briefs, soft bras, trunks, and more.

The three packs, however, aren’t alone. The brand has created a brand new style of boxer briefs specifically with trans men in mind. The new 6” Packer Boxer Brief comes with a deep, elasticized packet meant to hold a packer — a prosthetic penis — against the body. The new boxer brief doesn’t come in the the pink, white, or blue shades as the sets, but they are offered in black for $30 and in sizes XS-4X.

Finally, there are the trans pride flag striped undies. The brand has created a special pattern, strips in the colors of the trans pride flag, that will be available on every single underwear style they sell. Essentially, this means that anyone who shops TomboyX can show (or not show, since it’s undies) their support for or community with trans and gender non-conforming people.

If you want to shop any of TomboyX's releases for Trans Day of Visibility, all of the pieces are available now. Thanks to TomboyX's commitment to inclusivity, all bodies will be able to sport the brands' latest trans celebratory launches, making it the perfect choice for the next time you're looking for the perfect pair of underwear.