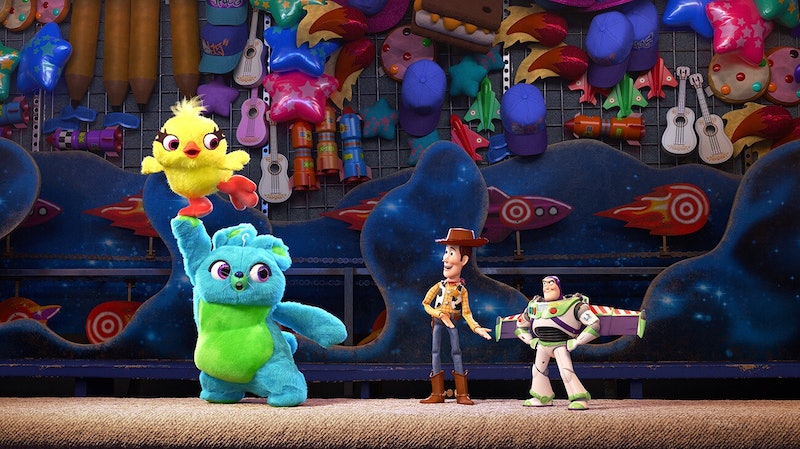 Toy Story 4 is almost upon us, and the June 21 release looks like it could be the swan song for Pixar's OG animated franchise. But fans have heard this story before. If you recall, Toy Story 3 was supposed to have ended the series back in 2010. So is Toy Story 4 the last one for real, or will Pixar go ahead and announce Toy Story 5 in a few years' time and swear that that will be the final installment?

Surprisingly, there hasn't been any official confirmation announcing that Toy Story 4 will be the final Toy Story. And given the obvious love for the franchise the Pixar studio heads seem to have, it would seem foolish to rule out a fifth Toy Story movie. "Every film we make, we treat it like it’s the first and the last film we’re ever going to make," Pixar's Mark Nielsen said during a press day for the film in May, according to Comicbook.com. “So you force yourself to make it hold up. You don’t get in over your skis. Whether there’s another one? I don’t know. If there is, it’s tomorrow’s problem."

But judging from the buzz surrounding the film, some comments made by the cast, and Pixar's own recently announced new direction, it really does appear as though Toy Story 4 is going to be the franchise closer.

First, you can take a look at some comments made by the main cast, namely stars Tom Hanks (Woody) and Tim Allen (Buzz Lightyear). Hanks flat out told Ellen Degeneres during an appearance on her eponymous talk show in May that the film was the last in the franchise. "This is the end of the series," Hanks said, before going on to reveal that Allen had also texted him about the film's emotional ending before he'd read the script. "The last few (recording) sessions, we were saying goodbye to Woody and Buzz and Bonnie's room and Andy and everybody, and it was emotional."

Allen also discussed the film's ending during an appearance on The Tonight Show with Jimmy Fallon in November, and while his comments had less of an air of finality to them, he still made it seem as if Toy Story 4 will be a hard film to come back from. "The last scene of that movie, I couldn't even get through it," Allen said. "It was so emotional. It's a 'Scarlett, I don't give a damn' moment." Allen is of course paraphrasing the ending to one the most iconic films of all time, Gone with the Wind, a movie that has gone 80 years and counting with no proper sequel (no, the '90s TV miniseries doesn't count).

Then there are the recent comments out of Pixar, where Mark Nielsen revealed that the studio will be moving forward with an exclusive focus on original productions following several sequel-heavy years. According to Nielsen, the studio's new chief creative officer Pete Docter is "really looking out for the new voices and really loading up the development pool," he told The Hollywood Reporter in May. "It’s all original films after [Toy Story 4] right now."

With Tom Hanks and Tim Allen sounding like they're finished in their respective roles as Woody and Buzz, along with Pixar's current focus on original features, it really does look like Toy Story 4 will be the end of the franchise. But with no official declaration that this is the end, there's still a chance that Woody, Buzz, and the rest of their plastic pals could someday spring to life once again.