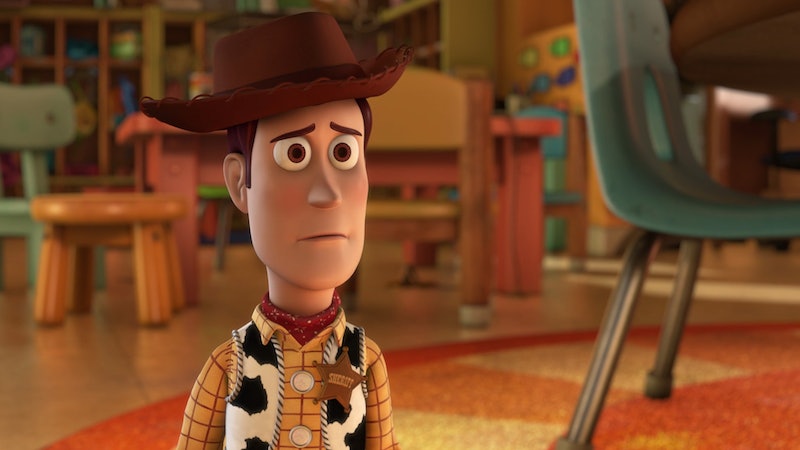 Is it possible that infinity might not go beyond the next Toy Story movie? Tom Hanks' Toy Story 4 wrap photo might signal the end for the series. That is if you read into the finality of his message, which sounds like a goodbye to Woody, Buzz Lightyear, and all of Andy's former toys – at least for now.

On Wednesday (Jan. 30), Hanks let his Twitter and Instagram followers know he was done done making Toy Story 4 in a message. But, fans started wondering if he was saying goodbye to more than this latest sequel, which hits theaters June 21. Perhaps, that's because of how many times he wrote the word "final" in his note.

"Final line, final session as Woody of Toy Story 4," Hanks wrote. "We rode like the wind, to infinity and beyond." The photo is a sweet behind the scenes shot of Hanks in the recording booth surrounded by the film's animators and producers. And while they all look pretty excited about Hanks' final line, fans were pretty emotional over the possibility that this could be the final final time Hanks would play Woody.

A fan named @nickcappelli wrote it was "the end of an amazing era," while others let Hanks know they were already crying. "Why do you have to hurt us like this," a fan named @adriennepyle tweeted.

Of course, this isn't the first clue that Toy Story 4 will be the last movie in the series. Or, that fans are going to need to stock up on the tissues before the summer.

In November, Hanks told the BBC's The Chris Evans Breakfast Show that Toy Story 4 is "going to have an impactful ending" that not even he could handle. “When I went in for my last day of recording, I wanted to have my back to them, because usually you’re facing them so you can look right up and you can talk about it,” Hanks said. “But I didn’t want to see them and I wanted to pretend they couldn’t see me. When I realized what they were going for, I realized, ‘Oh, this is a moment in history.'” Perhaps, even more so if it's the last time he'll be voicing the character.

Besides being a tearjerker, Toy Story 4 also isn't a direct sequel to Toy Story 3. "It is a separate story," Pixar Studio President Jim Morris said in an interview with Disney Latino in 2015. "It will be a romantic comedy. It will not put much focus on the interaction between the characters and children."

Last year, Toy Story 4 revealed two new characters Ducky and Bunny, yet to be claimed carnival prizes voiced by Keegan-Michael Key and Jordan Peele, respectively. This was after teasing Forky, another new character voiced by Veep's Tony Hale. Keanu Reeves is also joining the film to give Buzz Lightyear a little competition. And most recently, we also learned that Bo Peep will be back for Toy Story 4 and she's looking fiercer than ever.

Whether this is the end of the road or not, it's clear we'll always have a friend in Woody and the rest of the Toy Story gang.