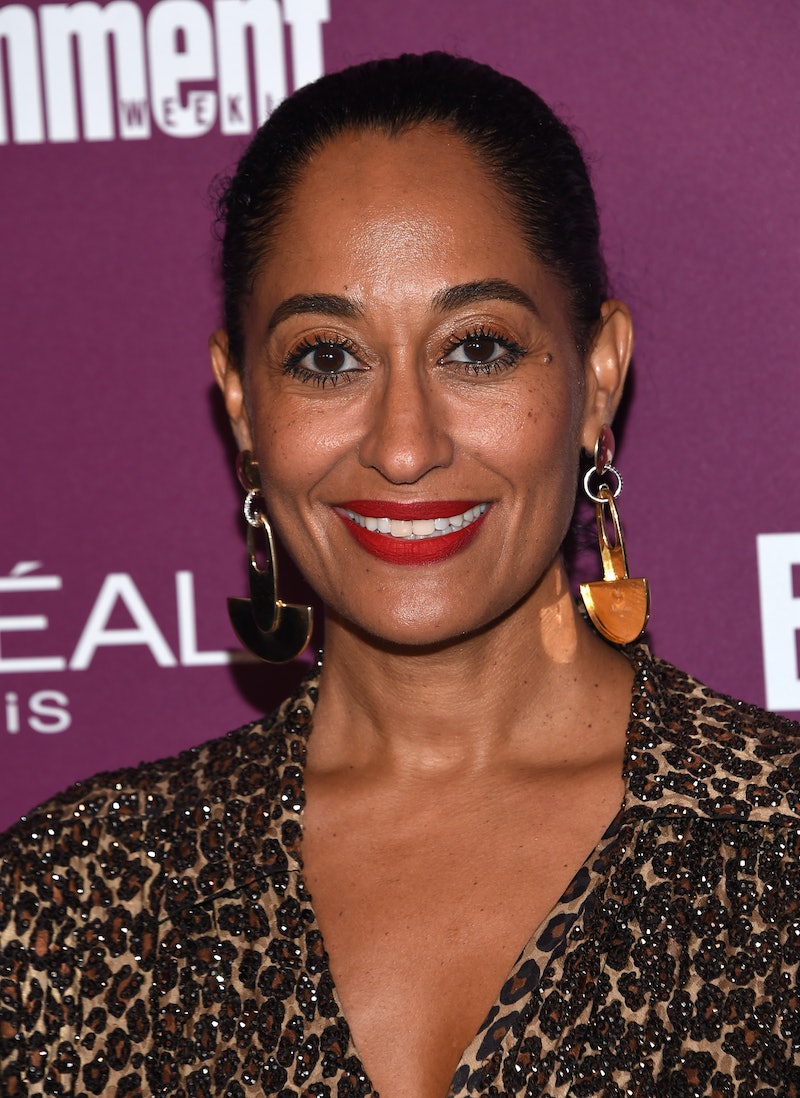 Emmys night 2017 has finally arrived, and TV's brightest stars are preparing for an evening of awards, parties, and anxiety as they wait to see if they get invited to the winner's circle. On Sunday, Outstanding Lead Actress in a Comedy nominee Tracee Ellis Ross created an Emmy song to provide the event with the epic soundtrack it deserves. Ross shared her impromptu anthem on Instagram, and listening to her belt out her flawless tune will no doubt make your day brighter.

In just a few seconds, Ross manages to say hello to Emmy day, offer up details on her beauty routine, and declare that, "black-ish is coming for you Emmys." She also gives her fellow nominee Tituss Burgess a shout-out. The Unbreakable Kimmy Schmidt actor created his own song, but it was only loosely inspired by the awards show. Instead, Burgess sang a heartbreaking ode to the pain of having to exercise even though he has a date to the Emmys — it's relatable, but it doesn't capture the glitz and fun of the night quite as effectively as Ross' tune does.

The creative Mr. Burgess started the song trend, but this battle of the Emmys anthems has to go to Ross. She stays on-point, hits some astounding high notes, and extols the virtues of skin hydration. It's going to be hard for anyone to beat such a thoughtful and moving (and hilarious) tribute to TV's biggest night.

At the rate she's going, Ross is going to end up winning the Emmys VIP award for her enthusiasm for the weekend's festivities. OK, so that's not a real award, but it should be. Not only is the actor an official nominee, she's also a presenter, and she's been representing hard for the black-ish cast with a bevvy of posts on social media.

Ross has taken her fans with her through the full range of events the weekend has to offer. From party prep to hanging out with her good luck charms (also known as her nieces), the actor seems to be having a blast. And her enthusiasm is catching. It's nearly impossible to look at a photo of Ross laughing in an elevator while holding a beer that she doesn't actually like to drink without smiling. Her joy is so apparent, not grinning isn't an option.

Even though she's in a tough category, Ross should take home the Emmy, and not just because she's so devoted to making the awards show process a blast. Ross is coming off of her best year yet on black-ish. She gave a performance that was heartwarming, honest, and laugh out loud funny. Despite being up against Emmys favorite Julia Louis-Dreyfus, the black-ish actor should have a real shot at winning thanks to the wonderful comedic performance she offered up last season.

Whether she wins or loses, it's clear Ross is going to have fun on Sunday night. The star appears to be ready to soak up everything the event has to offer. Anyone who creates their own personal Emmys theme song has to be a fan of the ceremony, right?

She's so committed that she got dressed at work in order to kick-off the weekend festivities in style. That's just further proof that Ross puts her all into everything she does. This amazing actor has perfected the art of mixing work and play.

Just look at her striking a pose in what appears to be the black-ish parking garage.

Now that Ross has shown the Emmys so much love, it's only fitting for the awards show to give her some love back. With any luck, Ross' Emmy weekend will end with her bringing home a shiny, new statuette that she can sing, "Hello, Emmy" to every morning.