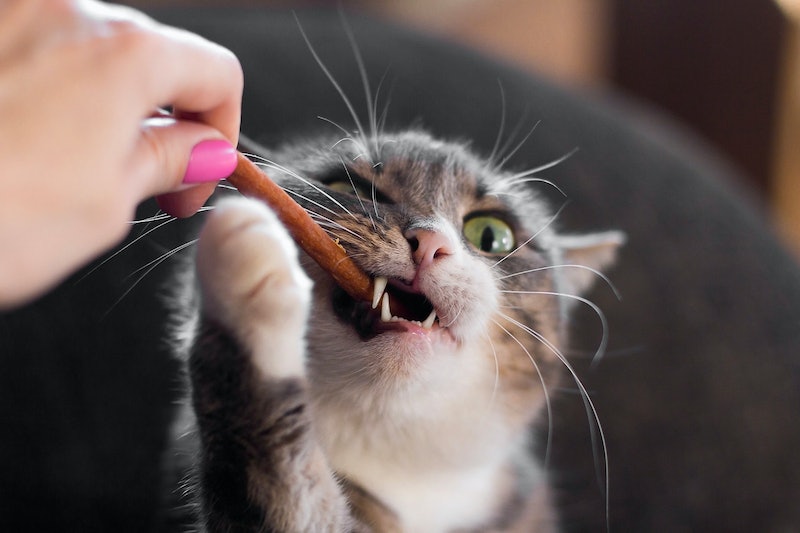 Some people call fall "cuffing season," but these days it may be more appropriately titled "prospective advent calendar hunting season." There are so many options of cute little things that have been shoved in prepackaged cardboard holes that it can be overwhelming to navigate. While you may not know which advent calendar you want for yourself this year, at least one problem has been solved — your furriest friend can now get in on the fun, because Trader Joe's is launching advent calendars for cats full of itty bitty treats.

The advent calendars were announced in a podcast episode of "Inside Trader Joe's," where hosts Tara Miller, Trader Joe's marketing director, and Matt Sloan, TJ's vice president of product marketing, frequently give customers the inside scoop of what's going on with the popular grocery chain. The Sept. 16 episode was filmed live at the annual "Captains' Meeting" for store managers, where members of the product innovation team led people through a few new products they could expect to see hit shelves soon.

"Last year we came out with the dog advent calendar, which seemed pretty odd until we got out in the stores and there was quite a following for it," Colin Fields, vice president of merchandising, shared on the podcast. "And we heard from our feline-loving customers that we should have something for their cats. So we found it, we developed it and it's pretty cool." Per Fields, the inside is filled with "magical treats made of salmon and seaweed."

The aforementioned dog advent calendars were, indeed, a hit last year — they were also first announced on a podcast episode of "Inside Trader Joe's," where they generated buzz long before they hit shelves. The end result was "Salmon & Sweet Potato Dog Treats," which were packaged in this adorably illustrated advent calendar with 24 days worth of goodies.

"These smoked salmon treats are made from salmon raised without antibiotics, from the cold waters of northern Scotland," the back of the box read. "The salmon is combined with sweet potato and smoked over natural hardwood, creating a treat that dogs go crazy for!"

Given the success of last year's dog advent calendar, it's reasonable to assume that it will be back alongside the new cat version — if we can count on TJ's for anything, it's to bring back seasonal favorites based on customer demand. In the meantime, the cat advent calendar isn't the only new item you can expect to hit shelves soon. According to the podcast, we'll also be treated to Chocolate Lava Gnocchi, a dessert you can most definitely have for dinner; a competitor for the "Impossible Burger" that will retail for $4.99; Kung Pao Chicken Mochi Balls, ambitiously combining sweet and savory dishes; and an Organic Chickpea and Lentil Rizoni. It looks like it's going to be a delicious end to 2019 for everyone, for humans and furry friends alike — just make sure to keep your eyes peeled for the advent calendars around early November, when they were first spotted last year.