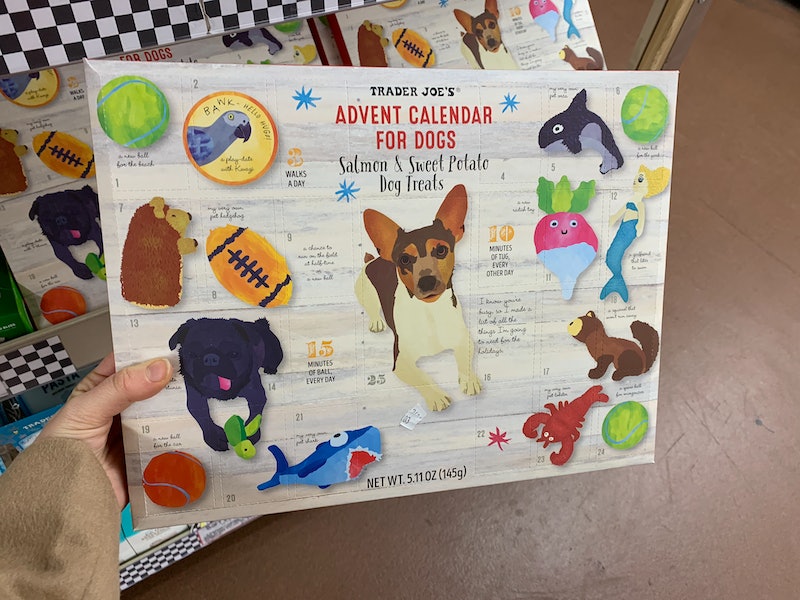 Advent calendars are truly having a moment in 2018, now that they are more inventive and more affordable than ever. While I've purchased more varieties of cheap food ones for myself than I care to publicly admit, now, as it turns out, it isn't just humans getting in on the fun: Trader Joe's advent calendar for dogs has officially hit stores, and it's so stinking cute that you're going to want to buy one not just for your pupper, but every single one on your block.

If you're keyed into all things that Joe happens to be trading, then perhaps you already heard tell of the advent calendars for dogs — in October, Trader Joe's employees revealed a bunch of upcoming holiday products on the podcast Inside Trader Joe's, and the pup-friendly calendar was among them. At the time, all we knew is that it would be a 24-day advent calendar with a dog treat for each day; now, though, they have been spotted on shelves by yours truly, where I promptly took a bajillion pictures with my iPhone in true keeping with my brand.

It turns out they're way cuter than you imagined — and surprisingly affordable, too. While they may be differently priced in other locations, the TJ's I visited in Manhattan was selling them for $5.99 apiece.

Per the box, the calendar is filled with salmon and sweet potato dog treats. Also per the box, these dogs may be having a way more luxe holiday season than you and your Reese's advent calendar. "These smoked salmon treats are made from salmon raised without antibiotics, from the cold waters of northern Scotland," the back of the box reads. "The salmon is combined with sweet potato and smoked over natural hardwood, creating a treat that dogs go crazy for!"

I also took a picture of the back of the box, if you're super into dog nutrition and cute shark animations.

This, though, is merely the beginning of Trader Joe's vast arsenal of holiday offerings; on the podcast, employees shared that the chain would be launching between 150 to 200 seasonal products for the holidays. Yesterday I went on a journalistic journey and took pictures of the holiday desserts that have already hit Trader Joe's this season, and can confirm that some of your favorite peppermint-flavored things are making a triumphant return. A few savory options have also hit shelves, namely in the turkey and stuffing genre, and this morning I definitely saw Joe roll out his very affordable fully-baked Pumpkin Pies in the baked goods aisle.

That being said, Trader Joe's is expected to drop way more seasonal offerings soon — among them include Bûche de Noël Ice Cream, Grain d'Orge cheese made with apple brandy, 10-, 13-, and 16-year-old scotches from Ardmore Distillery, per Inside Trader Joe's. Still, if you're looking to get your hands on those dog advent calendars, I'd move fast — people were very excited about these on social media when the news first hit, so I imagine these will sell out in the shake of a (well-fed) puppy's tail.