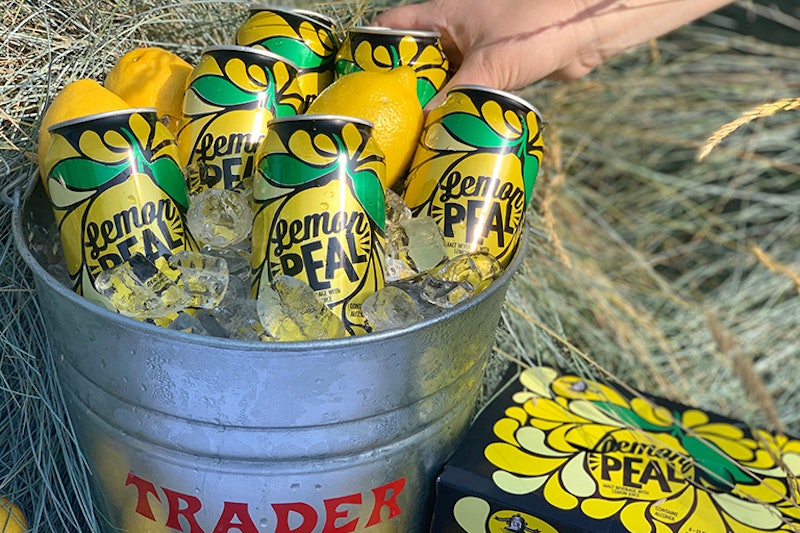 Hard lemonades may get a bad rap, but honestly, they’re one of my favorite things to drink during the summer, especially at barbecues and other outdoor parties. And hey, guess what? Now Trader Joe’s has their own version of this quintessential summer treat: Trader Joe’s Lemon Peal hard lemonade has just hit stores, according to the grocery chain's Dig In blog, and it’s sure to be a hit at your next seasonal shindig. With a cheerful-looking can and the sour-yet-sweet flavor hard lemonades are known for, Lemon Peal (yes, "Peal," not "Peel" — more on that in a minute) will brighten up any cooler or drinks table this summer.

Part of Campanology — the Trader Joe’s beer line which is, like many beer brands owned by grocery chains, probably handled by a contract brewery — Lemon Peal is what you might think of as a hard lemonade: It starts with a malt base, then adds fresh lemon juice, cane sugar, and a little bit of citric acid. The combination creates a fizzy, citrusy, boozy beverage that’s equal parts sweet and sour. The drink is available in 12-ounce cans sold as six packs for $7.99 (that comes out to about $1.33 per can).

At 5.7% ABV, Lemon Peal is a little stronger than other similar beverages on the market; by comparison, Mike’s Hard Lemonade is 5% ABV, while Garage Hard Lemonade and Smirnoff Ice clock in at just 4.6% and 4.5% ABV, respectively. However, it’s still within the range of most alcopops, which typically come in at somewhere between 4 and 6 or 7% ABV.

Hard lemonades like Lemon Peal are typically classified both as alcopops and malt beverages. A portmanteau of “alcohol” and “pop,” alcopops are essentially alcoholic sodas; they tend to be quite sweet, very fizzy, and often (although not always) brightly colored. They can have a wide variety of bases, including vodka and rum — but the malt-based ones have arguably gained the greatest popularity. The term “malt beverage” separates these kinds of drinks from beer; although both malt beverages and beer get their alcohol from malt, they’re as different in terms of flavor and presentation as apples and oranges.

(Interestingly, Mike’s started out with a vodka base, but moved to malt before it hit the U.S. market in 1999; meanwhile, Smirnoff Ice is malt-based in the United States, but vodka-based in some other countries — Australia, for example.)

The word “campanology,” by the way, refers to bell-ringing — or, more specifically, “the art or practice of bell-ringing,” as Trade Joe’s points out. According to the Dig In entry on Lemon Peal, the Campanology line’s name is “a nod to [Trader Joe’s] affinity for ringing bells.” Longtime customers are undoubtedly familiar with the bells positioned at each register in Trader Joe's stores; they operate in place of a PA system, with employees ringing their bells when they need something according to a predetermined code: One ring means another register needs to be opened; two rings means a customer at checkout has a question that needs answering; and three rings summons a manager. According to the Trader Joe’s FAQ, the bell system works better for the company than a standard PA system due to the fact that they’re easier to hear and less difficult to decipher.

That’s also why Lemon Peal’s name is Lemon Peal instead of Lemon Peel — it’s a play on words. I’ll give it to you, Trader Joe’s — that’s pretty clever.

Lemon Peal can be found at your friendly neighborhood Trader Joe’s this summer, although note that there’s a limited quantity of the stuff available; if you want it, you’ll need to act fast. Now, who’s ready to fire up the grill and get this backyard barbecue started?