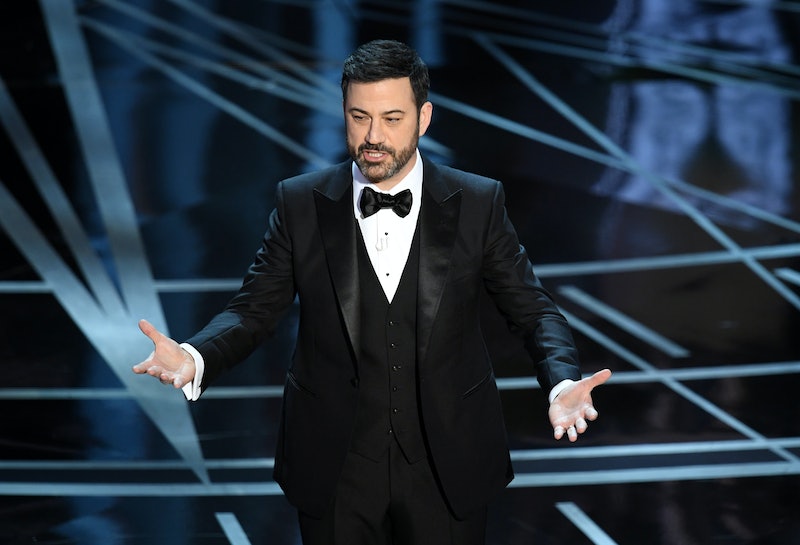 While there are always many things to look forward to during the Academy Awards, this year, one moment stood out above the rest. Given the current political climate and growing discussion around celebrities' involvement in politics, Jimmy Kimmel's 2017 Oscars monologue was highly anticipated. Would he make a political statement, kicking off the show on a more serious note? Would he stick to jokes about the nominees and attendees? Or would he combine the two? As this transcript of Jimmy Kimmel's Oscars monologue shows, the host actually decided to mix both ideas, with light-hearted commentary on the state of the U.S.

The monologue is always an important part of any awards show, because it dictates the tone of the night. For example, at the 2017 SAG Awards, there was no host, but Ashton Kutcher opened the show with a passionate speech about the immigration ban. The rest of the night followed suit, with many acceptance speeches focusing on President Trump's policies and the future of the United States.

As one of the biggest awards shows, there's an extra level of responsibility for the Academy Awards. The host needs to hook a large audience and keep them engaged for hours, but they also have an opportunity to speak about important issues on a very public platform. Kimmel started the night with a few easy jokes directed at Justin Timberlake, and from there, well, check out the transcript below.

"Congratulations to everyone who’s nominated tonight. Thank you for letting me be a part of this. I’m excited, I’ve never been to the Oscars before, this is my first time here, and the way you people go through hosts, this is probably my last time here. So I’m gonna enjoy this while I can.

This broadcast is being watched by millions of Americans and around the world by more than 225 countries that now hate us and I think that is an amazing thing. As you know, I don't have to tell anybody, the country is divided right now. I’ve been getting a lot of advice, people have been telling me it’s time to bring everyone together, you need to say something to unite us, and, let’s just get something straight off the top, I can't do that. There's only one Braveheart in their room and he's not gonna unite us either."

Kimmel was, of course, talking about Mel Gibson, and after the cameras cut to him, the host continued:

"Mel, you look great, I think the Scientology is working I really do.

I’m not the person to unite this country, but it can be done. … I don't want to get too serious, but there are millions and millions of people watching right now and if every one of you took a minute to reach out to one person you disagree with, someone you like, and have one positive, considerate conversation, not as liberals or conservatives, but as Americans, if we could all do that we could make America great again. It starts with us."

After that more serious message, Kimmel shifted tones by reaching out to someone he personally has issues with, Matt Damon, and as you'd expect, the "healing" quickly turned to mocking.

"And tonight in the spirit of healing and bringing people together, I would like to bury the hatchet with someone I’ve had issues with, Matt Damon. I’ve known Matt for a long time now. I’ve known Matt for so long, when I first met Matt, I was the fat one. That’s true. And we’ve had problems.

He’s a selfish person, those of you who have worked with him know this. But Matt did something very un-selfish and I wanna commend him for it, for real. Matt, as you probably know, could have starred in Manchester by the Sea, he was the producer, it’s nominated for six Oscars including Lead Actor, and he could have taken that lead actor part for himself, but he didn’t. He gave that role to Casey Affleck, his childhood friend.

He handed what turned out to be an Oscar-caliber role over to his friend, and made a Chinese ponytail movie instead. And that movie, The Great Wall, went on to lose $80 million. Smooth move, dumbass.

From there, Kimmel turned his attention to the actual movies.

"See, it’s so easy to reach out and heal. Maybe this isn’t a popular thing to say, but I want to say thank you to President Trump. Remember last year when it seemed like the Oscars were racist? That's gone, thanks to him.

It has been an amazing year for movies. Black people saved NASA and white people saved jazz, that’s what you call progress. A little movie musical called La La Land ties the all-time Oscar record, it was directed by Damien Chazelle, 14 nominations. 14 nominations, one for every year Damien has been alive. Tonight is very important for Damien, if he wins he’ll get to go to any college he wants, so we wish you the best."

But La La Land wasn't Kimmel's only target and he next turned to Manchester by the Sea.

"The movie business is changing. For the first time ever, Amazon is represented at the Academy Awards. Amazon is the first streaming service nominated for Best Picture. Jeff Bezos is the founder and CEO and I want to say congratulations to Jeff.

Jeff, I also want you to know if you win tonight, you can expect your Oscar to arrive in 2-5 business days, possibly stolen by a GrubHub delivery man.

The next targets were Moonlight and Fences, well, more Denzel Washington than the actual movie for the latter.

"I don’t know what’s going on but there are a lot of sad movies this year. The only happy ending of all the nominees was the one in the middle of Moonlight. You didn’t watch it did you? ‘Oh we love it so much.’

The incredible Denzel Washington is nominated for Fences, a movie he also directed. I don't know but you probably already heard the story, but apparently Denzel always wanted to work with Denzel, and it just so happened that their schedules worked out and the rest is Oscar history, congratulations to you my friend."

After that came Elle and Silence, with a side of political commentary and a dig at Hollywood sexism.

"We have colleagues and friends from all around the world tonight. The great actress from France, Isabelle Huppert, is here with us. Isabelle, as you know, is nominated for her performance in the movie Elle, and on behalf on everyone here I’d like to say, we didn’t see Elle but we absolutely loved it. You were amazing in that film and I’m glad Homeland Security let you in tonight. I really am.

Andrew Garfield lost 40 pounds, where is Andrew Garfield? You could barely even see him he got so thin. There he is. He lost 40 pounds for his role in the movie Silence. It was an astonishing physical transformation that hasn't been attempted since every actress in every role ever."

After a brief joke about no one seeing Captain Fantastic, Kimmel got a bit political again, referencing Donald Trump's comments about nominee Meryl Streep being overrated. You can also see his monologue in the video below.

"We are here tonight to honor great actors, but we’re also here to honor the actors who seem great, but actually really aren’t. And of all the ‘great’ actors here in Hollywood, one in particular has stood the test time for her many underwhelming and overrated performances.

May I say from her mediocre early work in Deer Hunter and Out of Africa to her underwhelming performances in Kramer vs. Kramer and Sophie’s Choice, Meryl Streep has phoned it in for more than 50 films over the course of her lackluster career.

This is Meryl’s 20th Oscar nomination. Even more amazing considering the fact that she wasn't even in a movie this year, we just wrote her name down out of habit.

And to wrap things up, Kimmel took one more dig at the president.

"I know we’ve all seen it all, but I think it’s important that we all take a second to appreciate what is happening here, we’re at the Oscars. The Academy Awards. You’re nominated. You got to come. Your family is nominated, your friends.

Some of you will get to come up on this stage tonight and give a speech that the president of the United States will tweet about in all caps during his 5 a.m. bowel movement tomorrow. And I think that’s pretty darn excellent if you ask me, so let’s get going."

If rest of the Oscars follow Kimmel's example, they'll be a great blend of humor, political commentary, and jabs at the nominees.