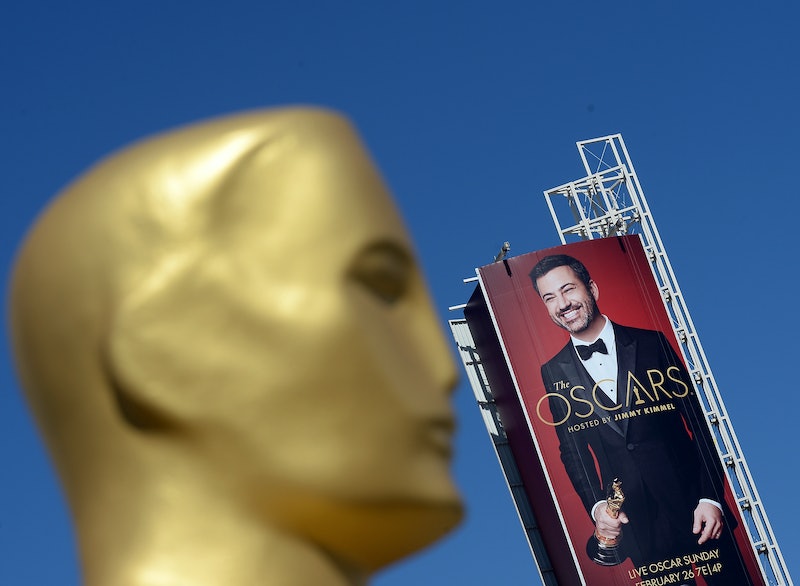 The exact running time of the Academy Awards is always an enigma. For the 2017 ceremony, E! is starting red carpet coverage as early as 1:30 p.m. ET and the website for the Oscars tells you to start watching ABC at 7:00 p.m. However, the actual start time of the Oscar ceremony is 8:30 p.m on the East Coast since the live show kicks off at 5:30 p.m. in Los Angeles. With all of these competing times, how long the Oscars are supposed to be can be a bit confusing. Your cable provider (if you've got one of those) probably has the awards show scheduled until 11:30 p.m., but history indicates that the Oscars will most likely run longer than a mere three hours when they air on ABC on Sunday, Feb. 26.

While three hours is a longer runtime than any of the nine movies nominated for Best Picture and sounds like plenty of time to wrap up an awards show, the truth is it's unrealistic to think the Oscars will finish promptly at its scheduled end time of 11:30. And that's because of how the Oscars have historically gone down. For example, in anticipation of the 2012 Oscars, Slate created a graph of every Oscars runtime and the ceremony had not been three hours or under since the 1980s.

With the 2017 Oscars officially starting at 8:30 p.m., you'll be lucky if they end before midnight if you live on the East Coast. If you're on the West Coast or even in the middle of the country, it should hopefully not be as big of an issue if the show starts creeping past the three and a half hour mark since you'll still be able to get more sleep before work on Monday morning than East Coasters. No matter where you live though, if you're trying to figure out just how long you will be up on Sunday, Feb. 26, I can't give you a great estimate since Jimmy Kimmel has never hosted the Oscars before. That means there is no precedent for how long an Academy Awards ceremony hosted by him will go on for. Yet, let's be real — it's usually not the host that causes the show to run so long anyway.

Even with playoff music, the award recipients' speeches are a big reason for why the show lasts longer than scheduled. The producers of the show had tried changing that in 2016 when the Academy introduced a thank-you scroll at the bottom of the screen. The nominees were asked to submit the names of the people they wanted to thank ahead of time to trim down the length of the speeches. Opinions varied with some thinking the thank-you scroll was an improvement and others thinking the thank-you ticker was just plain awkward since most of the winners understandably thanked who they wanted to thank in their speeches anyway.

I couldn't find evidence of the thank-you ticker being reintroduced for the 2017 Oscars, so perhaps the Academy Awards regarded it as a failed experiment. After all, the show still ran over three and a half hours even with that addition. That means, thank-you scroll or not, you shouldn't expect the acceptance speeches for 2017 to be any shorter than in previous years. Actually, I am preparing for them to be longer considering the current political climate will probably lead to one of the most politically-charged Oscars in history.

However, I don't mean to blame the winners alone for a long runtime since not only are they the whole reason for the awards ceremony to exist, but also because there are other factors to consider. The in memoriam should certainly run long to pay tribute to all the talented people the world lost last year. And the performers for the 2017 Oscars include Justin Timberlake, John Legend, and Lin-Manuel Miranda and it would be a travesty to rush those artists off the stage.

So, while the Academy Awards may attempt to change up the ceremony each year to shorten it, unless there is a massive overhaul, the show will just inevitably continue to run over three hours long. Because even though anything can happen on live TV, the one thing that never seems to happen is the Oscars finishing up on time.