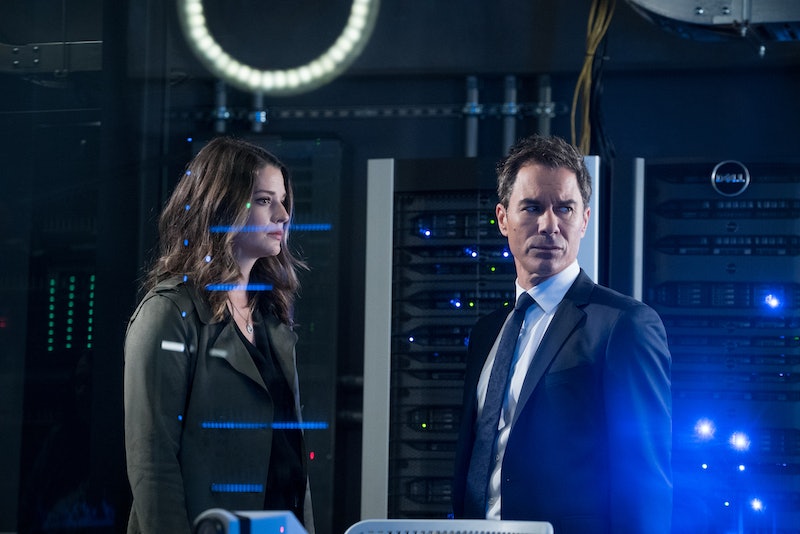 After a game-changing Season 3 finale, the travelers from the future in Travelers won't be trying to save humanity in the 21st anymore. Star and producer Eric McCormack announced on Twitter on Friday, Feb. 1 that Travelers won't return for a Season 4. The Canadian sci-fi series was already given a second life by Netflix for Season 3, which was the first season to not to air on the Canadian channel Showcase. But the show wasn't picked up for a Season 4 by the streaming site. And while you can still see McCormack on TV weekly in the revived Will & Grace, that's probably no real consolation for Travelers fans.

Although the first two seasons of Travelers aired on Showcase in Canada, Netflix joined forces with the Canadian station to stream the show everywhere else outside of the Great White North in 2016. And after Season 2 premiered on the streaming service, Netflix named Travelers one of the top 10 "shows we devoured" (where people watched for more than two hours a day) in 2017. But, as McCormack made clear in his video statement on Twitter, there won't be any new episodes of Travelers for now.

"A lot of you have been asking about the possibility of a Season 4," McCormack said. "But many of you have been saying, 'Look, if this is it, what a moving and surprising and profound ending it is.' Well, I'm afraid, it is. Who knows what the future holds, but Travelers Program 1 as we called it, is over."

McCormack knows a thing or two about revivals. His beloved NBC sitcom Will & Grace was resurrected after more than a decade after it originally went off the air. So McCormack did maintain some hope in his statement about Travelers when he said, "Who knows what the future holds." (Except, you know, the travelers did know what the future held.) Yet, he also pointed out how the Season 3 finale, "Operation Omega," was a pretty satisfying conclusion. When Season 3 dropped on Dec. 14, 2018, fans on Reddit noted that the episode almost seemed like a series finale with the Travelers Program Version 1 failing and the Travelers Program Version 2 set to begin. And it turns out, that "Operation Omega" will have to serve as the finale for Travelers.

Although the Season 3 finale was a major reset, that doesn't necessarily mean fans have accepted the end of Travelers. After all, viewers have been following travelers from the future in the host bodies of Marcy (MacKenzie Porter), Carly (Nesta Cooper), Trevor (Jared Abrahamson), and Philip (Reilly Dolman) led by McCormack's Grant MacLaren for three seasons as they attempted to save the world. Since they didn't succeed as intended, there were plenty of new directions the story could have gone in for a Season 4 and fans were not pleased with the cancelation on Twitter.

Fans were angry at Netflix, but the show's creator, Brad Wright — who also co-created Stargate SG-1, Stargate Atlantis, and Stargate Universe — thanked the company "for stepping up so we could make season 3!" Yet, that's not enough to appease the passionate fanbase. So just like with another canceled sci-fi show, Timeless, people are trying to save the show. A petition has already been created and fans are using hashtags like #SaveTravelers and #RenewTravelers.

If Travelers has taught fans anything, it's that there's always a chance to change the future. So perhaps one day the world will see what Traveler Program Version 2 is all about. But until then, it's up to the people of the 21st to save themselves with no help from the travelers of the future.