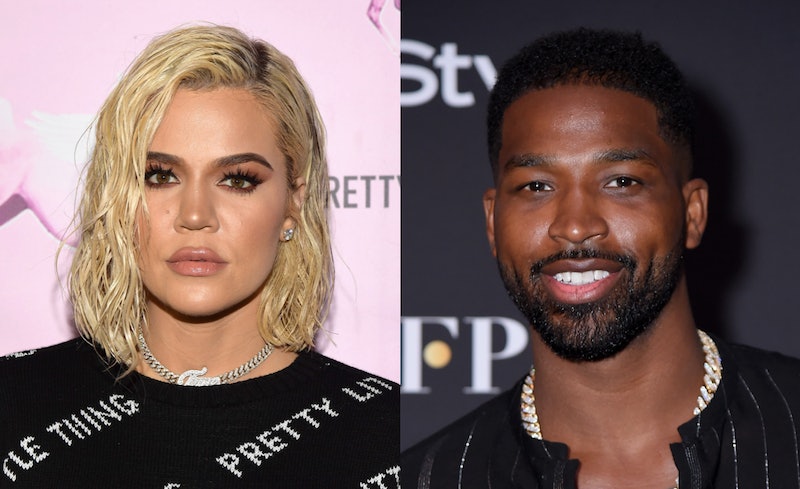 After everything that they've been through, could Tristan Thompson and Khloé Kardashian finally be in an alright place behind-the-scenes? Well, despite all of the drama, Tristan Thompson wished Khloé Kardashian a happy birthday on June 27. And while the timing of his post may be a bit awkward, considering that the whole cheating scandal is unfolding on Keeping Up With the Kardashians at the moment, it could simply be a sign that the former couple is on positive terms with one another, particularly for the sake of baby True.

The Cleveland Cavaliers posted a rather kind message for his ex-girlfriend on Instagram. On the social media site, he posted a photo of Kardashian and their daughter, True Thompson, which he captioned,

"Happy birthday @khloekardashian You are the most beautiful human I have ever met inside and out. Thank you for being an amazing mommy to our princess True. She is blessed to have someone like you to look up to. I wish you nothing but more success and sending you positive blessing your way. Enjoy your day Koko ❤️"

It should be noted that while Kardashian has not yet replied to his birthday message, she did like his post.

If you're a fan of the famous family, you'd know that the cheating scandal involving Thompson, Kardashian, and Jordyn Woods is currently playing out on KUWTK (just as a refresher, TMZ reported in February that Thompson and Kardashian had split because the athlete supposedly cheating on his girlfriend with Kylie Jenner's then-BFF. Woods would later claim on Red Table Talk that nothing intimate occurred between them). Considering that the drama is taking center stage at the moment, it's certainly a little awkward to see Thompson send such a kind and personable message his ex's way.

Even though there may be some awkwardness surrounding the timing of the post, Thompson's kind words do indicate that he and Kardashian's relationship is on a positive track. In the past, the Revenge Body star has even related that they want to be on good terms with one another for the sake of their co-parenting relationship.

In May, Kardashian appeared on the Divorce Sucks! podcast to discuss how she feels about co-parenting with Thompson. On the show, she mentioned that it is difficult to co-parent with her ex, even going so far as to say that the situation does "f*cking suck" at times because of the emotions involved. But, she's determined to move past it so that she can create a positive environment for her daughter. She said,

“So those emotions can be heightened at times, but I do everything in my power — True is one and, like, a month old — so she doesn’t really know what’s happening, but to me she does know and she feels energy and I’m a big believer of that."

Kardashian had something similar to say recently in an interview with Entertainment Tonight. During the interview, which was published on June 27, the reality star said, in regards to the cheating scandal, that she doesn't want anyone to send any hatred toward Thompson or Woods after watching the drama unfold on KUWTK.

"I don't think there needs to be negativity anywhere," Kardashian said, "I think it's just a story being told, but anybody picking a side or... condemning any human, I think this is a part of life. I'm not saying it's a good part." Basically, she's determined to keep things positive, even if this situation is far from it.

Between Kardashian's positive attitude when it comes to their co-parenting relationship with her ex and Thompson's recent birthday post, it seems as though the former couple may actually be on OK terms at the moment, which, after that messy cheating scandal, is all that one can really hope for.