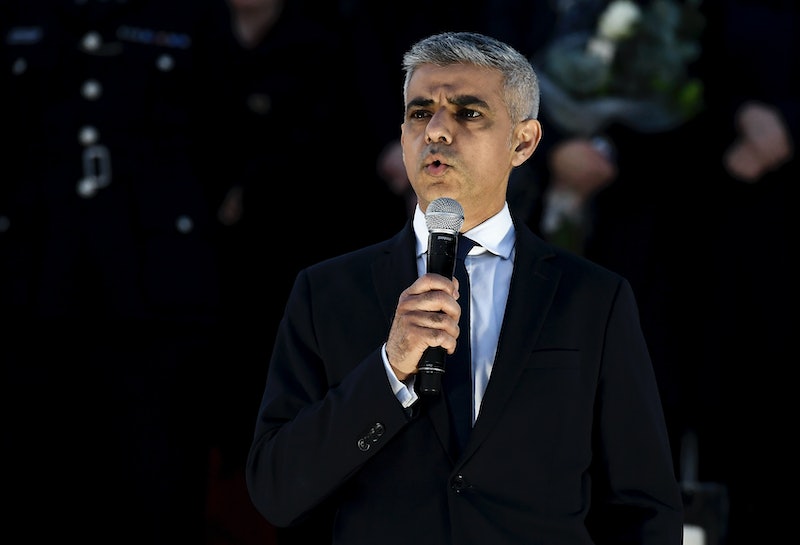 London and the U.K. might be doing their best to move on from the terror attacks that took place there on Saturday night, but the American president seems to be stuck in his initial reaction. Donald Trump tweeted a new attack on Sadiq Khan, the mayor of London; this time, his tweet read:

Pathetic excuse by London Mayor Sadiq Khan who had to think fast on his "no reason to be alarmed" statement. MSM is working hard to sell it!

Trump was referring to the statement that Khan released about the attacks on Saturday night, in which he issued his condolences and a message of defiance in the face of such cowardly violence. As part of the statement, he said that the city was responding to the attacks with an enhanced police presence, but that "there is no reason to be alarmed by this" — referring specifically to the increased police presence.

Trump, however, seemed to take those words out of context in his first tweet attacking Khan on Sunday, in which he said "At least 7 dead and 48 wounded in terror attack and Mayor of London says there is 'no reason to be alarmed!'" That tweet drew a lot of criticism, including a rebuke from British Prime Minister Theresa May.

However, this latest tweet, which includes a more personal attack on Khan, only makes the situation worse.

Let's just take a moment to recognize exactly what Trump is doing with this tweet: A major world capital with close ties to the U.S. just suffered a terrorist attack, and its mayor responded with a fitting and eloquent statement to his citizens; the U.S. president, instead of backing the mayor up, has now lashed out at him twice, implying that the mayor's response has been somehow inadequate. In addition to that senseless criticism, the president has also repeatedly used the incident as an excuse to tweet in support of his controversial travel ban executive order, which several federal courts have already ruled against.

Trump's response is a true embarrassment for the U.S. for so many reasons, starting from the fact that it hinges on a total misreading of the comment in question. If you take 30 seconds to read Khan's statement, it's clear that he's saying that people should not be alarmed by seeing armed policemen in the streets of London. Trump, however, immediately assumed that Khan was saying that people had no reason to be alarmed about the terror attack — and now this second tweet, a day later, not only reinforces that, but then additionally blames the mainstream media for somehow attempting to sell a feeling of calm.

Blatant disregard for facts is nothing new to Trump, though, so perhaps this is just par for the course. The far more disturbing aspect is his lack of concern for and support of a close American ally, and the fact that he would try to deliberately twist the news of a terrorist attack for his own political gain. Khan said on Sunday that he wouldn't respond to Trump's first tweet, a decision which ostensibly still stands today with regards to Trump's latest tweet.

Many have deliberated about the danger that comes from Trump having access to the nuclear codes, and that is absolutely still a terrifying thought. With reckless responses like this to America's greatest allies, though, Trump proves just as solidly that he is completely unfit to lead a nation, much less one of the most powerful nations on Earth. Khan is absolutely right to ignore him, just as May is right to criticize him — in fact, she could have come out to say it more strongly.

Trump will no doubt fail to learn anything from this ordeal, however, and it's becoming more and more clear that every day he spends in office is putting the American people at a greater disadvantage in the world.