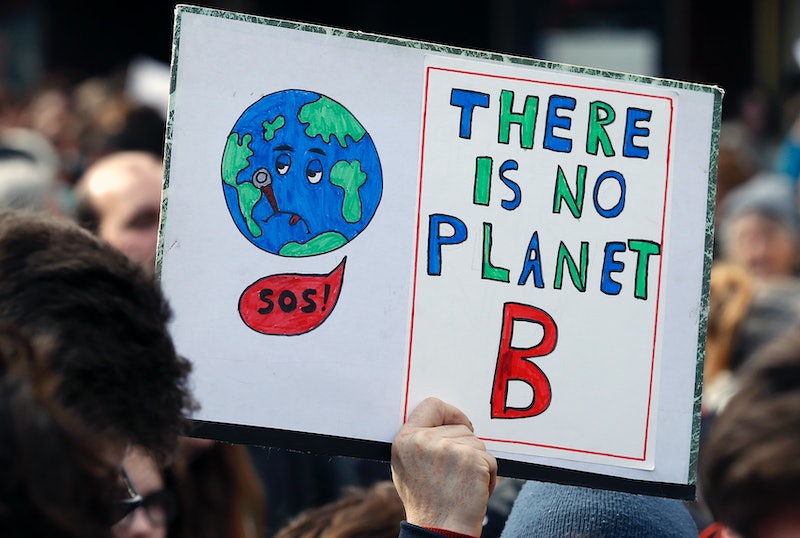 On Monday, the Trump administration announced it had begun the process of withdrawing from the Paris Agreement. However, the official exit won't happen for another year — and that's right around the time of the next presidential election. So if you're concerned about Trump's Paris climate deal withdrawal, remember the 2020 election is all the more important for one additional reason: the next president could decide to rejoin the international climate agreement.

Secretary of State Mike Pompeo's Tuesday announcement might be confusing, given that Trump declared his intentions to withdraw the U.S. from the Paris Agreement over two years ago. But there's a simple reason for this delay: per CNN, Monday marked the earliest day within the framework of the agreement that a country could formally begin to withdraw. What's more, the process will not be complete until Nov. 4, 2020, exactly one year after the announcement.

That being said, it's worth keeping in mind that the agreement was non-binding to begin with. The Trump administration has completely ignored the parameters of the Paris Agreement for the last two years, even though the country has technically still been a part of it — and the administration can continue to ignore those parameters for the next year. But there's a silver lining for those in favor of aggressive action against climate change: after the United States exits the Paris Agreement officially, it can quickly rejoin, if it has a president willing to do so.

According to the terms of the deal, as laid out by The Washington Post, the next president could elect to re-enter the U.S. into the Paris Agreement by submitting a formal document. Thirty days after that, the U.S. would be re-admitted. So if another presidential candidate was elected and chose to submit a formal document of re-entry on his or her first day of office, the United States could rejoin the deal a month into the new presidency. And your vote in the 2020 general election could help make that happen. Of course, POTUS has the power to do this, too — but he's never given any indication of wanting to backtrack

According to a Washington Post breakdown of where all of the Democratic presidential candidates stand on the Paris Agreement, every candidate in the running has stated they would rejoin if elected as president. You can read each of their specific (or not-so-specific) plans regarding the Paris Agreement to get a better idea of what they've said on the topic. You can also learn more about their climate policies beyond the Paris Agreement, via the Natural Resources Defense Council.

Above all, if you want the United States to rejoin the deal, urge presidential candidates to offer fast-acting, wide-reaching climate initiatives, and to be clear about how they plan to prioritize them. You can also declare an intention to only vote for candidates who plan to immediately re-enter the Paris Agreement, if you so choose.

More like this
Watch Jacinda Arden’s Devastatingly Honest Resignation Speech
By Sam Ramsden
What The UK Blocking Scotland’s Gender Recognition Bill Means
By Sam Ramsden
The UK Government Is *Finally* Banning Conversion Therapy
By Sophie McEvoy
6 Organizations Fighting Police Brutality That You Can Support Right Now
By Syeda Khaula Saad and JR Thorpe
Get Even More From Bustle — Sign Up For The Newsletter
From hair trends to relationship advice, our daily newsletter has everything you need to sound like a person who’s on TikTok, even if you aren’t.