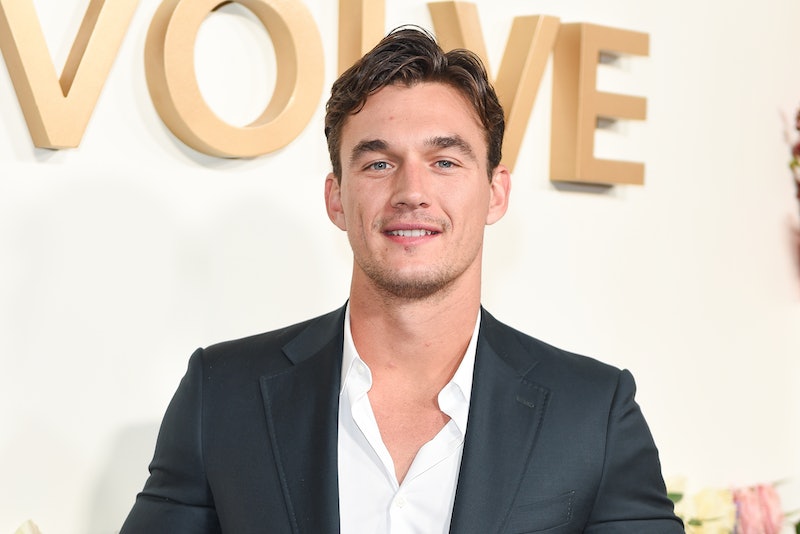 Nearly three months after her sudden death, Tyler Cameron celebrated his late mother's birthday with a tribute on social media, featuring his brothers, Ryan and Austin. "Happy birthday momma," Tyler wrote on Instagram, alongside a photo of the three boys flanking their mother, Andrea, at what looks like a family event. "We miss you."

Several members of Bachelor Nation — including Tyler's costars, John Paul Jones and Mike Johnson and former Bachelorette Rachel Lindsay — commented on Tyler's post to share their love with the Florida native. In early March, the Palm Beach Post reported that Andrea had died after a brain aneurysm at the age of 55. "She was super supportive," Tyler told the outlet about his mother's reaction to his decision to compete on The Bachelorette. "But what was so amazing ... she was supportive for [Hannah Brown] and everyone else who was a part of that show but she was also supportive to the random fans."

On March 2, Tyler paid tribute to Andrea on Instagram, with a touching post encouraging his followers to reach out to their loved ones before it's too late. "Today heaven gained an angel. We will love and miss our mother dearly," he wrote, alongside a photo of himself, Ryan, and Austin holding Andrea's hand in the hospital. "She will live on through us and through those that she has had an impact on."

He continued, "While we grieve, we ask for two things: First, tell those you love that you love them; and second, please let us take this time to celebrate her life in private." Tyler concluded his post by thanking his fans and followers "for all of your love and support" after the news broke.

Since then, Tyler has continued to honor his mother and the close relationship he shared with her on social media. On March 10, for Mother's Day, he shared a throwback photo of Andrea supporting him from the sidelines of a football game. "Always had my back," Tyler captioned the post, along with several heart emojis. "Still do."

As difficult as the grieving process has been for Tyler, he told E!'s The Rundown in early May that his focus has been on supporting his family though this tough time. "My main goal right now is focusing on my little brothers, taking care of them and getting them where they need to be," he explained. "I know I'll be able to get through all this, but my youngest brother… He's 20-years-old. He's a baby." As a result, Tyler stated that despite any rumors about rekindling his romance with Hannah Brown, he's not ready to date at the moment. "I've had a lot going on in my life lately," he said. "My mom passed. We have this whole quarantine going on, so who the heck can date right now?"

Instead, Tyler is finding comfort from another lady in his life: his beloved dog, Harley. "When I was in New York this past year, I had to give [Harley] to my mom to take care of. And then my mom passed. Today, [Harley and I are] inseparable," Tyler told Bustle recently. "Me and Harley are together again always, and it feels like I have a little piece of my mom. ... It's the best thing ever." Even though Andrea may no longer be with her family, it's clear that she will always be with Tyler.