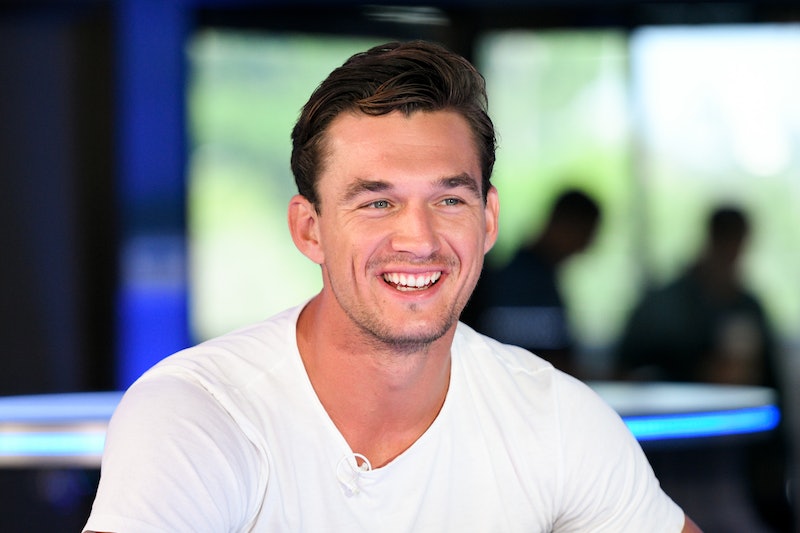 Despite all of those rumors about rekindling his relationship with Hannah Brown, Bachelor Nation's most eligible man isn't dating at the moment. During a recent interview with E!'s The Rundown, Tyler Cameron revealed he's not interested in dating right now — and not just because the world is currently practicing social distancing due to the coronavirus pandemic.

"I am dating nobody right now," Tyler said. "I've had a lot going on in my life lately. My mom passed. We have this whole quarantine going on, so who the heck can date right now?" In late February, Tyler's mother Andrea suffered a brain aneurysm and died at just 55-years-old, and in the months since, the contractor and former reality star has been focused on taking care of his younger brothers, Ryan and Austin.

"My main goal right now is focusing on my little brothers, taking care of them and getting them where they need to be," he explained. "I know I'll be able to get through all this, but my youngest brother… He's 20-years-old. He's a baby." In addition to spending time with his family, Tyler also said that he needs to focus on his own happiness before he can think about starting a new relationship with someone.

"Right now I need to make myself happy," Tyler said. "I need to take care of myself, take care of my brothers and then once I feel like I'm in a [good] place hopefully I can find someone that can make help me happy and I can help make them happy."

Tyler's comments come after months of rumors that he and former Bachelorette Hannah Brown had reconciled, after the beauty queen travelled to Florida in order to attend a memorial service for Andrea, and to support Tyler and his family after her death. After briefly returning to Alabama, Hannah spent the month of March quarantined with Tyler and his friends in his hometown of Jupiter, Florida. Despite posting plenty of flirty videos on Instagram and TikTok, the pair have both repeatedly denied that they are anything more than friends.

In late March, Tyler joked during a workout with his friend, Jacob Latham that "me and Brown Bear are dating, yes, I confirm," referring to Latham's nickname, and not long afterwards, he told a group of Bachelor fans that Hannah is just "a good friend" of his. On April 14, the Alabama native shut down dating rumors herself during an Instagram Live Q&A when fans asked if she had any plans to start a family.

"You have to have a significant other for that, and I don't," she said at the time. In May, Hannah told fans that she was ready to start dating again, but wanted to wait until it was the "right" situation. "I definitely want to be in a relationship," she explained. "I’m gonna be single until it’s right. I don’t date around, really. You have to date people, but I date, like, seriously. As for whether or not Tyler will end up being that "right" person, well, Bachelor Nation will just have to wait and see.