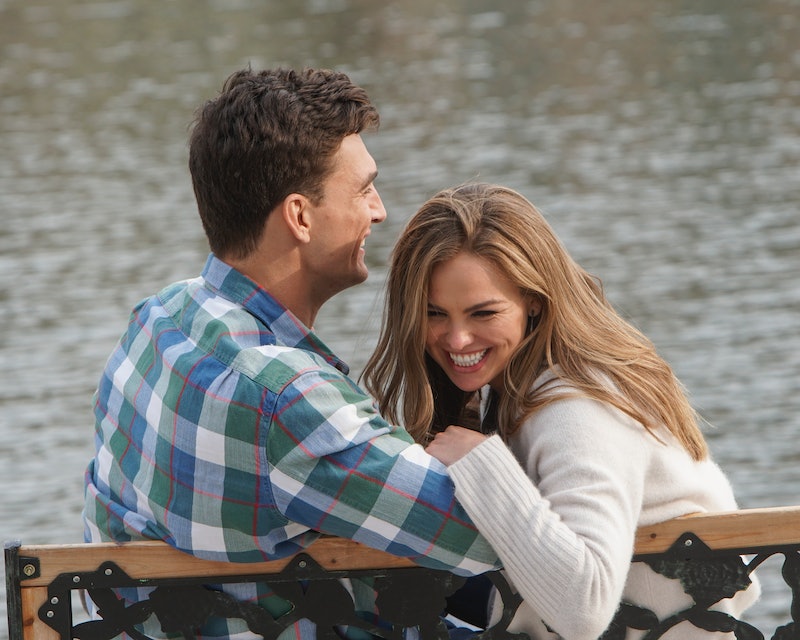 On the heels of Hannah's Fantasy Suite Week episode, Bachelorette contestant Tyler C.'s windmill tweet is keeping the rumor mill spinning. Proving that a picture is truly worth (at least) a thousand words, on July 17, the Bachelorette finalist posted a captionless photo of himself at New York City's Museum of Sex. The piece de resistance: Tyler C., who posed next to a sign bearing the museum's name in the photo, later placed a windmill GIF on the ledge next to him, before sharing the animated post.

Of course the ABC reality dating competition answered the long-pondered question of who Hannah "f*cked in a windmill (twice) while in Greece. As it turned out, Pilot Pete was the one who planned the overnight in a windmill, not Tyler C. That certainly hasn't stopped the Jupiter, Florida-born contractor from poking fun at the situation though.

Prior to sharing the latest image, Tyler C. appeared in a cheekily captioned photo with Bachelor Nation vet Nick Viall. "Just had lunch in a windmill," Viall wrote along with the July 10 pic.

Not to be outdone, Hannah added a hilarious comment below the photo: "Ahh yes, I highly recommend the windmill; it’s a great place for a mid-day snack."

After Nick replied to Hannah with "the dessert was really great," Tyler C. added, "nothing like some whip cream and a cherry on top."

Hannah initially made the windmill confession to Luke P., who said he'd "completely remove himself" from their relationship if he found out she'd had sex with any of the other contestants.

"My husband would never say what you've said to me," she replied. "I have had sex and, honestly, Jesus still loves me. ... From obviously how you feel, me f*cking in a windmill, you probably wanna leave."

Ever since the now-famous line appeared in an early promo, Bachelor Nation has been abuzz over Hannah's candor. During a July 9 appearance on Strahan and Sarah, former Bachelorette Rachel Lindsay weighed in on the windmill situation.

"I was surprised she was so bold and forthcoming with it, but I mean, she owns it, so I mean, more power to her," Rachel commented. "Are we surprised? We’ve seen her in hot tubs, on beds, massage tables. It was coming, right? Why not a windmill?"

Even Hannah's ex, former Bachelor Colton Underwood, addressed her windmill quote. "I say what the fence was to me, the windmill is to Hannah" Colton joked to Entertainment Tonight on July 11. "But talk about a bomb getting dropped! I'm here for all of it! I know it's sort of polar opposite of what my take on my season was, but I think that's what's so cool about the Bachelor franchise, is everybody has their own twists to things."

After the episode aired, even Hannah herself talked about her windmill revelation. As she told The Hollywood Reporter: "I never planned for it to be known by the world, but if you say it with a mic on then you’ve got to own it, and I’m going to own it. To the windmill, to the wall."

It seems that almost everybody has a sense of humor about the windmill situation — except maybe Luke P., of course.