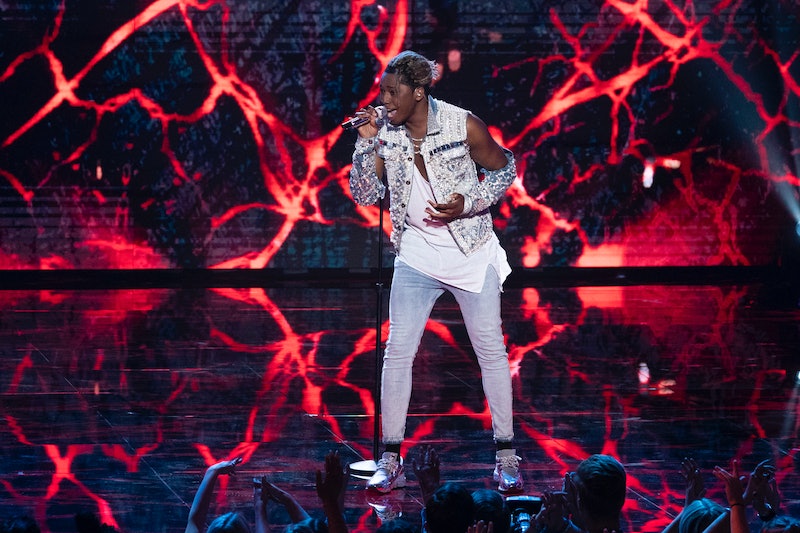 The top 10 contestants on American Idol Season 2 have officially been revealed. Seven of them were voted through by viewers, and the other three were saved by the judges, including Idol contestant Uché Ndubizu. So far, the 24-year-old has wowed the judges and fans across the country with his electric stage presence and contagious energy, which makes it surprising that he had to sing for his life in order to remain in the competition.

"We are not in the singing business. We are in the entertainment business,” Lionel said after leaving his seat at the judges' panel to hug Ndubizu onstage. "And I'm going to tell you something, you'll never touch as many people as you've touched. You are a performer. A lot of people can sing. Very few can sing and perform. This is an entertainer!" Then, before the crew could cut to commercial break, Richie promptly walked Ndubizu to the safety zone to join the other contestants.

For his Top 14 performance — the first to be judged by America —Ndubizu performed "Finesse" by Bruno Mars and had no trouble channeling the artist. His dance moves and charisma throughout the number led Katy Perry to fall faint, while last season's Idol winner, Maddie Poppe said people were "dumb" if they didn't tune in to watch him. She was shocked to find out he was up for elimination.

"My heart freaking broke for @UcheSings when he was talking about how he gave it his all last night," Poppe tweeted. "This guy deserves to go all the way. So talented, such an amazing performer. America is dumb if they don’t wanna watch this every week."

In a post-show interview with Access Live, Ndubizu expressed the roller coaster of emotions he felt when realizing he was staying in the competition. "I don't even know, I don't have words anymore... I was trippin' like, I didn't even know what to think," he said. "I don't like to have emotions, you know, but they happen. And I'm honestly just so glad that Lionel said yes. At the end of the day that's all that matters." He also talked about how, compared to his competitors, he has a smaller social media following, which he thinks had something to do with the lack of votes he received.

Now, thanks to Richie, America will have another chance to send Ndubizu to the top. The Top 10 are off to embrace their Disney magic on Sunday, April 21, and Ndubizu may have an advantage there against his competitors, considering that he's rubbed elbows with a few former Disney stars in the past. In 2013, he was the winner of the Acuvue 1-Day Contest and was mentored by Joe Jonas to release his first single, "Shoo Fly," along with a music video. And according to his official website, he has also opened for Demi Lovato.

In 2017, he released an EP called My Generation, which is described on his website as "a musical biopic chronicling [his] descent into a world of self-indulgence fueled by excessive drug use" that was then "followed by a spiritual awakening."

It's obvious that Ndubizu has established the resume and garnered the experience necessary to become the legend he wants to be. America just needs to give him the chance to do it.