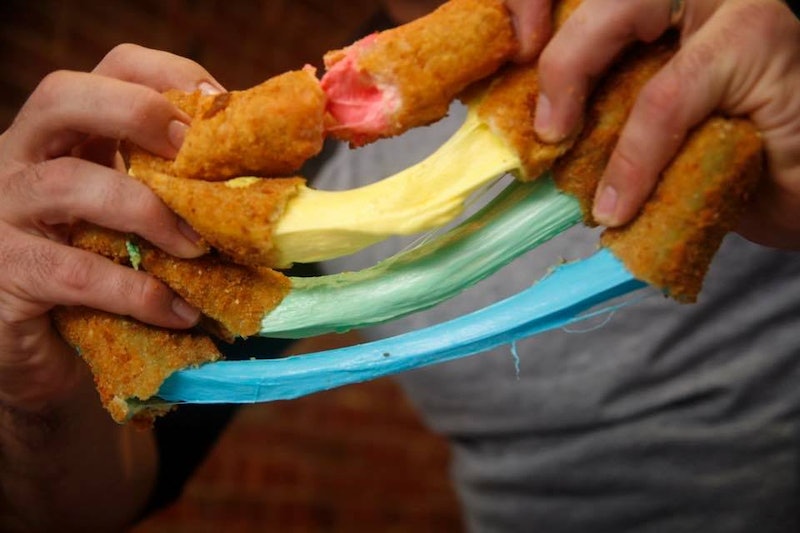 Unicorn tears, unicorn poop... the craze hasn't let up. It's taken every industry by storm, resulting in unicorn hair, makeup, milkshakes, hot chocolate, and the flavor-changing unicorn Starbucks Frappuccinos — just to name a few. A brand new one just hit the scene, too: unicorn blood mozzarella sticks, and they're going to make your heart squeal with glee. Fried food has never looked this good.

The colorful creation comes out of Hoboken, New Jersey, from a pizzeria named Tony Boloney's. If the place sounds familiar, it's probably because they went viral earlier this year thanks to their epic taco pizza. (More on that later.) Also, their name is fun to say. Because they weren't ready to stop at taco pizza, they've gone and thought up unicorn blood mozzarella sticks — because tears and poop, in the words of Hilary Duff, are so yesterday.

To accomplish this amazing feat of cheesery, they add food coloring to their house made mozzarella, dip the vibrant chunks o' cheese in an egg-flour-breadcrumb mixture, and fry them into another dimension. The result is a cheesy rainbow masterpiece that's probably equally as delicious as it is Instagram-worthy. And if we're being honest with ourselves, we mainly order food like this because it's more photogenic than most humans. Feast your eyes upon unicorn blood mozzarella sticks. Are they not a ray of sunshine on the cloudy storm that is your life?

Ordinary cheese sticks will never be the same. RIP.

Tony Boloney's is no stranger to cooking with color. Their beet horseradish sauce has turned many an ordinary dish into works of art. Behold this romantic heart pizza that's sure to bring life even to the blackest of souls.

Then there are these fries that are so purply and orgasmic that we can't look at this picture for too long because we might faint.

And then there was this fabulous pizza creation that stunned us with its magical beauty while also supporting a good cause.

Last but certainly not least is the pizza that started it all: the taco pizza. Is it tacos? Is it pizza? Who knows? And yes, that appears to be a giant blob of guac in the middle. This will go down in history books as the pizza that made the earth stand still.

Rainbow and unicorn food hit us pretty hard, making us look at ordinary pizza and fries and cheese — in all its dull colorlessness — and think, "...Why." After being exposed to the likes of rainbow grilled cheese, bagels, doughnuts, and spaghetti, food in its natural, normal, artificial dye-free state just doesn't seem to cut it anymore. Why have a regular bagel when you could have this rainbow masterpiece complete with funfetti shmear? I'm pretty sure sprinkles make everything better.

The colorful rainbow and unicorn food trends don't seem to be dying down anytime soon, as people continue to find ways to add bursts of color to otherwise mundane food items. (I personally drew the line at rainbow macaroni and cheese, because this is one classic you just don't mess with.) Plus, every couple of months, someone invents a colorful new Sbux drink that goes viral and totally raises the bar. (See: Mermaid Frapp, Dragon Frapp, and every rainbow drink creation.) The demand for unicorn food and drinks continues, giving whole new meaning to the phrase taste the rainbow. We don't even care if it tastes good. As long as it's pretty.

While Tony Boloney's is certainly leading the way in the rainbow food trend at the moment, it's only a matter of time before someone else takes over headlines with the latest and greatest in unicorn poop food.