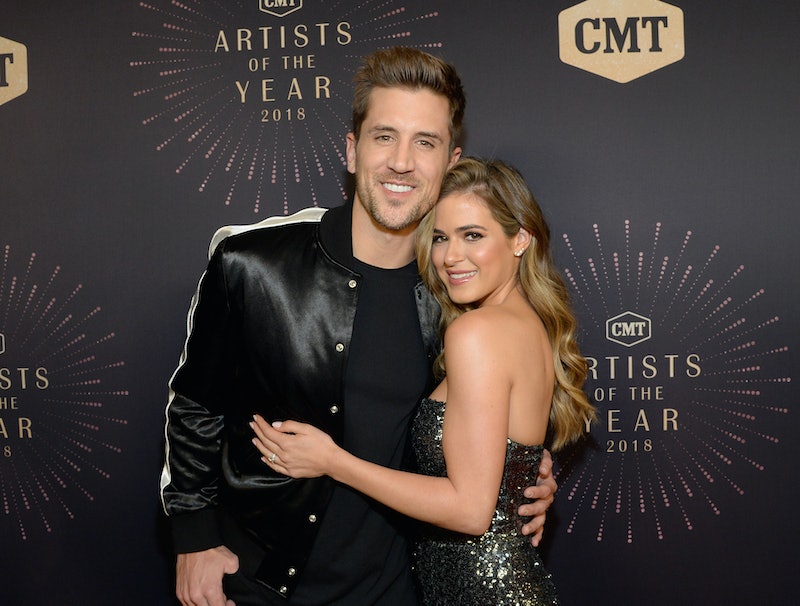 Given how many spinoffs the Bachelor franchise has — from Paradise to Winter Games — it can be tough to keep track of all the contestants. One couple that's flown relatively under the radar is Jordan Rodgers and JoJo Fletcher. So, what have these two been up to since Season 12 of The Bachelorette? Bustle got updates about Jordan and JoJo's relationship, straight from the former football player himself.

In late September, Jordan, who is partnering with Holiday Inn Express for their READIEST Breakfast Challenge, swung by the Bustle office to chat over a stack of pancakes — filled with bacon, sausage, and eggs. Even though Jordan and JoJo are still going strong, there's one subject the couple disagrees on. "Me and [JoJo's] biggest point of contention is figuring out where to eat. All the time," he says. "If it's before 1 o'clock, I'm like, 'It's still breakfast. We're getting brunch.' Her, not so much. She's not a big breakfast person."

Disagreeing over breakfast is just one thing fans might see in the couple's new web series called Engaged With JoJo & Jordan. "There's not really a great way to give everyone insight into what our relationship is really like," Jordan explains of the motivation behind the show. "You can do that kind of on social media, you can show bits and pieces of it, but this is as real as we probably ever get."

Jordan admits things weren't easy initially, especially with "all the crazy stuff that comes along with the microscope that you're under, and all the kind of drama that gossip magazines will spin up." He adds, "As much as you ignore it, that's tough... We're happy to get through it."

Now, JoJo and Jordan are sharing more of their relationship journey with fans. Of course, it's not quite like their time on the ABC series, since they're calling the shots — and it's just the two of them, not other contestants competing for love.

"The Bachelorette was great. It's also crazy to film," Jordan explains. "You have no cellphone, no internet, no TV for nine weeks... When you look back on it, I dated and got engaged to my fiancée and then I got her number. As weird and as fast as it happens, it's also very different and very real in a certain way."

As a result, they've had to find their groove off-screen, which has meant focusing on meshing their lives together, not rushing down the aisle. So if anyone is waiting for wedding bells, he admits point-blank: "We don't have a date yet. Once we do, we will let everybody know." Instead, their attention has been elsewhere — renovating their home, which led to a lesson in conflict resolution.

"We got a crash course through flipping houses, and through meshing our lives together," he says. "Because when you're dating on a reality show, everything's great. You get to travel to all these cool places, you're not paying for anything, like you're on a helicopter... It's a fairytale, and then you get to real life and you're like, wait, we never had an argument."

One way that they've managed to make things work is by, well, working. "What we were doing before the show, we kept doing after the show," he explains, pointing out they've continued to pursue their passions. "I think that plays into why [our relationship is] successful, and it's only gotten busier since then." For him, that's meant opening a coffee shop, owning a nutrition company, and working with the SEC Network.

Being so busy, they're big proponents of lazy nights in when they have the chance. "We're homebodies, big time." He adds that murder shows are "literally all we watch on Netflix." Oh, and they're fans of Jessica Biel's The Sinner.

If you want more JoJo and Jordan on your TV screen, you may be in luck. He teases they "have two other projects that we filmed that I can't tell you about" — yet. Maybe it'll be them sharing Netflix recs, or trying out new brunch spots. (OK, the latter is unlikely, but fans can cross their fingers anyway.)